Writing 'Climate' - the pros and cons of writing to brief 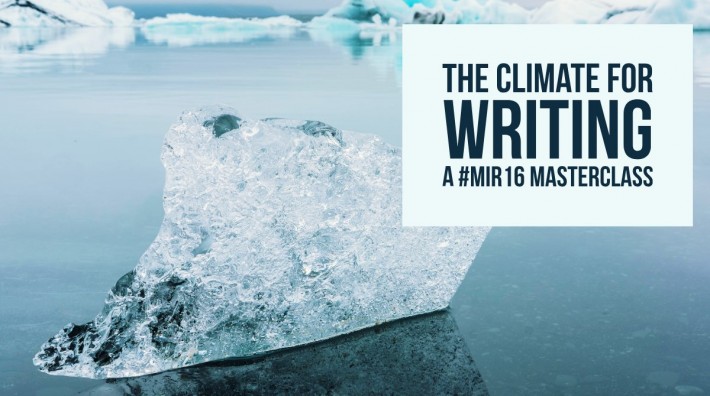 I recently participated in an event organised by Birkbeck College’s journal of new writing, The Mechanics’ Institute Review. MIR is planning the first of several themed issues. The inaugural one will be on ‘Climate’ – a broad concept, as we discussed.

Fellow writer Richard Hamblyn and I were invited to speak at the masterclass. Hamblyn is the author of several books on the environment and the history of science. We have also both been Writer-in-Residence at the Environment Institute at University College London, a post which encouraged us to work across disciplines with scientists to create a new piece of work.

Our brief was to speak about briefs, but we began by discussing what Richard suggested was an increasing conflation of and link between the words ‘climate’ and ‘change’. The latter naturally follows the former, now. It is difficult to hear the word ‘climate’ and have a neutral response, in the context of a world which is verifiably warming due to human activities. I began by taking inspiration – as I sometimes do – in etymology. ‘Climate’ has its origin as a word in Greek: klima. If you look into the etymology of that word, we find the same root as in ‘incline’ – a slope or angle. I found this fruitful, in thinking about climate: we talk of various kinds of climates, and it is frequently used as a metaphor: ie a climate of ideas. As much as a totalising reality, it signifies a leaning toward, or away, from something. But also an inclination suggests that one needs to take a position, or a stand.

As I told our audience that day, as a writer I had no problem taking a stand on climate change. I have been privileged - I do not use this word lightly, or in the humblebrag sense, I really do consider it a privilge - to have been given access to the polar regions, the open ocean, deserts and wild places, in pursuit of my work and writing. I have seen the accelerated effects of climate change first-hand. But I do find I am suspicious of and resistant to writing to a brief. Not because I don’t like being given direction or submitting to authority, but out of suspicion encoded in such directives, that writing be categoriseable or useful; that writing should incline itself one way or the other. I see this as a symptom of a larger ethos of insturmentalisation which increasingly defines our lived lives as much as our creative lives. Writing is not ‘practice’ as we say in the academic sphere –  this is just a pompous word for writing. And writers are not good for anything and are of no use to anyone, apart from seeking the truth and providing a barometer of what is actually happening around us. Writers are seekers and guides, but they often work best when they not need to know what it is they seek.

Writing, especially imaginative writing, is uncertain and exploratory, in other words. Properly speaking I have only written a book to a brief once, in the case of my novel The Ice Lovers (2009). This was my stated project when I applied for the British Antarctic Survey’s and Arts Council England’s now defunct International fellowship to Antarctica in 2005. When I was offered the fellowship my first thought was: will I fall down a crevasse? (my all-time least favourite way to die). My second was: can I really write this book I said I would write?

I sensed a trap, and it wasn't the crevasse. I had set it for myself. The fellowship served me a sense of mission and purpose, a frame of reference and a legitimacy. I learned a great deal about climate science, maritime history and polar exploration, all bodies of knowledge for which I am immensely grateful. Any creative block I experienced didn’t come from doing research, oddly. Nor was the Antarctic the first time I’d done research for work. As Alexander Chee notes in his excellent collection of essays How To Write An Autobiographical Novel (2018), ‘Autobiographical fiction requires as much research as any other kind of fiction, in my experience.’ I have never written fully autobiographical novels, but it is true that I’ve had to do more research for stories I thought were ‘mine’, in order to render places and people I thought I knew.

But the Antarctic learning curve (or incline) was unusually steep. Working in Antarctica was the first time I’d done quite so much research, and certainly the first time I lived the research in surround-sound. Knowledge, science, my life, writing, thinking, doing, even eating breakfast or sleeping, all became indivisible. In Antarctica I found there was no boundary between these activities. It wasn’t a topic. And in any case other types of writing – academic writing, journalism, require one to confront a topic, but fiction is too holistic and plasmic to be able to respond any single idea or place.

It’s evident that some writers find having a brief useful and galvanising. It structures their ideas and provides a compass. My conclusion, which I shared at the MIR Climate Masterclass, was that I found it difficult. In the case of my novel The Ice Lovers, I felt I had to get it right, not for myself but out of obligation and gratitude to the organisations which supported me. This sense of duty might have flattened my characterisation, or caused me to view the novel from the outside, as an informed reader would, rather than simply write it from the gut. But also, perhaps I lean too eagerly toward other people’s inclinations and try to please the idea. Or I become perverse and refuse to take direction. In any case a lot of energy is used up positioning myself against the brief. My own suspicion is that my best work has been plucked out of darkness.

My short story 'The Most Beautiful Voyage in the World' was a finalist for the 2018 Everything Change Climate Fiction contest run by Arizona State University. The resulting anthology of winning stories edited by Kim Stanley Robinson is available for free here: https://climateimagination.asu.edu/everything-change-vol-2/