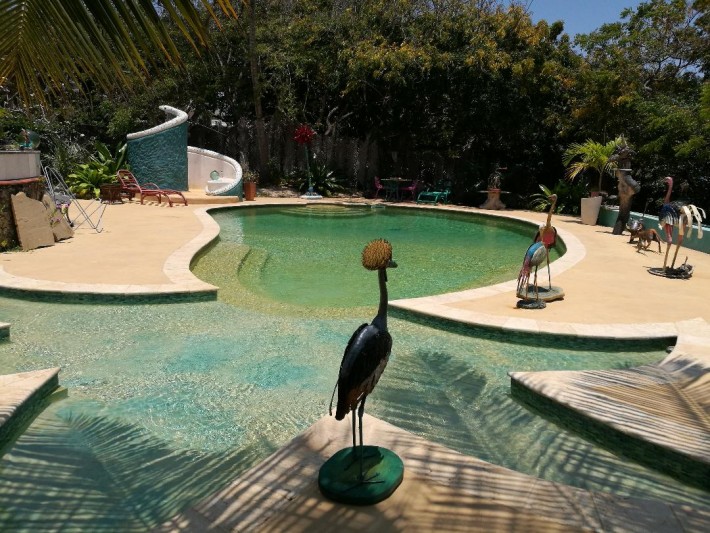 Lately I have been spending some time in a house with a large, uniquely-shaped pool. Having your own pool is of course a hedonistic indulgence. But the swimming pool has a complex character, both symbolically and in everyday life. Each day we have to measure the levels of chemicals in the water and refill it, thanks to the powerful evaporation rate in the tropics, but also extract errant monitor lizards, fish out the corpses of unfortunate field mice and ghost crabs who have drowned in its clutches at night, and watch monkeys gingerly lower their mouths to its surface to drink in the morning. The pool is a communal fount but also a potential sump of death.

The complex character of a swimming pool, as an object of leisure, glamour and play and also an arena of peril, emerges in many films and contemporary literature. The swimming pool’s allure is that of a cultural artefact, an object that transcends its own ontology to embody the supreme expression of the intent of the capitalist West, the destiny and destination of the leisured classes.

Swimming pools have existed since at least 2500 BC and have a long history, particularly in the Greek, Assyrian, Egyptian and Roman cultures. For the Greeks they were not only leisure sites but provided crucial training grounds for war, where water resistance was used to build strength. The evolution of the swimming pool both tracks the development of cultures and expresses key aspirations and values, from the athlete factories of the Soviet-era mega-pools to the thermal-heated purlieus of Iceland to the utopian gaze of Los Angeles’ infinity pools, oases of perspective perched above Mammon. The swimming pool has also been a locale of intrigue and passion and lassitude in equal measure, in recent literature and film: to name a few, The Swimming-Pool Library by Alan Hollinghurst, Swimming Home by Deborah Levy, Barracuda by Christos Tsiolkas and François Ozon’s 2003 film Swimming Pool and Luca Guagnino’s A Bigger Splash.

Other classics of contemporary fiction that feature a swimming pool are John Cheever’s ‘The Swimmer’, David Foster Wallace’s ‘Forever Overhead’, Kevin Canty’s ‘Blue Boy’ – all short stories, interestingly, by American (male) writers, all pairing the turbulent psyches of their narrator/characters with the exquisite and aspirational spaces of the pool. The swimming pool’s symbolic power functions differently depending on the culture: in the US as an emblem of wealth and leisure; in Europe as a zone of solar pleasure and encounter. In Britain it functions either as an object of suburban aspiration or as a climactic impossibility relegated to the continent and holidays, as in Rose Tremain’s novel The Swimming Pool Season, wherein the task of creating the most beautiful swimming pool has to be accomplished in France.

The pool functions as an enabler in many of these films and stories, an arena where interactions which would be impossible elsewhere are enabled by the buoyancy and egalitarian promise of the pool. They are zones where boundaries, corporeal, social, metaphysical, can be dissolved. As such they are metaphors for the liminal levity which escapes us in normal life, but which pools seem to enable even as they imperil those drawn to their seductive dissolution.

But now its time to go and sieve the beetles out of the water and change the chlorine.