The Streets – dreams and reality in the city-state 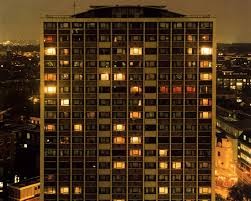 ‘My photographs show something which is abandoned yet somehow invisible.’ With these words, Rut Blees Luxemburg, a London-based artist working with photography, opened the eighth annual Urban Encounters symposium. Luxembourg’s canvas is London – its ‘modern remnants’ and its recent revenant transformation at the hands of investment and gentrification. What interests her is ‘the vernacular of urban representation.’

As Luxemburg takes the audience through her work over the past two decades, including two recent bodies of work, ‘London Dust’ and ‘Silver Forest’, it is evident how much this language of the city has changed. ‘London Dust’ examines the transformation of the City of London. It focuses on an as-yet unconstructed building, The Pinnacle. The futuristic nature of the building, along with its projected (unrealised) self, is hauntingly juxtaposed against the detritus and detail of the city – dust, enigmatic burlap sacs, and temporary construction-site equipment.

Luxemburg's perhaps best-known image, 'Towering Inferno', which illustrates this article, now has the presence of an historical artefact. Taken for her MA degree, the image was later used for the cover of the Streets' first album, Original Pirate Material, released in 2002. The publicity campaign for the album saw large-scale reproductions of the image plastered on railway underpasses and buses in the exact area where the image was taken two decades ago – Shoreditch and Old Street – and which has been the site of one of the most radical of transformations in London.

Gentrification is an urgent and divisive issue in London at the moment. From the recent controversy surrounding Brick Lane’s Cereal Killer café, to the forthcoming South Park series 19, which satirises the gentrification of the fictional neighbourhood (when South Park takes up an issue you know it’s really hit the headlines), the process of our cities’ transformations effects us all. The widening gap between north and south in England presents an extension of the same issue – London is increasingly a city-state, an economic island impervious to the fortunes of the rest of the country, a closed system.

‘Who owns our cities, really?’ This was the question posed by the symposium’s other keynote speaker, sociologist Saskia Sassen, in her talk ‘Cities – a window into larger social and economic realities’. Author of The Global City (1991/2001) and Expulsions: Brutality and Complexity in the Global Economy (2014), amongst others, Sassen delivered a brisk overview of the larger economic forces which are transforming our cities, and in particular, London.

‘The street is an indeterminate space,’ Sassen suggested, ‘a space which is under threat. We are losing our indeterminacy.’ This subject position – of contingency, uncertainty, of potential public power, a potential performativity, is critical to democracy. ‘The street,’ Sassen says, ‘is where those without power encounter power.’

But the street is becoming overdetermined – in London’s case, by wealth and one of its immediate effects: privatisation. Sassen took us on a tour of related developments which are shaping not only our urban environment but our subjectivity. None of these discrete elements were perhaps news to the audience, but their interconnectivity – perhaps even their collusion – is something Sassen has been studying with dogged statistical precision for some twenty years. Finance and digital technology have completely reordered our reality, Sassen believes, more so than the changing architectural character of cities such as London, which is in fact only a symptom of a far-reaching condition of concentrated wealth in private hands, and the concurrent declining wealth of governments. The result has been disappearances – large scale vanishings of low-income earners, modest householders, and those who can no longer pay their way as the city is transformed into a garrison of the super-rich. Cities are where these disappearances and transformations take on the shape of ideas, even dreams. ‘Cities’, Sassen says, ‘are objects of desire.’

My presentation at Tate Britain took the audience as far away as possible from these desirous spaces. I gave an illustrated talk on Antarctica – a streetless continent, where there are no cities, not even towns or settlements, and no capitalistic activity takes place, apart from a very limited tourism industry. The talk was impressionistic and explored how in such a space the human mind, conditioned by urban environments and man-made interventions in landscape, tends to imagine or even hallucinate these when they are absent. Streets, runways, planes, cars, birds, houses, even shops crop up in visions and dreams in Antarctica to a bizarre degree. Ultimately, most of us are urban creatures. We orient ourselves in space via the grid pattern of cities, or at least the expectation that man-made infrastructure will soon appear. I explored the concepts of visual illusions and perspective, and that of the field, in the Antarctic: the field of vision, field of action, and, simply, ‘the field’ – the term used in Antarctica for when you leave one of the scientific bases and fly out into the continent.

Lara Almarcegui’s work explores similar themes. We joined forces for our panel, Disappearances – Traces in the Landscape, chaired by Diego Ferrari. Almarcegui works with construction processes and materials, making manifest the disappearances that accompany building projects. She has filled vast exhibition halls with perfect conical mounds of the brick, mortar, cement and sand used in building works, and has even buried an entire demolished house for a site-specific work in Texas, USA.

Lately Almarcegui’s attention has lately turned to the underground. After two projects in which she calculated the entire mass of rocks and minerals in the landscape – including one project in Spitsbergen, in the Norwegian Arctic – she is now pursuing a project titled ‘Mineral Rights’. ‘Who owns the ground beneath our feet?’ she asked. She was not speaking about freehold, or owning the ground on which a house stands, but the mineral wealth of the earth, from the crust down to the planet's magma core.

Almarcegui decided to pursue these mineral rights, to see if she could acquire them. She quickly discovered that in many countries mineral rights are the property of the state, which will lease them only to exploration companies such as mining and oil conglomerates. Only in Norway could she manage to purchase the mineral rights as an individual, and only for the most common and cheap mineral – iron ore. These she duly bought, and has made an artwork documenting the surface land of her personal concession.

There is a direct link between the Antarctic, Almarcegui’s project and Saskia Sassen’s question of who owns our cities? The very ground beneath our feet is for sale, from the surface structures right down to the centre of the earth. Except in Antarctica, which is owned by no-one, but governed by an international treaty which has declared the continent off-limits to any activity other than scientific exploration. The Antarctic is the anomaly; the only place in the world which is nobody’s country.

‘What we have seen, with the increase in real estate values in cities like London, is a land grab,’ Saskia Sassen notes. This promises a new order, one which has the power to kill indeterminacy. What can we do? Sassen advocates ‘transgressive architecture’ – making small interventions in the landscape, in particular in the built environment, which have no function other than to say, we are here. This space is not owned by anyone other than the citizens. We have rights. ‘The mass of people can unsettle the logic of power,’ she said. We need to re-mark and re-make spaces, particularly urban spaces.

As for the Antarctic, it lives on outside these tussles for power and control. The Antarctic is not quite utopia, however, rather, in the words of US critic Rachel Weiss, ‘a numinous, intensely suggestive landscape, whose despoliation denotes not ‘merely’ environmental, but existential danger. Its unique psychic power is both other-worldly, and harshly real.’

Urban Encounters exists to provide a platform for discussion on how ‘the street’ might be experienced. But as we learned this year, in some cases you have to draw your gaze out, to a level abstract and metaphorical yet indubitably real, to get a purchase on the forces which are constructing and altering our urban realities. To return to Rut Blees Luxemburg’s work, her image ‘The Pinnacle’, featuring the spiraling building in London’s Bishopsgate whose construction is permanently stalled, is a haunting relic of a possible future for this city – one of vertical dreams, a vertigo of ambition and exclusivity. Is this the city we want? We imagine our futures into being before they happen to us. This is the responsibility of the artist and the sociologist alike – to see the reality encoded in the dream.