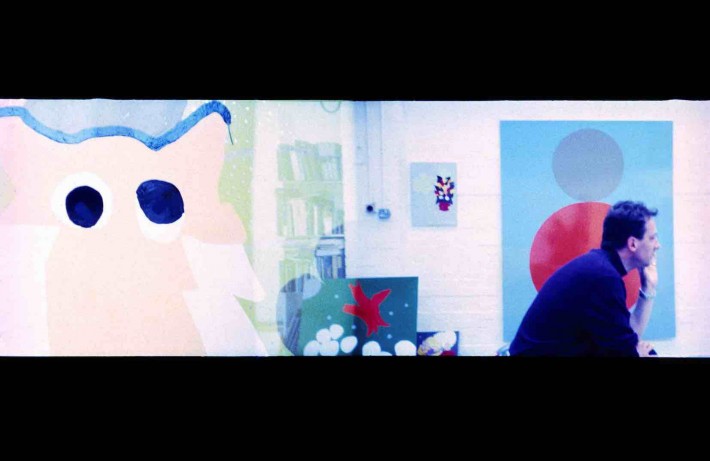 Space at the Centre: London 1994-2007 interprets a crucial era in London's startling transformation over the past three decades, focussing on the lives and work of a generation of artists, many of whom have come to define British art over the last two decades. Produced with a customised 35mm analogue camera, the photographs also showcase the architectural transformation of London's public space, including key cultural and art institutions. Twenty-five years in the making, Space at the Centre is the first solo show of a selection from an extensive archive of some 1,800 photographs. It is a testament to a golden age of British art, architecture and literature.

For the exhibition catalogue I have written an essay, 'The Fate of Place'. Here is a short extract from the beginning:

A glass spiral, or what appears to be a spiral, disperses into space, punctuated by some sort of funnel. Figures – humans – are suspended in a Perspex catacomb within. In the background a German flag appears atop a building, a remnant of a building of an older architectural approach. The image looks not unlike the interior of a lighthouse bulb, transparent petals carving tranches of sky. How to make sense of this visual puzzle? The image described above is titled ‘Reichstag, Foster & Partners, 2002’. The sober architectural caption suggests we should view it as the record of the work of one of the best-known practices on the planet, but the building has been taken apart by the lens and re-assembled.

Whether of interiors or exteriors, inhabited or de-peopled, the images in Diego Ferrari’s Space at the Centre present the viewer with visual and narrative conundrums: why the panorama format? Are we looking at continuous or discontinuous spaces? Are these spaces and buildings in construction or deconstruction? How should we read the story that unfolds within? I have an advantage in interpreting these photographs. I was present during the making of some of the images exhibited in this important, career-defining show and am the subject of at least one. So inevitably, perhaps, this essay will be a subjective reflection on Ferrari’s diaphanous, subtle body of work.

I am seeing some of these images for the first time in decades. Regarding them is an eerie experience. I remember how much I have forgotten: the grainy, hesitant texture of youth, of being in an analogue process of becoming; the deserted nocturnal precincts of Hoxton and Shoreditch; the certainty that the future would be better than the past. Here we are, artists, curators and writers, as yet uncompromised by ambition, ego, social media, money, in suspended animation in the tungsten light of England, captured in ethereal panoramas. In 1998 Fiona Banner stands, one hand on hip, another hand gloved to protect her work in the Tate Britain, where she had her first major solo show at that gallery. Hanging his works Hound, Cloud 9 and a wall painting, 100 Years, at the Camden Arts Centre in 2000, Yinka Shonibare gives the camera a frank yet oblique look. We see Bob and Roberta Smith in 1997, surrounded by children and cups of tea as they hang their now legendary show, MAKE ART NOT WAR.

Nearly 25 years in the making, Diego Ferrari’s Space at the Centre is an artistic experiment that expanded to become a larger investigation into the documenting of space and time. The images transit from photography to cinema and back again, screenshots from a still-unspooling film. Within their tableaux vivants is an exploration of the poetics and ideology of the city, and of the definitional tension between space and place. The images stand at a crossroads of architecture, art, photography and everyday encounters. The gaze is not that of the disembodied photographer, but is intimately entangled with the scene the image depicts. The viewer is aware, implicitly if not explicitly, that these images have been constructed within the contingency of the moment, which – like any instant – harbours countless potentialities.

The filmic quality of these images reminds us of cinema’s essential project of the continual reinvention of space. Ferrari’s images are dioramas – artfully presented scenarios which have an element of the artificial but whose emotional charge derives from naturalism. At once improvisational and performative but also intimate, subjective constructions, the photographs collected in this exhibition blend different approaches to photography. The emotional language of documentary photography is aligned to the inquisitional gaze of portrait; these elements are mixed with the reverie of cinema and the observational approach of street photography.

For these images Ferrari used a disposable camera of a kind which could be bought at the time in any Boots or WH Smith for five pounds. These holiday cameras were a sort of precursor to smartphones in that they made it possible to take images without emotional or financial investment in their outcome. The drama of Ferrari’s image-making lies in their composition. These are not montage or collage (never mind Photoshop, which did not exist when the majority of these were taken) but were constructed within the camera. Ferrari was able to do this by disabling the film advance mechanism and re-purposing the shutter. As such these photographs are the product of an unusual alignment of technical mastery and rusticity. Because Ferrari built these images blind, as it were, there was a high attrition rate; the accidental quality of many of these photographs is part of their mystique. We see floating scenarios, contingent actualities, captured in the extended utopia of the panorama. In elongating space beyond the cuboid boundaries in which we usually perceive it, the panorama pitches us into the realm of stereoscopic vision, even into three dimensionality. Emotionally, what the panorama pursues is a hunger for more time, more space, than we are normally allotted in an ordinary life.