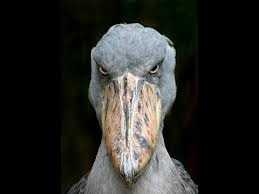 Uganda is home to spectacular birds. The country’s location in central eastern Africa accounts in part for its extraordinary diversity, with over 1,000 species recorded in a landmass the size of the UK. Its habitats include all the classic African biomes: wetlands, savannah, montane and tropical forests. The result – over half of all African bird species can be seen in Uganda.

Many serious birders travel to Uganda with one thing in mind: to see a shoebill stork. The shoebill is more akin to a pelican or a heron, but its extraordinary long legs and size mean it is often classified as a stork. Whatever its taxonomy, it remains a prize tick on any African birder’s list.

The shoebill cuts a decidedly odd figure: a gunmetal grey body perched on Giacometti legs, an anvil head bent as if in supplication. In part because of its rarity and the impenetrability of its swamp habitat, it is frustratingly hard to see – needles and haystacks come to mind.

I have just returned from a birding safari to Uganda, facilitated by the buoyant and indefatigable Tony Byarugaba of Mamaland Safaris. On our final day, a hot late afternoon, we boarded a wooden canoe and set out into the matted swamps of Lake Victoria near Entebbe. Only nine birds live in an area of 200 square kilometres. ‘We will have to be lucky,’ Tony said.

Despite his use of the imperative, I didn’t for a moment think we would actually see a shoebill. It was late afternoon, and early morning is a more optimal time. ‘It often takes many hours of patience,’ Tony said. We had only two hours before dark.

We punted along narrow channels dredged from the swamp that hugs the northern contours of the lakes. The light was golden and serene. Pygmy ducks took flight at the near-silent approach of our canoe. We stood in the moving boat, scouring the swamp with our binoculars.

‘He is here,’ Ishmael, our scout said, clambering down from his precarious position balanced on the gunwales in the bow. I thought Ishmael had spotted a friend. ‘Who?’ I said. ‘The shoebill,’ Ishmael grinned. I couldn’t believe our luck. We had been searching for only ten minutes. We stuck our poles into the thick papyrus reedbeds, hauling our boat toward a thicket. There, beyond a clump of vegetation, was a bird as tall as a twelve year-old boy.

The name given to it by the first European taxonomists who saw it was ‘whalehead stork’. Its thick, manila-coloured bill does look like a medieval peasant’s shoe. Two round, yellow eyes blink slowly, protected by a nictitating membrane. Its eagle-like gaze and hooked box of the beak is the last thing you want to see if you are a lungfish – the principal diet of the shoebill in Lake Victoria.

‘Prehistoric’ is an adjective often attached to the shoebill. Part of the bird’s appeal is its gargantuan proportions. The shoebill can stand 150 cm (nearly 5 ft) high and its feet are possibly the largest in the avian kingdom, with its middle toe alone reaching 18 cm in length. In flight its wings unfurl to nearly a metre in length; its wing-flap rate, at 150 flaps per minute, is one of the slowest of any bird. In flight they seem to be kneading the air. 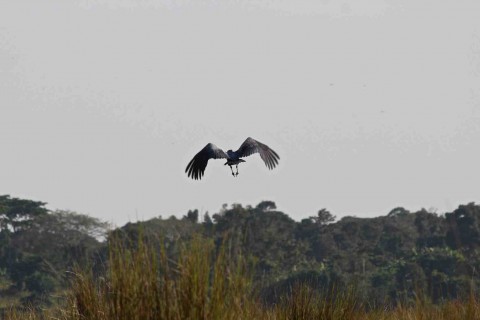 The shoebill’s population is classed as vulnerable. Up to 5,000 of the birds exist in swamps that stretch from southern Sudan to Zambia. It is slow-breeding and extremely sensitive to disruption by humans. Habitat destruction is its primary foe.

We watched and lurked in the canoe. The shoebill was about 50 metres away. It stood completely still, its back toward us. One of our punting poles struck a branch, and although the sound was muffled the shoebill heard it.

We watched as he levered himself into flight. His long wings flapped languorously, as if we were watching slow-motion footage of a bird gathering its powers. For a moment he hovered, spider-webs of his feet poised above the swamp. Then his box-like bill and tufted crest were airborne, and he floated away.

We carried on in our canoe for another hour and a half as the sun lowered itself into the western rim of Lake Victoria. We didn’t see another shoebill and I didn’t expect to. Our bird was an apparition. I pictured him lurking safely in an inaccessible quarter of the swamp, standing stock still and alone, waiting for lungfish in the night.

Tony at Mamaland safaris is highly recommended. He can be contacted on: info@mamalandsafaris.com or on +256 772482462.