M is for Memoir – what makes memoirs work? 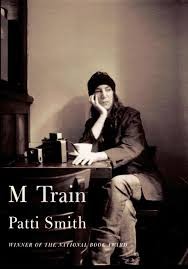 Christmas is upon us, and this year I’ve been given two memoirs as gifts: Instrumental by James Rhodes and M Train by Patti Smith. At the same time I am at last last getting round to reading Geoff Dyer’s Out of Sheer Rage, an anti-memoir about failing to write a critical study of DH Lawrence. Earlier this year I read Helen MacDonald’s affecting and elegant H is for Hawk, and I am at the moment re-reading Aidan Hartley’s The Zanzibar Chest, a memoir which, when I read it first two years ago, I thought monumental, epic – in a league of its own. These books have nothing in common apart from the label memoir, which has become a sort of default category for the uncategorisable.

I am asking this question, of what makes a good memoir, somewhat belatedly, given that I am about to publish my first memoir in a few months. Let’s take the measure of this changeling category. Memoirs have lately become ambitious. No longer is it enough to tell a personal story. They are now charged with providing much more bang for one's buck, even if their basic currency remains personal transformation. At meta-level, memoirs are still about a journey from innocence to experience. Challenges are met and overcome; understanding and reconciliation are the spoils of a fight played out against a canvas of larger events and in the dank antechambers of the inner life.

Memoirs also require memory work; harmony is also achieved through the pas-de-deux between the past and the present self. The narrator-self in memoir is a hall of mirrors, casting and then revising its reflections on the past. The narrating self knows the future while the past self is unaware of what is yet to come. This creates an instant pathos and also a dynamic narrative tension.

But beyond this basic narrative premise, vexing aesthetic questions lie. Who narrates a memoir? It would seem obvious: the writer, the self. But I think it is more accurately an alter ego. This voice is that of the writer, and yet also not. As Ian Thomson, my colleague at UEA and author of several works of non-fiction has said, the main challenge in writing a memoir is finding a ‘congruent’ voice. It’s an unexpected word for literary criticism. Congruence is usually used in maths and geometry. It means ‘agreeing’, ‘accordant’, and ‘coinciding at all points when superimposed.’ The congruent voice is, I think, one that changes as events happen but which is also consistent enough to give a book coherence.   This ‘I’ is the authentic voice of the author and simultaneously a literary construct. If a writer can achieve this amalgam without sounding false, studied or precious, while also adopting a voice which the reader will want to listen to for the course of a book, then congruence has been achieved.

Dyer’s Out of Sheer Rage is the most non-conformist book in the crop of my current memoir reading: not so much memoir as literary auto-criticism. Patti Smith’s impressionistic, episodic M Train, which has won the National Book Award (US), is, as Smith writes, about ‘unexpected encounter[s] that slowly altered the course of [one’s] life.’ James Rhodes’ Instrumental is subtitled ‘A Memoir of Madness, Medication and Music,’ and duly tackles all three Ms. The Zanzibar Chest, meanwhile, spirals beyond the perimeter of its author’s life to encompass wars in Somalia, Ethiopia, Rwanda and Burundi, witnessed during his years as a reporter, as well as his father’s life in Yemen and later, Tanzania and Kenya.

The selves in these books – experiencing-selves, narrating-selves, watcher-selves - ebb and flow. The exact quotient of inner life matches each book’s spirit (melancholic and introspective, Smith writes, ‘I skip Thanksgiving, dragging my malaise through December, with a prolonged period of enforced solitude, though sadly without crystalline effect.’)  Memoirs need a voice which transmits the sensibility of the consciousness that produced it, and also rings in the head of the reader in a way that does not grate. The voices in these books are all completely distinct: Smith – ruminative, grave, floaty; Rhodes – irascible, frenetic and caustic; Dyer – elliptical, indecisive to the point of neurosis; Hartley – ascetic, stern, undeterred.

Voice and narration are only half the task, however. For plot, a memoir would seem to have an obvious design: the writer is governed by what actually happened. But this is far too simplistic. Events in memoir are not only happenstances but a patterning. The mind is an unconscious seeker of patterns; it is the memoir writer’s search and revelation of an underlying structure to existence – and therefore, by association, the suggestion of a logic in the seeming inchoate distribution of events in all our lives – which creates a formal and aesthetic pleasure in reading memoir.

My feeling is that, however insightful or well-written, memoirs become exceptional when they are built on a purpose larger than the journey of the self; in doing so they posit a theory of existence as much as tell a story. In Smith’s’ M Train, her affinities build a lattice of enigmas which seem to underpin her existence: the obscure Continental Drift Society, which espouses a vaguely esoteric approach to the hard science of oceanography, tectonic plate movement, and meteorology; the writings of Jean Genet; dreams. A lesser mortal would not be able to get away with such a wayward, abstruse narrative approach. But Smith’s Sebaldian vignettes are also historical document, a testimony to a life lived at the epicentre of 1970s and 80s counter-culture. The Zanzibar Chest, meanwhile, is an epic, investigating how the currents of history and individual lives collude and retreat, and even the nature of history itself, as played out through savage conflict. Hartley’s narrating self is somewhat effaced by his sense of purpose in his role as a witness.

But beyond all this technical astuteness is a more subtle formal challenge which must be mastered. If a memoir is to work, the book’s structure has to mirror and express the memoir’s sensibility. In Rhodes case, his chapters are ‘tracks’; ‘Track Four: Bach-Busoni (James Rhodes, Piano)’ is about how a dark, furtive score became his refuge, just as he describes the ongoing abuse he suffered as a child. In M Train, Smith has vignette-chapters whose titles could easily be songs - ‘How I Lost the Wind-Up Bird’ and ‘Road to Laroche’ - and which advance her thesis that life is a series of parsable conundrums. Hartley's memoir is structured in long chapters with a single image as a frontispiece, a suitable scaffolding for its epic, formal exploration of the complexities of history and politics. Meanwhile Out of Sheer Rage begins as a paragraph-free frustrated rant, which settles into the stately, relentless cadence of the state of bored possession.

For my memoir Ice Diaries: An Antarctic Memoir, which will be published in March 2016, the substance which the book is about – ice – gave me its formal and emotional structure. Each chapter is headed by a term from sea-ice nomenclature, an official document which describes the kinds of ice encountered at sea and on land in the polar regions (there are over a hundred). The ice term which heads each chapter embodies the emotional energy of what takes place in its confines: ‘hummock’, for example, is a pressured, ridged ice that forms at the base of glaciers typically, the product of severe stress.

This is what memoirs do, ultimately, and perhaps the key to their popularity: rather than tell a personal story, they uncover the pattern of reality – the real story, so to speak – obscured by the life one lives, which is in the end only a decoy for a more profound truth. To quote a popular Facebook homily, memoirs demonstrate that the journey really is the destination.