The Lives of Predators: H is for Hawk 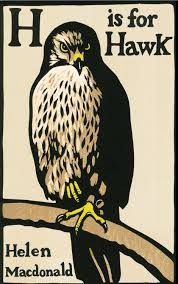 Of all animals, the lives of predators are perhaps the most difficult for us to imagine. I was reminded of this recently, when I interviewed the acclaimed writer Helen MacDonald for the UEA literary festival about her recent book, H is for Hawk. MacDonald’s book draws a vivid portrait of the world as a hawk might see it, while telling many stories, most prominent of which is the story of her acquisition of a goshawk, Mabel.

As anyone who has observed them in the wild will know, goshawks are fierce, relentless predators. Along with eagles, falcons, kestrels, harriers and buzzards, they are part of a varied and large family of raptors – birds that kill. Raptors’ quarry includes other birds and small mammals – rabbits, hares, monkeys, even small antelope, as well as snakes and lizards. Raptors’ physical power and flying speed allows them to take on animals nearly twice their size. MacDonald’s account of her life with Mabel is one of the main pleasures of her elegant and heartfelt book, which has managed the rare honour of winning two major literary prizes in the same year, the Costa Book Award and the Samuel Johnson Prize for Fiction.

I’ve spent a lot of time in the African bush in the company of predators, and have watched raptors in their natural environment. Goshawks were temporarily extinct in the British Isles, before being ‘accidentally re-introduced,’ as Helen told us, often by their keepers who lost them, or let them go. Africa remains home to the kind of large land predators which died out in Europe long ago – lions were probably present in the Balkans, and other wild parts of southern Europe, until 500 years BC. In sub-Saharan Africa there is ample opportunity to observe leopard, lion, hyena, or the large eagles that still give me pause when I come upon them: the Martial and Verreaux’s, the Steppe and Tawny eagles, which, perched in the acacia tree like a hunchbacked angel of death, training their canny eye on the land, look convincingly menacing.

The lives of predators lives are complex – more so than might seem. Recently in Kenya’s Tsavo East National Park I watched a starving lioness stalk a solo waterbuck, and for once my allegiances (normally firmly with the underdog) were torn. The lioness was a woesome sight, with her dull dun fur, hollow eyes, and Viking longboat ribcage. Predators often have a hard time making a living, despite their frequent advantages of strength, speed and ferocity. In the case of the lioness, she seemed to be on her own – she had been cast out of her pride, perhaps. This can spell death for sociable cats.

To walk in the African wilderness is to be vaulted back in time. A human being returns to hominid state. On our Tsavo trip, if our vehicle were to break down at dusk, and we were forced to walk unarmed through the crochet of trees and boulders and rivers that make up the park, we might find ourselves stalked by predators whose capacities far outweigh our own. Our vulnerability means we cease to become a subject and are instead objects. Our feet can’t help us; we can’t out-run any of the so-called ‘Big Five’. Even the lumbering hippo can sprint 34 kilometres an hour; a crushing blow to our dominion. A single swat from the paw of a male lion can remove your face. A leopard can kill and disembowel a human within a minute. A cheetah seizes the throat, asphyxiating its prey before puncturing its intestines.

Of all predators – the lion is the most fearsome, and the one most visitors to Africa come in the hope of seeing. I’ve seen plenty, but one of my first encounters with lions stands out. It was a hot but overcast afternoon in a reserve in the Lowveld, a humid forested chunk of South Africa’s Limpopo province. I was sitting in the tracker’s seat on the bonnet of a Land Rover; the tracker’s viewpoint allows him or her to see not only the tracks of animals in the substrate, but they are often the first person to spot wildlife, aided by the mere metre or two advantage in advance perspective that comes from being perched precariously on the front of a car.

We pushed through thick bush. Several times I had to hop off the bonnet and help the driver negotiate hidden tree stumps, stones, and invisible small ditches. Each time I left the vehicle I was vulnerable: we are safe among lions even in an open Land Rover because lions see a vehicle as a single entity; they have not yet mastered the concept of ‘inside’. Sitting on the bonnet is similar. As long as you stay very still, the lion thinks you are an outsize ornament, the equivalent of the Jaguar mermaid leaning out over edge of the hood. But if you move, it's a different story.

We finally pulled up to a clutch of lions. A male and three females were dozing in the afternoon heat underneath a tangle of Sicklebush trees. The driver killed the engine. I remained, motionless, in the tracker’s seat. For a long time we watched the lions sigh and snooze. Suddenly, the male lion’s head appeared above the willowy Red Oat grass. Then his shoulders, round and smooth with muscles like loaves of bread rippling beneath his coat, hove into view, like a small terrestrial ship. He was on his legs and yawning.

I watched him approach. He floated past me, right in front of the bonnet. I saw a universe of nicks and scratches on his flank, and small black scars like minor rivers. His mane was coarse and matted with devils’ horsewhip, a burr-like weed. The meat smell of his breath reached me from his open mouth. I saw his yellow incisors; at their base was a band of pink, healthy gum. As the lion passed he flicked me with his tail. It hit my calf – it was rough, like being brushed by sisal, and I wanted to scratch at it.

I knew then what would happen. The male lion would turn, sinuously, his neck muscles bulging, and look at me. The briefest contact between his tail and my calf had somehow registered. He might have felt flesh.

He seemed to be looking at me, but I was in the middle distance, as if he couldn’t quite see me. I met his gaze. His amber eyes gave me an abstract, distracted look. But then a new note burst to life within them. A fixity. Behind me, the driver started the car and we backed out, wheeling around in a wide arc that seemed to take forever, the lion’s depthless eyes on me.

‘The hawk is stranger than I thought,’ Helen MacDonald writes, of Mabel, when she is still getting to know her. The sentence is typical of the pithy economy with which she often writes in H is for Hawk, but also it conveys something of the dank marvel of her new charge. It’s true – there is a strangeness in the world of the predator – a world of the vortex of instinct and reflex, of remote firings, like quasars, building trapezoidal shapes in the brain which say: Hunger. Meat. The starkness, the otherness of a creature without affect or pity might be one of the capacities I saw in the mineral eyes of the lion that day.

One of the many things I like about MacDonald’s book is its attempt to show us the world anew through the eyes of her hawk. Through the vividness of Mabel’s world a species ventriloquism takes place – the quality of Mabel’s attention becomes our attention. The human being is complacent, inattentive, we understand. Through her months of almost solitary confinement with Mabel, MacDonald herself became the goshawk, she felt: ‘I look at Mabel. She looks at me. So much of what she means is made of people.’ Yet when she takes the hawk hunting, she is reminded that they are a death-dealing duo. She has to confront the dying animals in Mabel’s talons, just as Mabel devours them alive. ‘The hawk is on my fist. Thirty ounces of death in a feathered jacket; a being whose world is drawn in plots and vectors that pull her toward lives’ ends.’

Although Mabel is doing the killing, killing reminds Helen that she is alive. Death and life are the same energy, the same source. MacDonald writes that her life Mabel took her to the edge of being human. There, she encountered a simpler, but more powerful mental landscape. This is one of the transcendences we can experience, in close contact with predators: to be conveyed the edge of the human world, and an encounter with our own rapaciousness.

Proximity to the predator gives us the appeal of seeing the world anew. It is a more vital realm, less neutral than our world of safeties: ‘The world she lives in is not mine,’ MacDonald writes. ‘Life is faster for her; time runs slower. Her eyes can follow the wingbeats of a bee as ours follow the wingbeats of a bird. What is she seeing?’ This is part of the magnetism of predators, and few predators can match the mortal glamour of the lion an the hawk: the vitality of the death-bringer, how we can be resurrected by fear.

When we discuss this on stage, MacDonald makes a startling statement. ‘I don’t think predators are that foreign to our consciousness. Man is a predator, isn’t he? We are the most numerous and destructive predators on the planet.’

My encounter with the lion was only an early one of many. Even if we are both predators, the lion and I, we are not equal. I always feel chastened, among them. They make me realise how unused I am to being in the presence of an animal so secure in their power. Many animals recognise us immediately as the enemy, and stiffen. The lion regards us as from a parallel dimension, possibly of flux and hunger, of insatiable drives, but who knows? We admire the clarity of the killer, perhaps, even as we are appalled by its remorselessness.

‘I felt incomplete unless the hawk was sitting on my hand. We were parts of each other,’ MacDonald writes. One of the most compelling narratives of MacDonald’s complex book is that of her search for a mirror, another self, a spirit-version, if you will, of an aspect of our innate selves. MacDonald found it in Mabel. I have never found this corollary myself in the wild, but then I haven’t spent enough time with a single animal to enact it. What I do know now is that in the predator we both see our reflection, but beyond it, something else. Looking into the depthless eye of the killer is like looking into a piece of Claude glass, those landscape mirrors Victorians carried with them, to better enjoy the lineaments of the landscape. We see our reflection, but the contours, too, of another, never-inhabited self. Who might be – like the origin of Mabel’s name, from amabilis, Latin for lovable – a version of ourselves, a wary friend.