Letter from the Indian Ocean 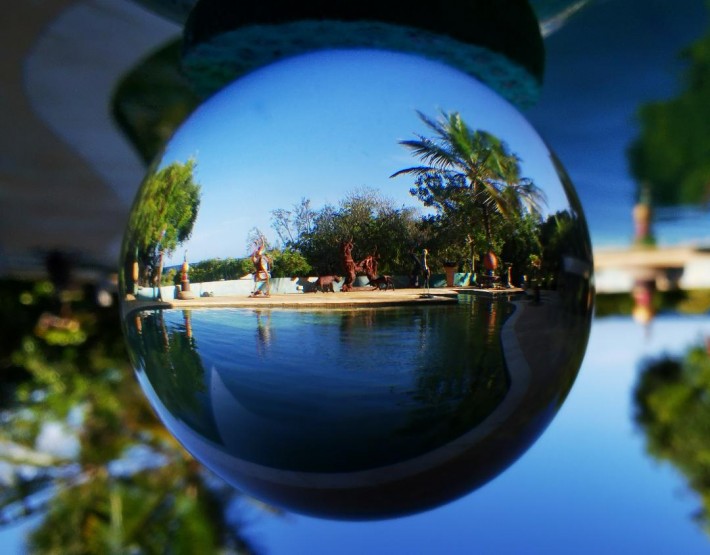 Sundays on the lip of the Indian Ocean are always eventful. Most people are at church and there is far less traffic on the slim tarmac road that arrows down the peninsula. The retreat of the human world and quietude creates space for other creatures to step into the foreground, like neglected Shakespearean pages kept in the dark wings.

First, a plated lizard. I flip on the kitchen light at 6.20am and there he is, a low-slung waddler, marching around the kitchen. Eventually he slides underneath the fridge, his favourite hiding place. He thinks he has made himself invisible but his long narrow tail sticks out from underneath the freezer. Two hours later as I am preparing breakfast I will place some off-cuts of mango down on the floor for him. Plated lizards love mango.

This sympathetic gesture backfires, because after breakfast I encounter a mangrove crab tap-dancing in the hallway outside the kitchen. These creatures have huge red-grey carapaces and live in the cement-coloured mud of the mangroves. The nearest one of those is about a kilometre away so I don’t know what this crab is doing here. Soon enough I discover a wedge of mango skin in his pincer. (Mangrove crabs have one huge claw like a pair of pliers, and a smaller one so tiny by comparison it looks as if it is in a stage of arrested development.) I wonder if the plated lizard got any breakfast before the crab muscled in.

Later, just before lunch, I hear an almighty scuffle in the kitchen entranceway. I’ve evicted the mangrove crab by this point, so it can’t be him. I peer around the corner to see two plated lizards, males, rolling over and over, a sinister two-headed serpent. When male plated lizards fight they latch on with their sharp little incisors and turn each other over and over like a Jurassic tumble dryer. They often do this until one of them is dead. With a broom I separate them. The larger lizard goes out the door obediently. The loser would rather confront the broom than be around the other, so he refuses to exit and disappears under a cupboard.

After dealing with the plated lizards I read the UK news. I’d woken up at 5am this morning with a name lodged in my head: Kemi Badenoch. I’d hardly heard the name in my life before this week, although it did ring a dank bell. Now it is bouncing around my dreams like a loose cymbal. This is a Black woman who is ‘anti-woke’; further proof that false consciousness endlessly reinvents itself. What are the origins of this pathology? Why is it so prevalent in British politicians from immigrant backgrounds?

At dinner that night friend espouses admiration for RwandAir, the national carrier of a small African nation which is punching above its weight in the airline business. Given how much I work and travel on the continent, few things are closer to my heart than an efficient African airline. But I explain I won’t fly RwandAir for ideological reasons, firstly because it is an autocracy whose president presides over a similar Alice in Wonderland mythology. Secondly, because of its craven complicity with the UK’s recently inked agreement with Rwanda to offshore asylum seekers, a move that previously could only be described as dystopian. This is how all reality feels now: distorted, wilfully disfigured but transformed into a dimension stronger than reality, by a realm I can only call phantasmagoric, fuelled by hate and spite and dark, dark dreams.

‘Africa is not ready for democracy,’ my friend goes on to say. (He is African). ‘We need a strongman. Look at Rwanda. That place works, man. I was able to set up a business for a friend there in seven days using just the internet. No bribes! Imagine. I didn’t need to bribe anyone.’

‘I don’t agree with the idea that an entire citizenry needs to be oppressed so that people can top up their mobiles and pay corporation tax online. Your friend set up his business in seven days in a country where everyone lives in fear.’

I try to banish Kemi’s name and the wildlife incursions by going for a walk on the 10 kilometre-long beach. But the lizards’ arrested death spiral and watching my country go to these dogs lined up at podiums spouting tax cut promises and a bonfire of EU laws and red tape won’t leave me. These debates and newspaper profiles are for whose benefit? Not ours, not even for the 100,000 card-carrying members of the Conservative party, who it seems get to decide our fate, and who don’t read The Guardian anyway. Every time I read another article about the Conservative party leadership contest my disenfranchisement is confirmed anew. Welcome to Chessboard Britain, where black is white and white is black and Jacob Rees-Mogg is Minister for Brexit Opportunities. We have slid down the rabbit hole into a looking-glass world where the country will be temporarily incinerated in two days’ time and we are powerless to do anything because the entire system has been broken.

High tide approaches. We’ve just come off a full moon in a spring tide and the ocean crashes ashore with a hungry ferocity. The winter monsoon, the Kusi, brings seaweed, plastic rubbish and flotillas of pretty but painful star-shaped blue jellyfish called Porpita to our shores. The long shadows of afternoon are draping themselves over the litoral.

This sleepy swathe of the Indian Ocean sits on the outskirts of history. This is one of the reasons why it this stretch of the Indian Ocean works for me as a retreat. The silk light, the lemon mornings, the anvil-shaped clouds that troop across the horizon. The place is balm but it also makes me want to write. I am always reluctant to leave this ocean, the tropics, this country. So much more so now that I am returning to dysfunction, bad faith, infrastructure failure, strikes, all a product of a wholesale hijacking of the British people in order to feed the Brexit gorgon. Meanwhile in the UK it is forecast to be 40 degrees, a temperature likely never before felt in the British Isles. The heatwave is more than a weather phenomenon. It is a symbol of how we are now in a realm where there are no limits, or those we thought existed have been overwritten, just as there is no barrel deep enough for the Conservatives to scrape. We are on an Orphic track, borne inexorably underground, deeper and deeper, until we hit a chamber from where there will be no escape.

This morning I saw a white browed coucal fly from bush to bush over the tarmac road. She was followed by two youngsters, their russet feathers flashing in the rose-dawn light. Two Blue-naped mousebirds carry on a dialogue in their mournful call, perched in a young casuarina. Later in the afternoon a pair of African green pigeons, which used to be plentiful and now are rarely seen, swooped in from whatever dimension they occupy, and regarded us coolly from the same tree. These events press their reality upon me, leaving a seal so different from the tread of the human world, more ephemeral and less poisonous. They do not add up to a story, that cause-and-effect freight train mode of thought with which we have become addicted, but are envoys from an apparent world, just beyond our range of sight.