The Indri - on the brink of extinction? 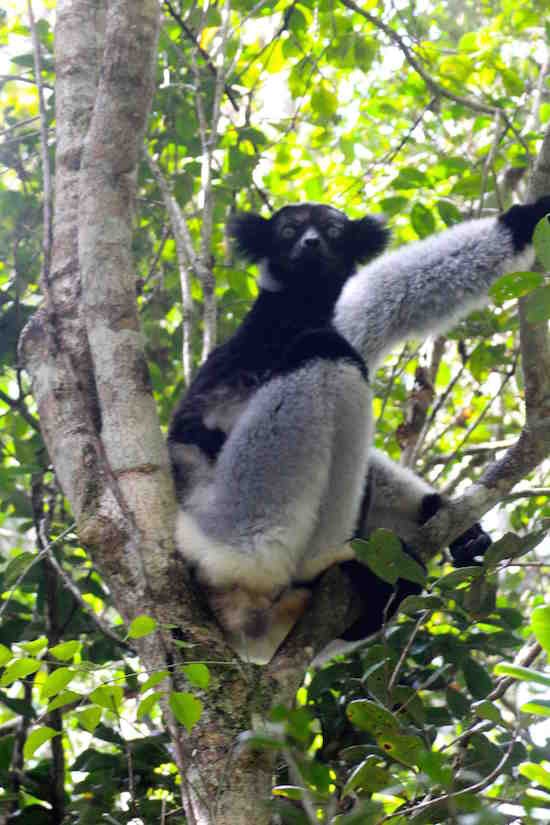 We hear the sound as soon as we step out of the car. A high-pitched wail, forlorn but also urgent, threads through the forest.

‘That’s what everyone comes here to see,’ he replies.

We listen again for the sound. It comes in intervals, after a silence that begins to sound ominous. It starts up again; at first faint, then crescendoing. The looping, high-pitched sound is unlike anything I’ve heard before, except one thing. ‘I remember now what it sounds like,’ I tell Mamy, finally. ‘Whales.’

The sound emanating from the deep forest is the call of the largest living lemur, the Indri. Endemic to Madagascar (as all lemurs are), the Indri is unique in several aspects. As well as its size, the Indri is has a highly specialised diet, eating the leaves of up to eighty species of tree, and cannot be kept in captivity. If you want to see Indri, you have to come to Madagascar. And most people come here, to the Mantadia-Perinet national forest reserve in Andasibe, a humid tropical forested area three hours’ drive northeast from the capital Antananarivo.

We set off on the smooth, moist paths of the reserve. Small wooden signs painted with a picture of the grey, black and white creatures with staring yellow eyes beckon. ‘Indri this way’, says another. It can’t be that easy to see them, I think.

After about twenty minutes’ walk we are told to keep our voices down. We encounter another group – not, interestingly, Jack Wolfksin-clad Europeans, but a group of Malagasy tourists eating sandwiches while pointing enthusiastically high up in the trees.

‘If we are quiet they will come down after awhile,’ Mamy tells us. We sit down on a log and wait.

The first thing I know of the Indri comes in the form of several small cylindrical objects falling on my head. ‘Oh dear,’ says Mamy. Being pelted with Indri poo is one of the occupational hazards of trying to see them. They are a large animal and live high in the trees, and gravity ensures a hard rain of these projectiles.

After awhile, as Mamy had said they would, they begin to descend into view. We see a white rump, what looks like an impossibly large creature with grey arms made of feathered boas, balanced in the fork of a tree.

‘Look,’ someone from the Malagasy group whispers, ‘she has a baby.’

Sure enough, through my binoculars I see a pair of eyes staring out from the mother’s midriff. The young Indri is chewing leaves placidly while clinging to his mother’s stomach. The small face is a copy of his mothers: black, with tufted ears and a permanently surprised expression. 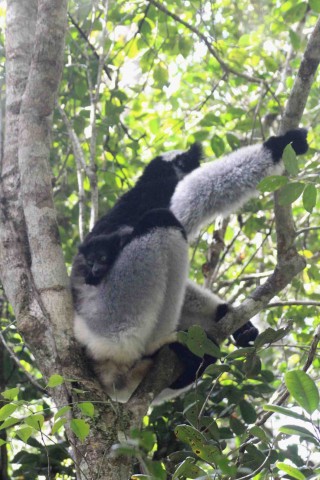 Indris are critically endangered. There are no reliable population figures, but estimates put their number as low as 1,000 individuals. They are in decline in part because their habitat – montane rainforest – has been steadily destroyed since the French colonised the island. Human encroachment for habitation and cultivation and logging have stepped up the rate of destruction.

The Indri are also vulnerable because of their size.  At nearly a metre tall and weighing between six to ten kilogrammes, the Indri needs a large and sophisticated food intake to satisfy its metabolic needs. While hunting or eating them is forbidden and is considered fady (taboo) by the Malagasy people, in practice they are sometimes hunted for meat. Being tame and slow-moving, they are also easy prey for their other predator, raptors.

Indri’s specialised diet and breeding cycle means that populations can reduce quickly with interference. The Indri are monogamous and will only seek another partner when theirs has died. They breed only once every two to three years – the length of time it takes to gestate and raise their young. Because they cannot be kept in captivity their survival as a species depends on keeping them alive in the wild.

On our logs we sit and watch, occasionally resting our necks when the strain from craning upwards becomes painful. From time to time the Indri stop chewing and direct their gaze down, regarding us with their staring eyes. We watch them clamber up and down the trees with a liquid ease, if their branches and trunks were made of air.

Madagascar has been the scene of several extinctions in the 2000 years since humans first came to the island. Nearly of these disappeared species have been megafauna – large animals. At least 17 species of lemur – all of them larger than existing lemurs – have become extinct since human colonisation of the island. Previously Madagascar had been isolated from Africa and the Indian subcontinent, its geological parents, for around 70 million years. Its isolation and the absence of animal competitors such as monkeys and large cats, as well as humans, lead to the evolution of unique and unusual species.

In the visitor’s centre at the Andasibe reserve we learn about Megaladapis, a giant Indri-like creature, the size of a man. Megaladapis was similar to a koala in body, but had a rhinoceros-like head with eyes on the sides of its skull. It became extinct somewhere between 1280 and 1420, likely from deforestation and habitat destruction. Other extinct species include the Elephant bird, the Giant fossa, which was about a quarter larger than the living fossa, and the Malagasy hippopotamus. Larger species are more prone to extinction because they are easy to kill, are often slow-moving and reliant on a particular diet, and vulnerable to viruses and other introduced pathogens.

Everywhere we travel in Madagascar we see evidence of historic destruction, as well as more recent deforestation: parched highlands where not a single bird sings, burnt-out lowlands where lone singed baobabs stand sentinel over fields which have been slashed and burned for cultivation. Most of Madagascar’s 22 million people live without electricity or running water, at least in the rural areas, and they use wood from trees as charcoal, to cook and heat their houses. They survive on subsistence agriculture. There is no alternative, for them, but to turn to their natural environment, even if so much of it is pre-ransacked by colonial extractive industries for teak, ebony, copper, cobalt.

The Indri stay feeding above us for some time. Then suddenly they are on the move. We find it hard to believe what we see next – the mother Indri and her baby were clinging to a tree near us, then they are gone. They have vanished, levitating horizontally to another tree. We watch as they repeat this manoeuvre, called ricochetal leaping. We see their powerful legs working like springs to launch them through the air. They float away from us silently, grey-white-black blurs, until they are out of sight.

We stand in the forest, the trees suddenly vacant, pondering this visitation. The presence of the Indri is calming, I decide.The Indri are sanguine lemurs who live in close-knit families. They hardly ever come into conflict, our guides tell us. The Malagasy word for Indri is Babakoto, which means, variously, ‘father of the forest’, and, ‘our father’. The Indri do look humanoid, with their long legs and sinuous arms, their size and nearly tail-less body. How did they get here? Where are they going?

Most creatures in eastern and southern Africa, where I spend several months each year, are under pressure from human habitation and predation. The Indri’s plight is a familiar story in that sense. But Madagascar is different: the conservation situation here feels more urgent, perhaps because Madagascar is an island, and, while huge, has finite boundaries. Around 90% of its original forest cover has been destroyed. Where will it stop? Recently resource extraction from Asia, particularly China, has taken off, aided by a government and political class committed mainly to self-enrichment.

Given the circumstances, the outlook for species like the Indri can’t be good. To speak of a species being on the brink of extinction is to suggest that there is no way back, and this is hopefully not yet the case for the Indri. I find it hard to imagine the forest without their ethereal, plaintive call.  Let’s hope the Indri beat the odds and survive to float from tree to tree like apparitions long into the future.