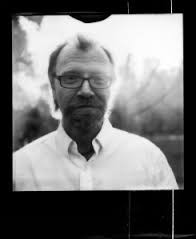 How to be funny, as writers - or funnier, at least? This was a surprise topic of discussion on a recent week-long residential fiction writing course I co-tutored at Ty Newydd, the National Writers' Centre of Wales.

Ty Newydd, located in a small village near Criccieth, is a place of serious beauty. Cardigan Bay is denim blue, and the north coast sun falls in swords as blonde-pated mountains lean precipitously into the sea. The stately, ghost-less house was British Prime Minister Lloyd George’s final home; his grave is located in a shadowy arbour just down the lane. The house has been lovingly restored as a residential centre for writing. Its centerpiece is the library, where a semi-rotunda creates fascinating acoustics and a plangent view out to sea. This surrounding landscape would be a more obvious inspiration for the lush, avid poetry of Dylan Thomas than savage satire of the shibboleths of post-capitalism, say.

Comedy was not an initial focus of our course - my co-tutor, Julia Bell, and I conceived it as a short-story course. But as it turned out our diverse students had a common goal. ‘I’m sick of writing these funereal stories,' said one. ‘They're all about death and disappointment.’ (We helpfully pointed out these were all-time favourite subjects for the short story.)

Julia: ‘Name me a great writer who isn’t funny.’

I had always thought it a tragedy myself. Could a writer who once described literature as ‘a hatchet with which we chop at the frozen seas inside ourselves’ ever be described as capable of lightheartedness? But after some analysis we decided that the bleak absurdism of the book was a vein of subversive humour. And try as we might, we couldn’t light on any authors we admired who had never been funny. Even writers generally acknowledged as gloomy could, we conceded, write a wry line or two.

We had all been remiss, we acknowledged, in not being funny enough in our work. How to correct this oversight? We had all heard the dictum that most situations can be viewed simultaneously as a comedy and a tragedy, but we weren’t sure that being funny is something you can turn off and on, a kind of synaptic tap.

But is comedy a technique, a sensibility, or, as I suggested to our Ty Newydd students, a conscious decision to view experience with a particular lens? To be truly funny as a writer – as in laugh out loud funny – requires a deftness of spirit as much as of technique. We discussed writers we considered funny. George Saunders, for example, the American writer whose work is satirical, bleak, slapstick, sentimental and tragic at once. Or the Irish writer Kevin Barry, whose bleak, acidic characters perfectly express a gallows vein in Irish humour. ‘It seems important that the comedy emerges from the characters,’ Julia reflected. ‘If it’s something which the author is foisting on the situation through self-consciously ‘comic’ writing - the tone will be wrong - often forced and or frenetic.’ We reflected on the many capacities of humour: to entertain, subvert, challenge, demystify, disempower, shock, release. But comedy can be pedestrian too, resting on its laurels only to reify cherished beliefs.

I was reminded of this the following weekend, when I found myself back in Wales again (technically on the border) for the How the Light Gets In philosophy festival in Hay-on-Wye. A panel called 'The Laughing Philosopher' considered whether comedy is a form of philosophy, and specifically its capacity to challenge the status quo and powers of authority and public morality.

Much of comedy simply reinforced already entrenched ideas, said comedian Katy Brand, a panel member. There was a self-satisfaction in recognising stereotypes and merely confirming them. Entertainment can be reassurance; we seek safety in mutually acknowledged tropes. The panel also discussed how humour changed over time – Nabokov’s Lolita, for example, was once banned as pornographic whereas now it is considered one of the great postmodernist comic novels.

That comedy can be conformist as well as rebellious rings true, but in literature it is stakes its claim overwhelmingly with the latter camp. In this sense, comedy is a serious enterprise in literature – witness the contributions by major writers such as Calvino, Borges, Foster Wallace, Bolaño as well as the Folio Prize-winning Saunders, to name a few (for a recent example of Saunders’ satire, which flirts with making jokes about sexual assault, see his faux confession about being Ayn Rand’s lover in The New Yorker). Comedy is not always social critique, but when it does turn its explosive, wayward power to the mores and sacred cows, to morality embedded in the institutions at the heart of society, it resurrects itself as something more than mere fun to become transcendent, visionary, potentially emancipatory.

Satire is widely considered the hardest register to write in. For Saunders, satire and compassion are closely related. ‘Satire, for me, is a way of encouraging clear sight,’ he has said. With satire, it may be necessary to not know you are writing it. When his novella and collection of short stories Civilwarland in Bad Decline was published, Saunders was congratulated for his satire of late 20th century fin-de-siecle capitalism, but, he has said in interview, it hadn’t occurred to him that this was what he was doing.

Like Kafka, Saunders’ work is often comic and tragic at once. Its radicalism comes from the percussive venting of unacknowledged tension that humour often produces, and from its willingness to sacrifice sacred cultural symbols for fun. Reading his stories sometimes feels like being punched, then shamed; the shame is complex: for having laughed at something so unfunny (handicapped people, the horrors of the Second World War), and twinned with it, a childish surprise that such verboten topics can still be funny. In the emotional backwash of laughter and delight, an uneasy energy brews reflection. The motto of satirists is: ‘First make them laugh. Then make them think.’

Saunders did not find his voice immediately. In an interview with The Missouri Review, Saunders revealed his struggle to distinguish himself in a naturalistic vein of writing. He describes his dilemma when studying for the creative writing course at Syracuse University (the course he now teaches on): ‘I thought I’d be a “real” writer and write nice, realistic stuff. But what I eventually found out was that in realist mode the life went out of my writing. I had about three or four years of this, where nothing was really working for me.' He was, he says, stuck in the ‘Funny versus Earnest polarity’. He revered Twain, Gogol, Kafka, but only when he reencountered what he described as a base survival instinct and started to write about his experiences as a low-paid worker – Saunders had worked since he was fifteen – did he discover the twin reservoirs of his fictional territory and his trademark sarcastic yet sentimental voice.

After supper on the final night of our course comedy emerged, along with a slim bottle of Welsh whisky. One of our students read a faux-dystopia story about a group of home counties heroines after the takeover of the British Isles by muslim fundamentalists. The women insist on holding tea parties which they attend in Laura Ashley burqas and discuss how to defy the imams while their husbands trade off the time they no longer have to spend shaving with obligatory classes on Sharia law. Like much comedy, it teetered on the brink of absurdity and outré-ness, but, buoyed by the wry voice of its protagonist and inventive prose, it righted itself. Another student surprised us that final night with a playscript about an alien invasion of South Wales. He announced that we would mount the production that very night, in a staged reading (I played the alien). The invasion was accomplished by way of a UFO cunningly disguised as a giant teapot. We laughed so hard our faces hurt.

To make our writing more comic requires a conscious decision to look at all we experience and observe with a lens attuned to absurdity, exaggeration, burlesque, scatology, cynicism and the other tools of humour: in other words, a commitment to finding the humour in any situation, we concluded. There are many veins and registers of humour, but you won’t find the one that sits most naturally with your expression if you are not looking.

I await the next story from our students – a comedic reflection of a GCHQ worker, perhaps, as she trawls through our emails of forlorn love or professional frustration for nuggets of surveillance gold. Or a story about a teacher in a so-called Trojan Horse school, desperately trying to radicalize his secondary school students, while plagued by guerilla visits from Ofstead inspectors. Nothing is sacred, comedy insists, while it laughs in the face of authority and its dark commode of threats. Like any other mode, humour can be conservative, complacent or radical. It may well depend on how much is at stake.