The Edge of Extinction - a Sokoke Scops-Owl safari 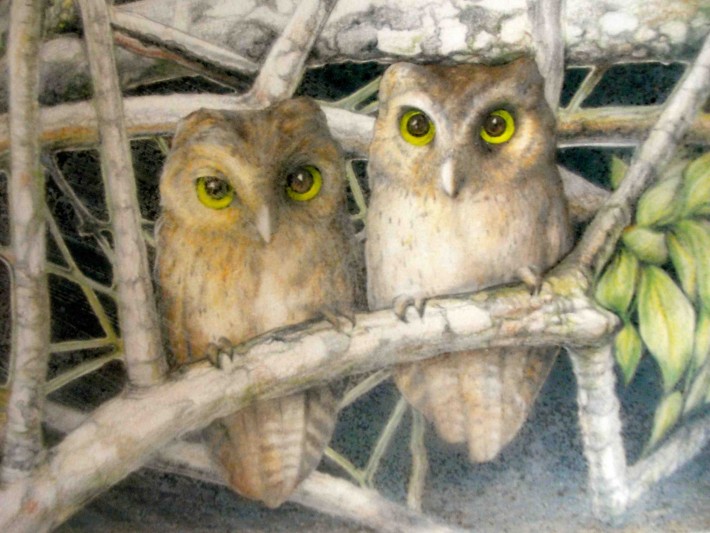 We walk single file in silence, threading our way through the wispy trees that line the perimeter of the forest, David, our guide, leading the way. He comes to a sudden halt in a small clearing and looks at us expectantly.

‘Can you find them?’

We scan the upper branches of the gnarled trees around us. Creeper vines weave tent-like canopies above our heads. We peer into the thicket, but nothing peers back.

After a minute or two, a pair of yellow eyes open and stare at me, intently. Then a pair of identical eyes flip open and I find myself staring at a double-headed creature, an owlish Siamese twin.

‘There you are.’ I grin. David grins back. He’d seen them the moment we arrived.

The animals sitting on the branches in their huddled pair are Sokoke Scops-owls, one of the most endangered species of owl in the world. This pint-sized owl stands about six inches in height and weighs only sixty grams. It lives in two small parcels of forest on Kenya’s Indian ocean coast, and a further postage stamp sized forest in northern Tanzania. There are several species of Scops-owls in Africa, grouped because of the distinctive tufts on their ears. Worldwide about 45 species of Scops-owls are found throughout Europe, Africa and Indonesia.

Sokoke Scops-Owls are special for their miniature size and the specificity of their habitat. All Scops owls prefer old-wood or primary forest, whose trees are full of holes for nesting. These Sokoke owls cling to the habitat of their favoured roosting tree species, Cynometra, and the red-soil areas of the Arabuko-Sokoke forest, a protected area under continuous threat from poaching, illegal wood-cutting and incursion. Only some 1000 pairs remain in the wild.

David Ngala, our guide, has been studying these tiny owls since 1983 and is the most experienced birding guide in the Arabuko-Sokoke forest, located about thirty minutes’ drive south of Malindi. David is now in his late sixties, but that doesn’t deter him from performing feats of endurance to observe these elusive creatures.

‘How did you find them?’ we ask. Even just a few minutes’ searching suggests a needle in a haystack scenario. We walked right by the owls on our first sortie, even though David had told us to be alert.

‘I camped here last night.’ He tells us how he had stayed on his own in an area far from any village in a tent the night before so that he could find the owls. ‘It’s the only way,’ he explains.

At night he listens to the owls in order to locate them. The male and female spend all day huddled together, away from the sun and rain, but at night they hunt separately. The male calls to the female at intervals. His tuba-like hoot, surprisingly loud for such a small creature, weaves through the forest.  The owls are very territorial and call to defend their patch, but they also call to reassure each other.

The Arabuko-Sokoke is a remnant of a once-extensive lowland dry forest that once stretched the coast of East Africa from Somalia to Mozambique. Pressures of human population, unrest, pineapple and sisal plantations and illegal profiteering from protected forest lands pose considerable challenges to the forest’s survival, and the many endemic and near-endemic species of bird, mammals, butterflies and plants that live within it.

Birds are particularly plentiful in the forest. While sitting on the forest floor gazing at the owls we heard or saw an array of species, some rare or found only in the area: Zanzibar sombre greenbul, Eastern nicator, Four-coloured bush-shrike, Peters’ twinspot – and a curious Red-capped robin-chat, who sat in on our owl sighting, hopping up and down in front of us like an impatient messenger.

But this elusive owl harbours a secret. Not even David, their most experienced observer, knows the answer.

‘Their nest has never been discovered. They’ve never been seen mating, and a chick has never been observed being born. Although we are sure they nest in holes in trees we have never seen how and when and where they reproduce,’ he says.

There are four pairs of Scops-owls in the immediate vicinity. The Sokoke Scops-owl comes in different hues, known as morphs: rufous, or brown-orange, bright orange, and grey versions. Similarly flavoured animals tend to stick together. In the morning we visit the forest with David we find a rufous coloured pair and a grey pair huddling together on a branch, not far from each other.

But none of these four pairs have produced chicks in years. We ask David why he thinks they are failing to reproduce.

‘They are disturbed by poachers, that is what we think.’ Poaching of game and illegal wood harvesting for wood carving and firewood are the two most serious threats to the forest.

Our Scops-owl safari is an attempt to not only see these shy creatures, but to get to grips with the multiple threats to the forest. On the way home we stop to buy mahindi, charcoal roasted corn on the cob, from a young woman sitting on the roadside, a baby slung in her khanga. She is tending her maize plot or shamba, which must not be left unattended lest baboons eat the entire crop. Corn is a staple, and these subsistence farming peoples' diet is unvaried; it might be enlivened only by a little fruit. The forest adjacent to their shamba is a source of free protein. The tiny Suni, the smallest African antelope, and the Ader’s duiker, another endangered species local to the forest, are also under threat due to poaching by poor people desperate for meat.

Butterfly harvesting is another source of income for the people who live on the forest perimeter. We pass several traps, netted helixes with a dish of sugarwater in the bottom. Butterflies and pupae are harvested and sold to middlemen who export them abroad to zoos, tropical gardens and for research.

We leave David at a forest station outpost and carry on back to town feeling chastened by the owls’ dilemma. That such dignified and unique small creatures are seemingly unable to reproduce is a sad outcome. What can their future be? Despite many education and conservation initiatives in the forest and the surrounding towns, the destruction of Arabuko-Sokoke continues unchecked.

The owls have a compelling presence, we agree. We stayed with each pair of owls for about fifteen minutes. The owls slowly adjusted to the spectacle of three people bristling binoculars and cameras sitting on the forest floor. They ceased staring, ruffled their feathers, and huddled closer. They did not like to be even an inch apart. Soon their yellow eyes closed, they rested their heads on each other’s shoulder, and fell asleep.

They are there now, only twenty kilometres from where I write on the Indian ocean, sleeping on a branch, the repositories of secrets, seemingly nestless, doomed, very possibly, to an early extinction. At dusk the male and female will wake in their huddled Siamese twin pair and separate to hunt the beetles who frequent the woodland, calling to each other all though the night.