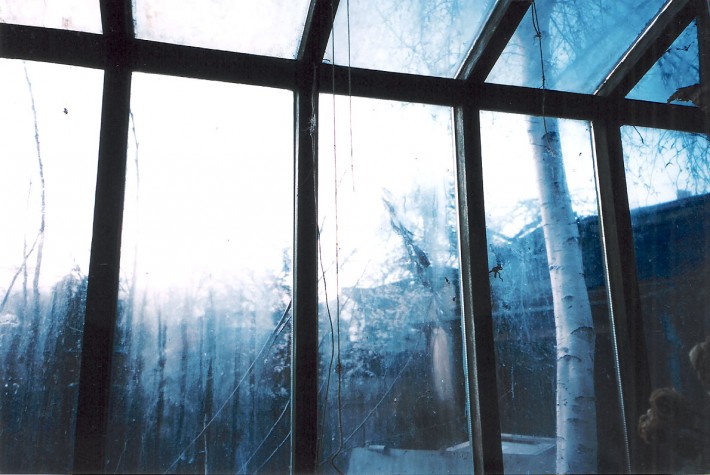 ‘Winter Garden’ is the title of an exhibition curated by Lucy Reynolds for Flat Time House, a South London gallery, and for which I’ve been commissioned to write and read a story. On January 31st, tomorrow night, the gallery will host a series of readings, films and performances dedicated to winter.

Flat Time House was the home of John Latham, an important post-war British artist. Latham was interested in concepts of time; he was also obsessed by books, which often featured in his work, in the form of replicas, casts, or renditions of the actual object. A visionary conceptual artist, Latham believed that the most basic aspect of reality governing space-time was not, as physics posits, the particle, but that time was governed by an ‘event structure’. He termed the base component of this event structure ‘least event’, or the shortest departure from a state of nothing.

Winter Garden has been curated in response to Latham’s own garden, in the rear of the exhibition in Latham’s former studio space on Bellenden Road in Peckham Rye.  Here Latham carved out a small garden from what was once a driveway to a stable block. He grew strawberries on the roof and watered ferns and flowers inside his studio conservatory.

We participating artists were asked to consider the two concepts separately and together: Winter/garden. The conundrum is immediately apparent – gardens are most often enjoyed in spring and summer. In winter they fall into dormancy; then, they can be a melancholy space.

The exhibition presented a challenge to me, in part because I no longer spend entire winters in Britain. Less than a week before the reading I returned from six weeks in Africa, catapulting myself back from 35 degrees and the scalding southern hemisphere summer to deepest winter in England. I am lucky to have these winterless years. Yet something is lost, too, in not sustaining an engagement with the season. Winter can be a bitter doldrums, yes, a reckoning, but its fallowness also promises the hope of renewal.

In thinking of the story I would write, I was reminded of a poem by Sappho translated by the Canadian poet and classicist Anne Carson, ‘If Not, Winter’. Sappho’s poems only exist in terse fragments, not unlike some of the diaries of polar explorers, found long after their deaths, with lines of ink erased mid-sentence by water. In her poems lone words in a broken language stand stark:

I yearn and seek after

The twinning of hot and cold, of fire and ice, to try to explain the trauma that love enacts on the heart – the use of the incendiary and the frigid is at least as old as the Greeks. Cold burns, as much as freezes. Look at any picture of frostbitten fingers and you will see they are charred black, bloated like sausages, as if they have been held to a flame. The processes of cold enact the same violence on the body as those of heat.

Re-reading this poem I stare at the word, as if I have never seen it before: winter. It’s there in the word itself, the hollow ring of absence. Days passed unnoticed by anyone you love. Days without spirit or hunger.

Winter is an exploration of an inner as much as an outer landscape. It is also, in essence, a kind of ambush. How much deprivation can you take? It asks, without really asking, of course. Most of us have no choice but to endure it. Now that I live part-time in a winterless band of the planet, winter seems to me a necessary season, a fallow lying-in, of regeneration and renewal of trust. Winter people are resolute and resourceful. We need these qualities to get us through lean times.

The story I wrote for Winter Garden, ‘Temps Mort’, had to conform to another concept suggested to us by Lucy, of a ‘cold spell’. Spells are periods of time, but also enchantments. It is an apt brief; the story seeks to hold the reader spellbound, for a short(er) period of time, compared with the novel. The enchantment must be deeper, more intense. ‘It would be great if you could write a ghost story, of sorts,’ Lucy told me.  Winter is also the time when the veil dividing the living from the dead is at its thinnest. We feel the presence of our own eventual transfiguration in the yearly seasonal death. The long nights plunge us into contemplation.

My piece is a ghost story, as it turns out, although its main inspiration is light – in particular the light of cinema, and cinematic terms used to describe light, such as Le Chienloup, Nuit Américaine and another cinematic term, which gives the story its title, Temps Mort, or ‘dead time’, which refers to when a director films interludes or longueurs between action or dialogue in which no major narrative development takes place. The purpose is to build character and atmosphere, rather than to advance story. In European cinema at least, it is also sometimes used to refer to a technique wherein the director leaves the camera rolling after the actors have finished acting, thinking the camera is no longer on.

I’m a Temps Mort writer, particularly stories. In short stories particularly, the ‘real’ story happens not in the scenes of confrontation or action (such as those I will read tomorrow night in an abridged version); the real story takes place in innocuous moments, asides, descriptions, times when the characters forget they are supposed to be in a story, forget they are supposed to talk, and do meaningful things.

Death is like Temps Mort, too, I can’t help thinking – in sudden death situations especially the dead are often so surprised to have been hauled out of life, they carry on acting, in a different realm. It is these people who come to haunt one of the main characters in my story.

The other inspiration for my Winter Garden idea is the Antarctic, where I spent the best part of a summer and the beginning of winter. Summer in the Antarctic means a three-month long day, and I also wanted to write about what it is like to live without night, what a reencounter with it feels like, after it has become unfamiliar.

Light – along with the tilt of the planet – is what accounts for the seasons, of course. As much as cold, light is the substance of winter, and of summer too. As I write I am bathed in the milky apricot sunlight of the northern hemisphere winter, so weak and uncertain compared to where I have just come from, where the sun stung my arms and we had to jump into the cold Atlantic to cool. It’s strange to be so suddenly back in winter; it is like being plunged into a parallel dimension. Immediately I start to think about contingencies, nevers, that dark swift current that moves undeneath our conscious life and which belongs not to us, but to another, nameless, entity. It's difficult to conscience this amalgam of uncertainty, dread and sublimination where I have just come from, where people run for miles along the ocean and drink lurid cocktails.

We all have to create an interior garden, I think, to live with this season and its deprivations. It is this space and John Latham’s legacy we will celebrate – by candlelight and with warming food – tomorrow night.