Wilderness and the Future City 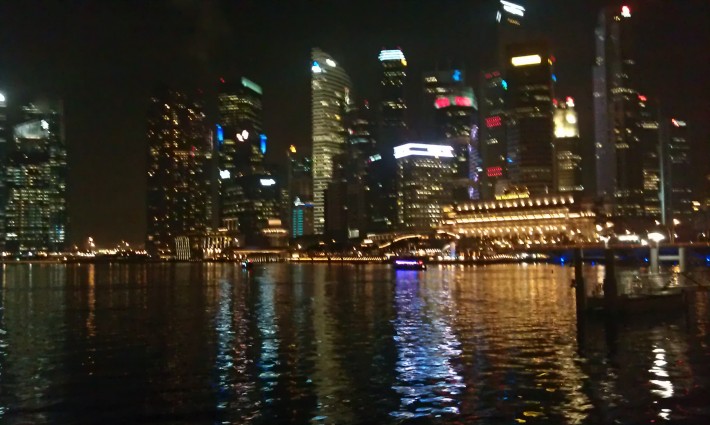 From the land of lions to the Lion City (all will be illuminated)… wilderness and the future were the perhaps unsurprising themes in a recent working trip to Singapore. Julia Bell of Birkbeck College’s MA in Creative Writing and I recently taught there for a week, under the auspices of the Writing the City programme, a platform for Singaporean writing, particularly new and emerging authors, funded and run by the British Council and Singapore’s National Arts Council.

Singapore is one of the world’s five sovereign, independent city-states. At just only 700 square kilometres, it is also one of the world’s smallest countries. But in the last thirty years it has cannily transformed itself into a regional hub for finance, travel and increasingly for culture and the arts, fuelled by an economic boom rivalled only by China.

Things I noticed about Singapore, in no particular order:

3.     Draconian laws and a punitive justice system are not necessarily enforced/do not perceptibly  create a climate of fear

4.     Youth, when they want to rebel, skateboard in underground malls

6.     There are definitely not enough shopping centres and hotels. More must be built immediately.

Teaching creative writing in a country which has repressed freedom of expression and brooked almost no public debate is a contradiction in terms, and this is in part why I wanted to do it. I had a distinct sense in Singapore that it is aware that restrictions on freedom of expression in a modernising, cosmopolitan state are increasingly an anachronism in a largely liberalising world.

This is not to suggest naively that democracy and free markets go hand in hand. Anyone who has a passing knowledge of the rise of the Asian tiger economies knows that authoritarian governments and exponential capitalistic growth suit each other's purpose; in fact social control in the model of South Korea – or indeed China – combined with a lack of control on capital flows and zero oversight or taxation of financial transactions spell perfect weather for international capitalism.

It was strange to come from an African city and suddenly be in such an overtly wealthy metropolis. Where were the workers of one race carted about in the backs of pickup trucks by a driver of another race? Where were the street beggars and the self-declared parking martials? I had landed in a simulation – a kind of Chicago School economists’ video game called Grand Theft Everyone. Or a tropical Toronto. But I had to quell the inner angry anti-capitalist with a series of Singapore Slings and get on with the serious business of teaching fiction writing.

Our students were writing about the usual things – family, love, the quest to give value and meaning to life, ambition and delusion, history and language and the legacy of being who you are and where you are from. But there was an odd frisson, for me, to be in a classroom and be discussing state or politically-controlled censorship of creative work. (The more elusive censorship practiced by the ‘market’ and mass taste is a different creature.) I realised that I hadn’t talked about this seriously since I worked in Cuba, and that in a post-Communist world it had hardly ever arisen. Not that students were writing fiction critical of the government, and ultimately these concerns did not seem to hinder anyone’s free expression in their work. Rather it was seen as an issue that might have to be dealt with in the future, if they wanted to publish.

Censorship and fiction are pitted against each other. Fiction is one way to supercede restrictions on expression, by bamboozling censors into thinking that because it’s a lie, it is not true. (Fiction writers know that on the contrary, sometimes to tell the truth you must lie.) Censorship is often correlated with a challenge to political or personal power, and the measuring of one’s individual – usually far lesser – power in relation. But the most insidious form of censorship in creative work is self-censorship. This takes many forms and is not usually about state-sponsored repression: what will my family think of me if they read this? What will my colleagues think? Who will be hurt by what I write? Rarely, this day in age, does it extend to: will I lose my livelihood if my views are aired in print, or on the internet?

Being in even a mildly repressive state always resuscitates the ex-rebel. In my hotel room at night I found myself trawling Amnesty International’s campaign database on Singapore and provoking the cyberspies by Googling ‘miscarriages of Justice, Singapore’. Worse, I was overtaken by a weird compulsion to steer every conversation inexorably toward politics. (I should never set foot in Iran.)

But I also feel committed to promoting, in whatever small way, literature and cultural development in this island city state, for several reasons: it needs it, and has acknowledged this; there are many talented writers there who can help build a more complex and enduring sense of nationhood; the historical moment is right for a more allowing national identity; and Singapore is so bizarre, geographically and geopolitically, that it deserves a chance. And I am thankful for the opportunity to engage in its future.

When we were not teaching, having meetings or giving talks at University, we hit the zoo and the bird park. Singapore sits at the bottom of the Malaysian peninsula. It is the junction of Asia. A riverine mesh of sluggish waterways, its 63 islands harbour diverse tree and bird life. At the Jurong Bird Park we saw the Bali Mynah (see below - it hovers on the edge of extinction, with only 50 left in the wild), the Crested Pigeon – so much more beautiful than your average Trafalgar Square ex-reptile – and the Rhinoceros hornbill, which has to be seen to be believed. 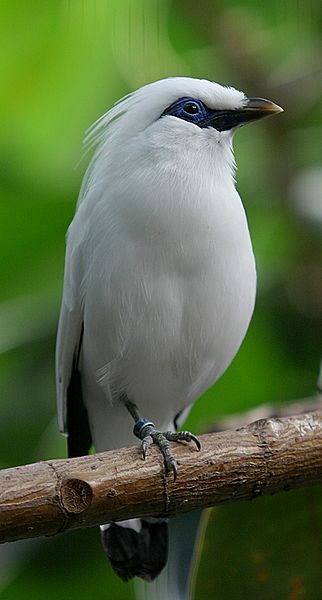 Even though its name means ‘Lion City’ in Sanskrit, what I most missed in Singapore was the sense of the wild, of a frontier, a hinterland – somewhere else to go, in a nutshell. Here in Africa, even in this hook city at its bottommost outpost, there is always a vast wilderness just beyond the periphery of the conurbation. Behind my apartment building baboons hoot through the night and the Cape cobra scales the mountain. In Africa even the cities are wild.

In Singapore there was no wilderness apart from managed spaces – the zoo, the bird park – and everywhere else was given to money-mammon plinths, Blade Runner buildings with ships suspended on the 60th floor, and immaculately restored Colonial buildings painted in putty colours. The city, we agreed, looked like a cross between the Jetsons and a giant architect’s drawing, with its regimented not-yet-planted-trees and its contented future pedestrians drifting down avenues clutching café lattes. It was hyper-real, it was the future, and yet it was not real.

Back here in dormant Cape Town (its nickname in Afrikaans is ‘sleep-ville’) I wonder if I glimpsed the future there. And if so, what version of the future? The international transit lounge for capital flows kind? A republic of the contently ambitious? A sanitised pan-Asian megacity, perhaps, fully owning the future in the shadow of its slim but traumatic past.