We are all Walter Benjamin Now 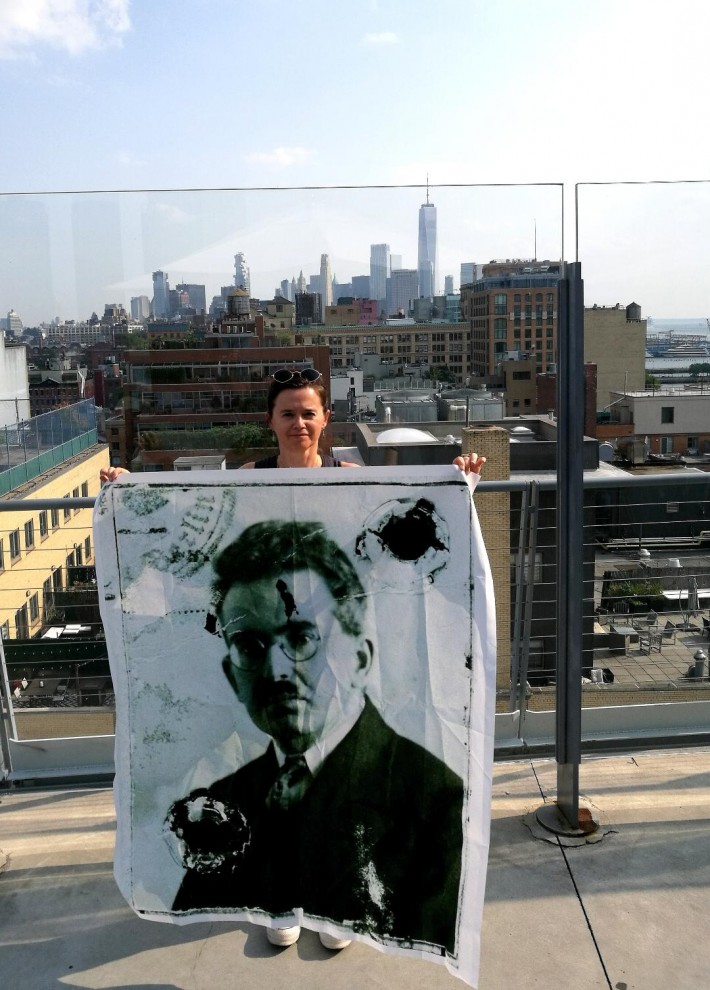 Early in the morning of September 25th, 1940 a small group made their way along a trail in south-eastern France, threading through lush vinyards of the Côtes du Rousillon. Among them was Walter Benjamin, the writer and critic. This would be his last journey. When the group of refugees – émigrés, in the parlance of the day – finally arrived in the small Spanish border town of Portbou, they were informed they would be deported back to France. Exhausted and in despair from years in exile, Walter Benjamin committed suicide.

Seventy-eight years later, Benjamin’s failed flight from the Nazis and tragic death is now the stuff of legend, commemorated in a compelling memorial in Portbou, a biopic starring Colin Firth, as well as the subject of many PhDs, radio programmes, and now an art exhibition. It fits the popular imaginary of Second World War lore. But it is also our story, 21st century version.

In July 2017 photographer Diego Ferrari and I walked the trail Benjamin had taken that fateful morning. We made a film about the crossing, which was unexpectedly gruelling – we knew the path was difficult and steep in places, but walking it ourselves brought home to us how difficult it must have been for exhausted, frightened people who did not have the benefit of six litres of water and North Face walking shoes. The film would be part of our unfolding body of artwork based on an oblique approach to Benjamin’s life – via the wild places he loved, particularly Mediterranean islands, and the charismatic, volcanic landscape of his death: an unusual angle, perhaps, and also personal. We have spent several summers in the nearby resort town of Port de la Selva and knew the area well.

Benjamin was not a political philosopher: that was his friend and Frankfurt school associate Hannah Arendt. Nor was he a particularly impressive figure in person. Lisa Fittko, the woman who guided him over the Pyrenees, later wrote: ‘He was always unlucky… He was clumsy, he would arrive at someone’s house at the worst possible moment. He had no idea of how to live in the real world.’ But this fumbling, otherworldly character’s novel amalgam of observation, travelogue, history, anecdote and philosophising made him the progenitor of ‘creative-critical writing’ – the category du jour in university creative writing departments and which is making a renewed claim on our literary landscape via work by Ben Lerner, Olivia Laing, Rachel Cusk and Amit Chaudhuri, among others.

What Ferrari and I did not foresee was how much our artwork would turn out to be about borders. All the texts in the book we are publishing alongside the exhibition – whose contributors include British fiction writers, an Iranian poet as well as scholars Esther Leslie and Lyndsey Stonebridge – confront the renewed power that state citizenship regimes and policed borders brandish over our lives. It’s easy to forget that the weapon of choice during the Second World war was often paper. Benjamin, Arendt and others spent the first stage of the war in a frantic search for ‘papers’: visas and the laissez-passers that might, dependent on the whim of the official, convey them across borders.

This was the defining question of Walter Benjamin’s era: who can call themselves a citizen, and what rights does this confer? Its answer on one quixotic, spectacular autumn morning in Portbou – that the stateless are also rightless – killed him.

Much as Benjamin’s work is an elusive, metaphorical meditation on the Realpolitik of his era, our artwork became an abstract rumination on borders – physical and metaphysical – and their capacity to restrict and rewrite our existences. Ferrari’s photographs of West African economic migrants who now live in the border towns near where Benjamin died are not documentary depictions of people plucked from the shallows of Greek islands. Rather they refer to the dank emotional undertow of the upheaval we are now living through now, and which is bearing all of us in different ways toward an unfolding, perhaps permanent, exile.

As Benjamin saw it, history was the annihilator of subjective individual experience. Eventually, it might remember you, but to do so it must first forget: ‘Even the dead will not be safe if the enemy wins,’ he wrote. That thought was on my mind as I carried his image taped to a placard up and down the Pyrenees for ten hours straight on a hot July day.  It was a kind of resurrection. As Esther Leslie writes, Benjamin’s work on the centrality of the image to our experience has proved to be oracular for the digital age. You can apply much of his ‘The Work of Art in the Age of Mechanical Reproduction’ to Instagram. ‘He keeps moving through the landscape,’ Leslie writes. ‘His perspective keeps changing. He is caught from many angles, like a landmark. He persists.’

Day for Night: Landscapes of Walter Benjamin by Diego Ferrari and Jean McNeil is at the Peltz Gallery, Birkbeck College, 43 Gordon Square, London WC1H 0PD from 21 September until 27 October 2018.