Walking the Secret Hills of Laikipia 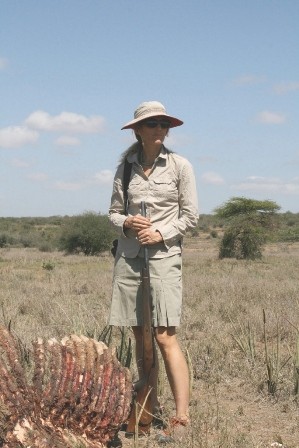 In the promotional trailer for BBC’s current showcase natural history series, Africa, Sir David Attenborough plants himself human compass-like at the top of a hill. In all directions are sweeping, majestic views, empty of human civilisation. ‘Here the equator runs across the continent,’ he declares, flinging his arms out from east to west.

Such people-less views are becoming harder to find in Africa, especially East Africa. Sir David is standing atop a hill in Laikipia, a vast area four hours north of Nairobi, in north-central Kenya. I recently qualified as a professional safari guide in the nearby Lewa Downs Wildlife Conservancy, and recognised the landscape in the Africa series trailer shot. Sir David's location team are doing their job well - the hill on which the helicopter and its spiralling camera captures him happens to be known to only one safari company in Africa, Karisia. I was fortunate enough to do a week’s work experience with them recently, to learn more about the reality of conducting walking safaris in this wild and remote area of Kenya.

Karisia is one of Africa’s premier walking safari companies. Their safaris are supported by a team of knowledgeable local people, as well as a dozen companionable camels who are used mostly to transport tents, coolers full of food and drink, and other supplies. I wanted to experience the reality of leading walking safaris, a demanding and potentially dangerous endeavour. Kerry Glen and James Christian, proprietors of Karisia, kindly let me tag along as a trainee on two separate trips. One was one of Karisia's Samburu-led safari, where the head guide and staff were Samburu and Laikipia Maasai (pictured below). Our trip was lead by the charismatic Boniface, and a legendary tracker of endless patience, Shillingi. 'See this? Dikdik!' Shillingi would say to me, in his efforts to improve my competent but not telepathic tracking skills. 'No!' was the only answer, as he pointed to a near-invisible smudge on the ground. 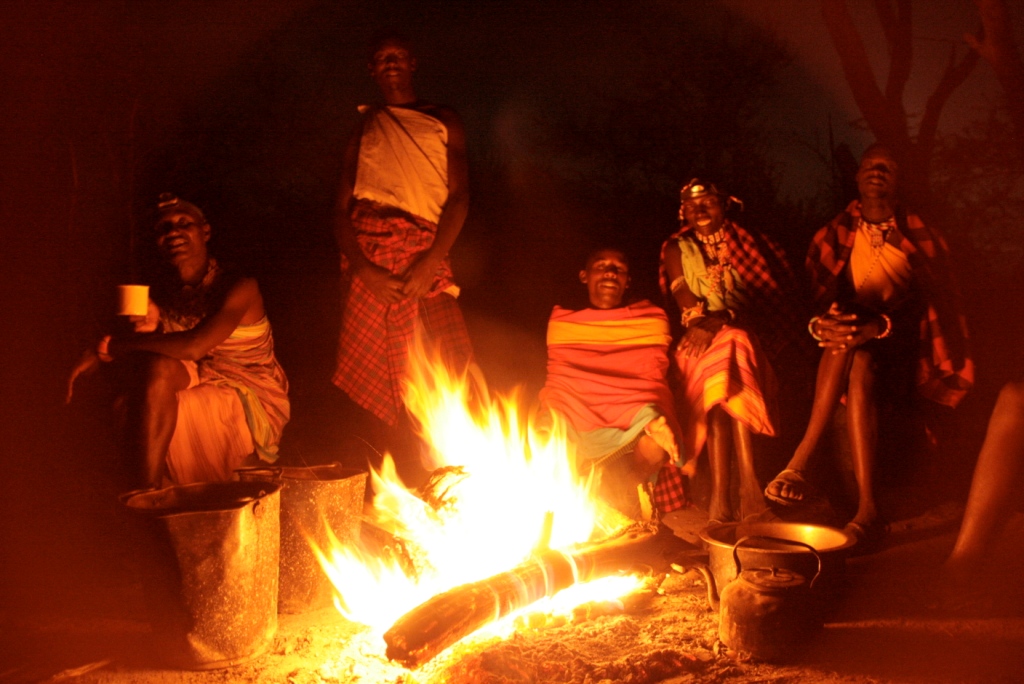 The second trip was lead by Kerry herself. Kerry (pictured, top) is a second generation Kenyan. A lifetime of living and working in the bush in Kenya and southern Africa have given her a detailed and intimate understanding of not only the flora and fauna, but the history, politics and conservation efforts in her region.

Early one morning Kerry and I drove out to a remote airstrip in her Landcruiser to collect the guests, who were flying in from Meru on a charter flight. We would begin walking almost immediately, leaving the car and picking up the camels near one of the kopjes.

‘About 100 kilometres north of here, Kenya stops,’ Kerry told me as we waited on a still, near-silent morning, if not for the amazingly loud little white-browed sparrow weavers in the trees. The country's actual borders - with Ethiopia and Somalia - are still hundreds of kilometres away, but just north of Karisia is a vast and arid area of northern Kenya where there is little state control or infrastructure.  Not far from where we were parked, Somali-backed cattle rustlers armed with AK-47s pose a threat to local herders, although not generally to tourists. Rhino and elephant poaching are also on the rise in neighbouring Conservancies, fuelled by demand from Asia for ivory trinkets and ‘medicinal’ uses of rhino horn, although thankfully that has not been a problem on Karisia’s land.

A distant buzz turned into a roar as the TropicAir plane flew in low over our heads. Our guests tumbled out of the Cessna, as excited as we were about the coming three days, when we would walk 12-15 kilometres a day in the bush and climb some of those secret hills.

There are two differences between a walking and a vehicle-based safari. When you are on foot in the bush, you are part of the food chain.  Most wild animals struggle to conceive of vehicles, or any other containers (elephant are an exception – they will flip cars, even heavy Landcruisers, out of pique, seemingly fully aware there are people inside). If you are charged by a lion and you leap into a car or into a tent, it is as if you have vanished. If you are charged by a lion while on foot and there’s no car or tent to disappear into, it’s a different story.

The ultimate payoff comes from being on the same level and footing as the animals, moving through the landscape with their persepective. We can see clearly their tracks, we follow the game trails they have forged over generations, see their scat and dung, smell acacia mellifera blossom or the ripe scent of carrion. Training as a guide means learning to read the land like a text- which characters have been here, what happened between them, and how long ago -,  and this is a story best enjoyed on foot.

There is no such thing as a dull walking safari. Hours in a game drive vehicle can become monotonous, but walking never is.  One evening we came upon fresh dung of a buffalo. When we see this lone cow-pat splat we know this means a solitary, usually old and cantankerous, buffalo was nearby, and possibly had likely settled himself into a nice acacia tree for the evening and will not take kindly being disturbed. Cape buffalo are responsible for the majority of injuries and deaths to tourists and local people in the African bush. Old bachelor bulls are especially bad tempered and will charge with no provocation or warning.

Only that morning we’d been similarly close to a leopard. The tracks were fresh, as was the scat – black and wet with blood – and we picked up the smell of recent death, including undigested grass from the intestine of the leopard’s quarry, a Grant's or Thomson’s gazelle. We didn’t see the leopard, but it is likely she was watching us, occulted within a nearby bush.

The day before we had two strange encounters. The first was with a carcass of an adult male giraffe. It was only half eaten, with half the neck, head and ossicones (horns) left intact. Not far away we found its front lower leg, completely intact. It was a strange, almost uncanny sight, this giant of an animal on the ground, half-destroyed.

The mystery was its death. Very few things will kill an adult male giraffe. A lone lion can’t manage it – it takes a pride, or at least several lions working in coalition, to bring an animal of this size down. Old age and infirmity are options. But still, there were no obvious signs of a kill.

Minutes later, Kerry rounded a bush and had a surprise. She put her fingers to her lips and beckoned to us. In the shade of the bush was a long, lean head. A black-tipped tail rose from the grass like a snake.

It was a cheetah, resting in the shade. But something was out of kilter - the cheetah was wearing a leather collar around her neck, like an outsize domestic cat. 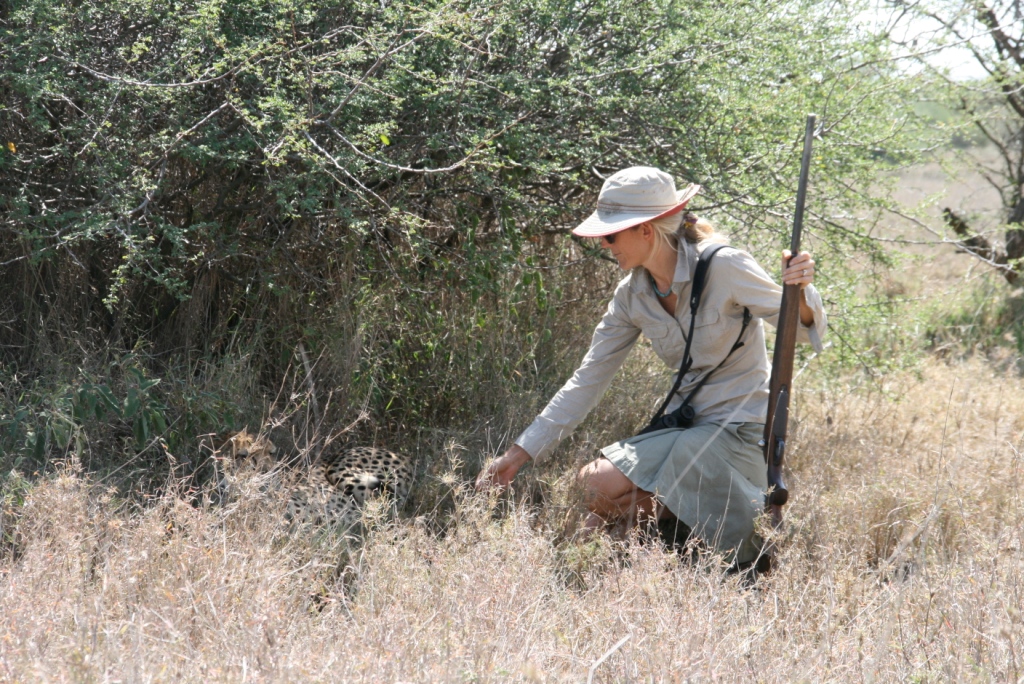 As we approached the cheetah appeared relaxed. She had either an infection or injury to her right eye, which drooped. The collar was brand new. Kerry told us that this was a female cheetah who had been ‘tamed’ by a neighbour and was being kept as a pet, although this is expressly forbidden by the Kenya Wildlife Service. The cheetah is now endangered in northern Kenya.

We faced a dilemma: to leave the cheetah under her bush, leaving her exposed to possible attack by the local herders to protect their goats and cattle. Because she was habituated to people, she might well allow herself to be clubbed to death. The second option was to try to get a rope around her neck and try to bring her with us to more remote area, and return her to her keeper.

With a single warning swipe the cheetah let Kerry know she did not like ropes. We were forced to leave her under the shade of the acacia  and to radio back to the ranch to let her keeper know her whereabouts.

Days on walking safari pass so quickly. Much of the time we walked in near-silence, just observing the land we were passing through. Endangered Grevy's zebra stallions stared inquisitively at us, the slender, long-necked Gerenuk (swala twiga, or giraffe-antelope, in Swahili) stood stock still and measured their response before bolting. Each afternoon we would arrive at a new campsite, which the support team - with help from the camels - had ingenously pitched while we were walking. All Karisia's campsites are chosen for their picturesque views of Laikipia, or are situated in the cool shade of the trees lining the Ewaso Nyiro river, where we saw long-crested eagles with chicks who called to each other all afternoon. 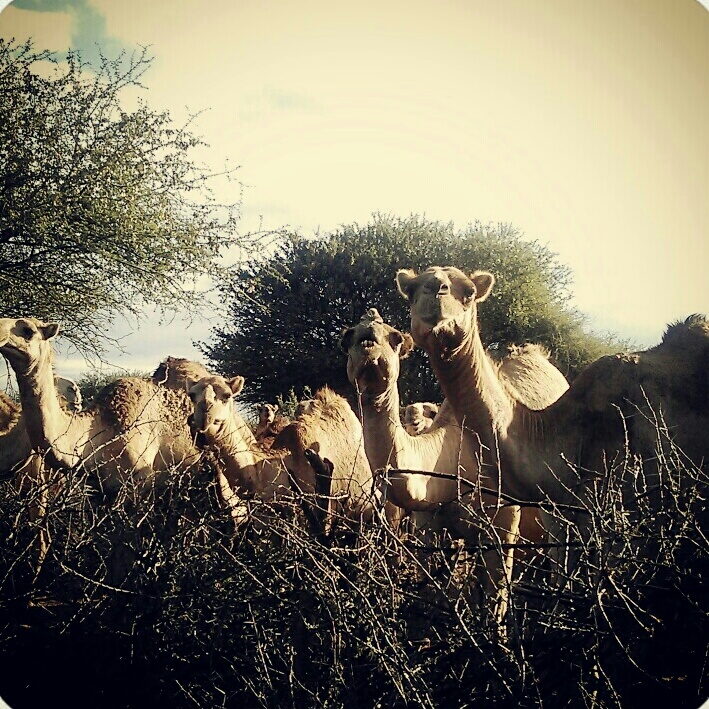 Karisia is one of very few safari companies in Kenya which uses camels as transport, and the only one to offer this level of comfort, where camels are packing good South African wine and other treats. Along on safari with us were a dozen males. The males spent the night hobbled, as they are prone to wandering off. The safari support staff sleep in a circle around them, as protection from nocturnal predators.

In the eight days I was with Karisia I heard lion only once, at a distance of about four kilometres (the sound of a lion’s roar can travel for eight kilometres). Although I did have a hyena right outside my tent one night. Karisia’s camels have never suffered a serious attack while on safari, although female camels are generally vulnerable when giving birth, and newborn camels are easy prey for leopard, lion or cheetah. 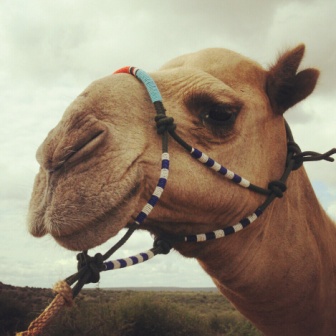 One morning back at the ranch I woke in my tent to a telltale swish and crack of leaves being torn from branches. With this sound, there are several possibilities - giraffe, elephant. I'd completely forgotten about the camels and when I poked my head out of the tent flaps to find I had been sleeping in the middle of a herd of browsing dromedaries. Camels – Karisia’s at least – are calm, if sometimes truculent, characters. I watched these females as they sucked the leaves from thorn-studded branches. They stared at me with a bored indifference, chewing meditatively, and then moved on. 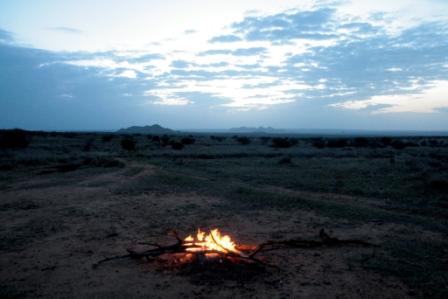 Karisia (www.karisia.com; contact Kerry Glen at kerry@karisia.com) conduct bespoke walking safaris near Nanyuki, Kenya, three and a half hours north of Nairobi. In the UK they can be booked through Audley travel (www.audleytravel.com).