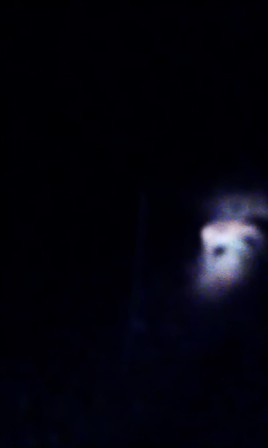 An extended version of this article is now published on the literary portal The Writers' Hub; see http://www.writershub.co.uk/features-piece.php?pc=2109

The screensaver on my mobile phone shows two clocks: one with the time in London/Dublin, and the other my present location. The right hand side says ‘Far North’; I’m not quite sure how it knows where I am, because we have no cellphone reception. I look at it wondering if I have unwittingly come to the Arctic.

The Far North refers to the northernmost tip of South Africa. We are in an area so remote the GPS has no name for it other than its cardinal direction. We spend our days only metres from the Zimbabwe border. In fact one day we unwittingly go to Zimbabwe by crossing what used to be the Limpopo river, which is now an avenue of sand. Daily Zimbabweans trickle across the once ‘great, grey-green, greasy’ Limpopo (in Kipling’s words) to walk to prosperity in South Africa, risking their lives not only by walking through lion country but by ignoring our red flags and signs and passing behind the shooting range where we practice with live ammunition.

When we are not shooting for our rifle handling  qualification we spend our days learning to track animals. There are various reasons for this. We are not hunters but students, and also guardians, because we find we are studying in the middle of a war. Not the envisaged war where Zimbabwe implodes and the trickle of economic refugees becomes an unending procession, but a war on an animal.

Although officially this is the job of the Kruger National Park rangers, we end up tracking rhinoceros and their pursuers. Almost every rhino track we find is accompanied by a sinister chaperone of bootprints – some of these are the Park Rangers, but we learn to differentiate the prints and sizes of the feet that signal interlopers. No-one other than ourselves, the Outpost Lodge, and the Kruger National Park staff have the right to be in this northernmost quadrant of the park. One day we find White rhino tracks close to the Limpopo – and so only 100 metres from Zimbabawe – and see barefoot prints, only perhaps half an hour behind. This is immediately radioed into the Park warden, who will send an anti-poaching team to investigate.

Tracking is difficult. Often the prints are incomplete, or are superimposed by a chorus of other animals. We learn about those animals which direct register, meaning their back feet fall exactly where their front feet have stepped, so the visual record looks as if they have only two feet instead of four. In the substrate our instructor Alan draws us a stick diagram: animals with a square shaped confirmation tend to direct register, he tells us. Animals who are rectangles – long-backed, sway-backed, or whose legs are overly long like the sprinter-lissome Impala, do not. ‘What do you see in Impala tracks? Alan asks. ‘Chaos.’

If impala are chaos, Kudu are order. Their tracks neatly overlay each other to create an unruffled Ace of Spades. We learn to differentiate an Eland from a Buffalo using little more than a symmetry – the buffalo are marginally rounder, and eland swirl up inside their hooves in two neat seriphs. But when these are not visible, they can look the same. Then other signs and clues come into play – dung, grazing land (eland can graze on drier and sparser areas than buffalo.) It’s a detective game that Alan clearly relishes.

I have never seen so many leopard tracks as in Makuleke. Leopard are constantly crisscrossing our game trails, circumnavigating our camp. But unlike lion in the night you never hear them are rarely see them. Like the image that fronts this text, the leopard is only a mottled smudge in the cobalt shadows of night.

Alan teaches us to distinguish between a male leopard and a female lion. They can look very similar. First of all we have to learn to tell the difference between the male and female of the species. The male leopard, with his greater weight than the female (who despite their phenomenal power weigh a demure 30-40kg), splays the track slightly outward, so that it appears more perfectly circular. Often tracking is a sheer matter of size and intent. The lion track has an authority that the leopard’s somehow lacks. The leopard is strictly nocturnal and shy; it needs canniness to protect its kills and so stealth is in-built in its stride. The lion owns the night and walks its corridors roaring his arrival.

Tracking is a mysterious pleasure. In Africa it is proclaimed as a science and an art, and has its origin in hunger-gatherer societies when an ability to track well meant the difference between starvation and abundance. You learn to read the ground if you are hungry. For us it has various driving forces: to learn more about the animal, to guard its safety, to pursue it in order glimpse it in its natural habitat, but also – we learn – to become the creature.

Alan points out a kudu track that is slightly askew. The kudu’s rear right leg is injured and dragging; he can tell this from a sequence of no more than three prints. We all practice dragging our right leg and see how it feels. Then we pause at a hyeana track. ‘Look at the angle,’ Alan instructs us. ‘What is that hyaena doing?’ He uses the present tense, as if the animal is still with us. In fact we are only a couple of hours behind it, still in the wake of its particular unstable energy of predator and opportunist. We can tell from the way the print has overlaid the dew on the substrate, so we know it was made after dewfall – dawn.

We gather around and peer at the track. The hyena’s foot pad is typically pitched at slightly less than a 45 degree angle. They walk splay-footed, penguin style.  It looks like a normal hyena footprint to us, this left front paw. ‘Look closer’, Alan urges. Eventually we see it – the print is at a slightly more acute angle than usual, with the middle digit pointing East northeast. It’s is a minor variation, like the wobble of a compass, but it’s there.

The hyaena had stopped here and was looking off to its right. That’s all we learn – that several hours ago the animal was here where we stand now, material, breathing, the hair on its flanks standing erect against the cold of the dawn, and it looked off to the side. At what, we don’t know. ‘It could be prey, it could be a member of its pack,’ Alan shrugs.

Alan urges us to adopt its posture, and we all take turns – some of us on hands and knees, others bending down – at being a lopsided hyena, our shoulders once again as high as our haunches. We feel the thickness of the belt of muscle around our necks, our skulls suddenly heavier than a lion’s, the way the onyx saucer eyes of the animal scan the bush for the thrill of frailty. 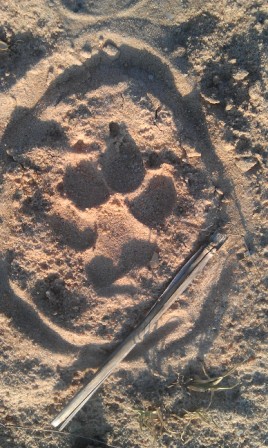 We like tracking – it’s Bush CSI, we joke, minus the pumping soundtrack and the tungsten  lighting. We are following recent phantoms partly in order to learn more about animal behaviour, but also to embody them. The cold stasis of the night as the kudu stops to register danger. The saunter of the lion that fears nothing. You can read the energy in the signs left behind.

A few days later the mood changes. On this walk I am the lead guide, charged with carrying a rifle and finding a path. Threading our way through a gorge, we come upon two sets of white rhino tracks. Rhino tracks are unmistakeable; unlike the antelope we struggle to differentiate – Steenbok or Sharpe’s Grysbok? – there is nothing that looks anything like them, with their feet rimmed by three narrow balloon toenails. The ones I find are textbook and we are able to follow them effortlessly along the game trail, up and through the fissure in the land. We enter mopane scrub on their heels. For awhile the tracks are clear, even in powdery soil and on a carpet of autumn-shed leaves. But then they vanish.

We double back on ourselves in circles and spirals, trying to recover the trail. The heat, the rumble in our stomachs, the increasingly pointlessness of the vanishing rhinos. Mopane scrub is a labyrinth; all the trees look identical. We finally look up from the ground, dizzy and disoriented.

The rhino are here, probably within half an hour of us, maybe less, according to the tracks and to various tricks Alan shows us, signalled by the state and heat of their dung. We decide to leave them. The Rhino on the reserve have been poached and are reduced in numbers. They have become shy and hesitant. It is a good sign that they have hidden themselves well in the mopane maze.

Two days later we are driving on Pafuri Main Road when we are stopped at a roadblock. The section ranger and her colleagues call our instructor Bruce over. We can’t hear what they are saying, but they have a long conversation, faces drawn, while a ranger clad in a bullet-proof vest tries to distract us with jolly anecdotes, but we know something is wrong.

Back at camp Bruce tells us what the roadside conference was about. The two rhino we tracked only a few days before were slaughtered for their horns. It happened the day after we found their trail. The park rangers discovered our tracks overlaid with a set of different tracks, two boot marks –poachers. These men were let in the main gate and after shooting the rhino with AK-47s were driven to the Mozambique border only 30 kilometres away, where they disappeared.

We eat lunch in silence; we feel queasy and empty for the rest of the day. At times at Makuleke I felt that the land was unhappy. It might be its history of phenomenal slaughter of elephant by the white settlers and big game hunters in the 1800s and well into the 20th Century; it might be because the Makuleke people were evicted by gunpoint by the Apartheid government, never to return, in 1969. But I think it also has something to do with the death of the rhinoceros. In 2012 alone, over 600 rhino were killed, most of them in greater Kruger National Park. I am not allowed to say how many white rhino have been killed in the Makuleke concession this year, or how many remain, in case the information falls into the wrong hands. But I can say that we felt haunted. The live animals we followed out of a desire to learn became actual phantoms, on our watch.

Three days later returned to walk the area where the rhino were killed. The day was overcast and hushed. Unusually for the area we saw no dangerous game, and very few animals at all – even Waterbuck and Klipspringer were somewhere else, we felt, trying to escape the funereal pall that had fallen on the land. We returned hoping to find some vestige, a survivor, a sign that the rhino had ever been there at all. But the tracks that had been so perfectly stencilled into the world only a few days before were gone.