The Storm of History - Eventilisation and the Pandemic 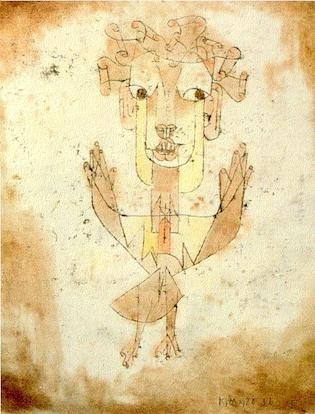 (What follows is an extract from a longer essay on the writing of Lauren Berlant, Walter Benjamin, the concept of 'eventilisation' in the context of the current Sars2-Covid19 pandemic.)

Optimism – ‘to look forward to being in the world.’        Lauren Berlant, Cruel Optimism

Cruel Optimism by Lauren Berlant was published in 2011. In the decade since, it has taken up its rightful position as a classic of contemporary cultural theory. It’s a densely argued reading of recent literature and film to investigate the latent and overt myths of desire, happiness and fulfilment. Berlant concludes that late capitalism has mass manipulated us into having deluded desires which are not only impossible to achieve but actually obstacles to our well-being.

I have dipped in and out of this book several times over the years. I understand the argument overall, but need to read some of the sentences three times. Even then I still don’t grasp their meaning – so much for three university degrees and years of sweating through Deleuze and Guattari. An example: ‘When Foucault talks about eventilization, he refers to the need to move analytically beyond the moment when a happening moves into common sense, or a process congeals into an object-event that conceals its immanence, its potentially unfinished or enigmatic activity.’ (P. 64)

In London it is a cold spring, only 8 or 9 degrees. Possibly that’s best. The continued cold temperatures will encourage people to stay indoors. We are on our first week of ‘lockdown’ – what would Berlant make of the militaristic melodrama of this term I wonder? It’s alarming how quickly the people I speak to have adopted this term. The zeal is audible in their voices, they say the word with relish, biting down on the trap of its consonants.

The skies are a cold pale blue, empty of the airplanes which loop continuously through London skies. Now birds have reclaimed them and zoom by my window on hasty missions. For the first time since I moved into my flat 17 years ago I don’t need earplugs to sleep.

This time of year – March and April – often remind me of my time in the Antarctic, 14 years ago now. March is deep autumn in the tilt-a-whirl world of the Antarctic, where due to its relationship to the 23.5 inclination of the planet, the dark comes supernaturally fast, and you lose an hour of light each day. That year, after months on base, we had a mechanical problem with the ship which was to take us out of base, and I spent five tense weeks under a different kind of lockdown. I was deployed to Antarctica as writer-in-residence with the British Antarctic Survey. Life there was intermittently thrilling but mostly iterative. For months I saw the same people, the insides of the same rooms, the same view.

Before I went to Antarctica I don’t think I understood the role of happenstance as a driver of events and of desire. You might meet a friend in the street and decide to go for a coffee. The friend might tell you of an promising job coming up at their organisation, or about a scheme to volunteer on organic farms, or a novel they have read recently and which changes your life, when you read it too. Our lives hum along on happenstance which is a front for fate. Happenstance drives the possibilities that spontaneity brews, the sudden divergences from what we thought we would do, what we thought we wanted.

In a pandemic, happenstance, and the chance that rides with it like a trusty sidekick, acquires a dark sheen. In half an hour I will go out to restock on some essentials at the corner shop and the organic supermarket: milk, juice, soup. I will wear surgical gloves but not a mask. I consider the hands to be the most likely point of infection. Also, I hate masks – too dystopian and distrusting.

But I could be wrong, and my error will cost me my life, when the person in the queue behind me does not observe social distancing and coughs onto my right shoulder, unnoticed by me. Actions and decisions or failure to take the right decision now have potentially life or death consequences. This sudden increase in the stakes of the everyday is exhausting and disorienting; it is also, in its own way, an event-within-the-larger-event of the pandemic.

…What’s personal, local and sensual about the perception of the historical present often produces scepticism about its historical actuality and exemplarity.   Lauren Berlant, Cruel Optimism

Every day I look vainly for planes. They are noisy but it’s one of the characteristics of London I love most, the unbroken flotilla of air-citadels full of people arriving into this bulls-eye of a world city, each plane signifying an opportunity to leave and gather new knowledge and experience. I often watch the planes through my binoculars as they power down on their final run to Heathrow, floating through the lemon haze of evening like vast contented sharks.

On my run around Springfield Park and Walthamstow Marshes a mesh of decisions appear. I have to stop myself from automatically petting the enthusiastic spaniel who careens up to me on the path. A lost knitted glove on the marshes – normally I’d pick it up and put it on a bench, where the owner might actually find it, but now the glove looks like a murder weapon. At pedestrian crossings I decide not to press the button for the light and instead run across between cars – I’ll probably be run over rather than die of what my mother, in her sporadic emails, calls the ‘tiny terror.’

Walter Benjamin wrote that history is a misnomer; we are creatures caught in the flow of time, unaware largely of the implications of our imprisonment: ‘our image of happiness is thoroughly coloured by the time to which the course of our own existence has assigned us.’ For Benjamin, history is created in individual memory, and memory is experienced in images, which are themselves hostage to heightened moments: ‘To articulate the past historically does not mean to recognise it “the way it really was”. It means to seize hold of a memory as it flashes up at a moment of danger.’

Benjamin’s existence was defined and ended by the Second World War, an event that revealed the falsity of the notion of historical ‘progress’, and which exposed him to a several lifetimes’ dose worth of danger. Instead of living in history, Benjamin proposed that we are living in an instantaneous temporality of the now, which he termed now-time (Jetztzeit).  As Benjamin would likely see it, our now-time has been flattened by an explosion, in this case by a once-in-a-lifetime collective experience which my friend Julia describes as like Pompeii – we have been frozen in place – after an eruption called SARS2-Covid-19, caused by a novel coronavirus which was first detected by the world outside China on the final (is there some message in that?) day of 2019.