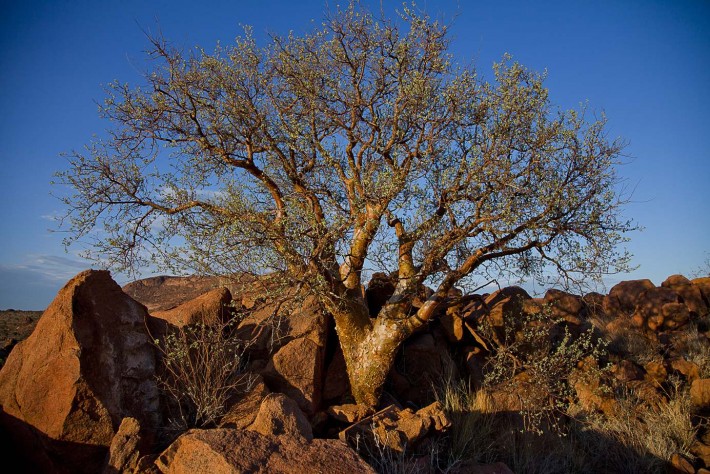 I have just returned from my third visit to Namibia. What keeps drawing me back to this desert country to the north of South Africa, where I currently live? I’ve walked 150 kilometers in the Skeleton Coast and there is something about putting that much soil and sand beneath your feet that makes you feel – rightly or wrongly – that you know a place.

To say it is a harsh landscape doesn’t do it justice; there is a resinous, sombre note to its rock-strewn amber fields, the Mars-like Kaokoveld. Then there is the gush in the names of broken-down hamlets: Mon Désir, Sorris Sorris, Torra Bay. Poetry is perhaps the best way to try to capture the abstract turmoil that Namibia instils in me. A sense of vertical freedom, a yearning and fear, and an intense but nameless feeling that comes from being confronted with nothing – no dwellings, no people, no towns, there has never been a town, nor should there ever be. No sound, apart from the wind threading through rock.

‘The Skeleton Coast’ is a poem sequence based on San (Bushman) folklore and language. Each chapter of the story-length poem is fronted by a saying or concept from this near-defunct language. These speak of the obscure intentions of the Sky God, and the trill of fear felt in your fingertips at the sound of the Lion’s Roar, the !hui, the rope or thread that connects us to God, the Janus-faced Trickster, who you think is your friend until a cutting remark burns you, and finally and most evocatively, the Circle People (the San thought of themselves as this) versus the Straight Line People – the white man.

These poems are written in homage to my friend the South African writer Stephen Watson, who wrote a definitive collection on the life and lore of the Bushman, Return of the Moon (2000). A single sequence from The Skeleton Coast appears below. The Namib tree image (above) is by Diego Ferrari.

(=ahmi: refers to Bushmen as "circle people" and the circles around the sun and moon that remind people of important things. !huijuasi: the "straight line people" (e.g., the white people).)

We grow thin, walking in

a straight line for safety.

So many days without

talent and now we are

We float in the wind.

In the darkness we will finally

talk to each other, tell

Stories of the straight line people,

who destroyed the circle people, stories of

The hunter cooled by clouds. Of the wife

in the windy city who waits