The Shooting Gallery – photography and shooting 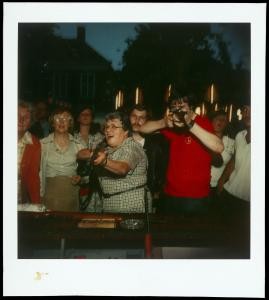 In the postwar period in Europe a strange fairground attraction emerged – the shooting gallery. All but defunct now, these booths lured punters with the prospect of shooting an air rifle, but not to hit a target and win a stuffed panda. The object was to take your own photograph. If the bullet hit the sensor, then a camera was activated, and the punter in question was rewarded with an image of themselves squinting down the barrel of a gun.

Shoot! – Existential Photography is the title of a current exhibition at the Photographer’s Gallery in central London which runs until January 2013. The works exhibited are all either sourced from these shooting galleries, or play with the double-entendre of shooting and shooting.

The concept at work in these images is complex. On the one hand, it’s about a simple parallel between shooting and shooting – whether a shutter or a bullet is involved, the moment is ruptured, and a new reality results. Then there is the play on the possibility of the photographer being his or her own executioner, but for the image to replace the vertigo of self-destruction. Instead of destroying oneself, a simulacra self is activated. The shooter symbolically frees herself.

I’ve recently been perfecting my shooting technique on the rifle range. This is not for fun but for a particular professional qualification in Africa as a safari guide. You need to be an accurate marksman in order to defend yourself and your clients against dangerous animals. I have no intention of killing anything other than in self-defence, but I’m enjoying learning to shoot more accurately.

At the same time, the violence of the act takes some getting used to. On the rifle range we shoot with live ammunition, but without the expected enraged Cape Buffalo freight-training toward you with that signature 'you owe me money' look in those black seed eyes of theirs. The guns I need to use competently are big old fashioned bolt action rifles, with a large enough calibre to kill a lion or elephant if necessary. The shock and release of these big guns is like an explosion. The bullets they eject continue their trajectory for 2.2 kilometres – and can kill, still, at that distance. And so even in a simulation the moment of pulling the trigger feels like a turning point, an unrecoverable moment of rupture.

In Shoot! Artist Emilie Pitoiset writes, ‘I collect precarious situations charged with a strong sense of imbalance.’ Her images ripple with menace and tension, with shock and psychic rifts. The violence and disruptive disorder of release unites the show’s varied bodies of work. The standout piece is not by a professional artist. An example of so-called vernacular photography (photographs taken by non-professionals), Ria van Dijk’s series of her shooting gallery photographs is at once a diary, a study in change and stasis, and the fluctuating aesthetics of the carnivalesque over time.

The cumulative effect of Ria’s lifetime of shooting herself is bizarre, unsettling and moving. In one sense it is a study of ageing, of the physical metamorphosis it wreaks upon the body. But while Ria is transformed into a young, then middle-aged, then old woman, her expression and her enjoyment at shooting remain constant. Certain topographies of her face  - her mouth - remain exactly the same at 80 as at 16. Photography is the medium for exploring transience and permanence. The faces captured around Ria in the moment also mutate in their expressions, styles, just as the carnival backdrops morph into an ever more garish palette of tangerine, gold, purple.

A conceptually accomplished body of work is by Swiss artist Rudolf Steiner, who explores the synthesis of optical laws and ballistics. He shoots a gun at the camera using live ammunition. By puncturing the shell of the camera obscura, the bullet causes rays of light to strike the surface of the film, generating an overexposed image. In the blurred uncertainty of these photographs we see a gunman, a burst of light, a hazy appreciation of violence. We become the camera, the subject of the bullet and its lethal intent. Looking at Steiner’s images I can’t help but think this is how it might look and feel to actually be shot. 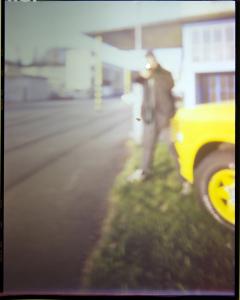 Patrick Zachmann’s image, tucked away on the stairs, also explores the relationship between shooting and being shot, in his case a graphically real situation. On February 11th 1990 Zachmann was photographing the jubiliation in Cape Town, South Africa, as Nelson Mandela was released. As the celebrations turned vocal, nervous Apartheid-era riot police reacted. Zachmann was shot twice by a policeman; Zachmann photographed him in the precise moment of being shot.

Zachmann’s photo encapsulates the existentialism of this show: to be photographed is to be killed. Your image is a simulacra of your soul, which is weakened or even erased by the permanence of the photograph’s imprint. Moving targets are not meant to be stopped and caught; like electrons charging through space and their seemingly random collisions, the flashpoint of the soul must never be known.

Back at the rifle range on a rainy November Saturday, Mickey Rowse, my rifle instructor is shouting at me. When I do hit the target he shouts, too: ‘Nice one, mate.’

I ask Mickey what got him into shooting.

‘I grew up with it. I was shooting an air rifle when I was just a tiny kid. I got pretty good at it.’

Mickey is being modest. He was twice the World shotgun champion and also European shotgun champion. He placed second and third in international rifle shooting competitions, too.

To simulate the kinds of guns I need to shoot in Africa, Mickey has dismantled the moderator – which muffles sound and recoil – on the old .243 I am using, and also taken off the scope, so that I shoot only on sights – a V-shaped rangefinder at the end of the rifle barrel. Except we haven’t even got that today, so we’re kind of guessing. 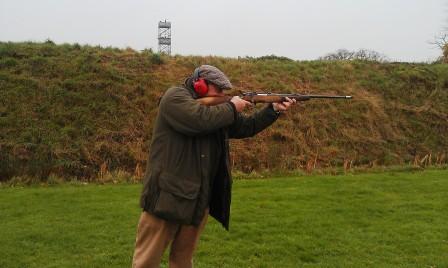 Learning to shoot isn’t so much about having good aim, I find, although that’s obviously important. It’s more about leaning into the moment and not anticipating it or bracing against the kickback of the gun. One thing novice shooters have to get used to is the concept of holding the gun right up against your body. ‘It’s like a horse,’ Mickey says. ‘You’ve got to hold it close. You’ve got more power and control that way.’ The face, for example, is held hard up against the stock of the gun, even if your instincts tell you to move it away. The gun has to be held tight into the crook of the shoulder, and you lean forward into its recoil.

That’s the trick – to welcome the explosion, to not anticipate what happens after you pull the trigger. It takes a lot of habituation to become comfortable with releasing rupture, and I wonder if I will ever be fully relaxed firing a gun. In the same way I’m not sure I will approach the click of the camera shutter, while more casual and less destructive, without thinking of the shooting gallery and its strange doppelgangering of the capture and the destruction of the self.