Recycling the Forest: Building a Visitors’ Centre from recycled and reclaimed materials 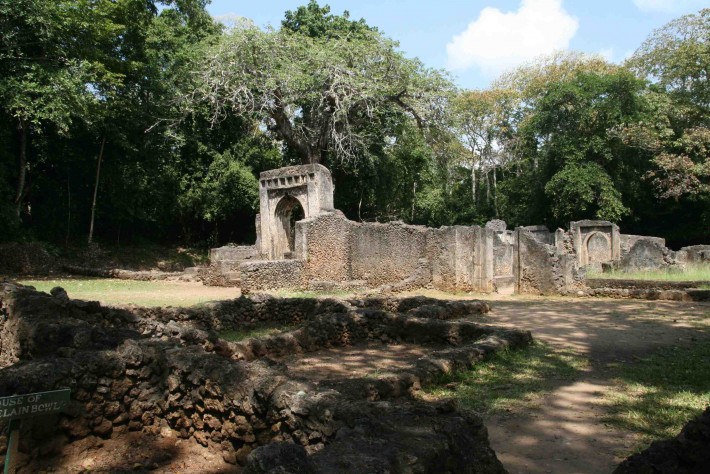 It is 4.30am and we are zipping down the coastal highway on Kenya’s Indian ocean. Our little Maruti (the ‘cash-strapped NGO 4 wheel drive of choice’) judders over speed bumps. There is hardly any traffic competition at this hour. Not even the birds are up.

But birds are our quarry, and the reason why we have slept for only four hours this night. We are in search of an elusive forest bird, Clarke’s weaver. The only known remaining habitat for this bird are two trapezoids of coastal forest located on Kenya’s northern Indian ocean coast.

The Arabuko-Sokoke Forest (ASF), which we will spend the next six hours exploring, bending under vines dripping with snakes and tracking elusive forest elephant, is the largest remaining fragment in Kenya of the dry coastal forests that used to stretch from Somalia to Mozambique. Only 400 square kilometres are left in Kenya, all in protected areas or national parks.

We watch dawn soak the ocean horizon while training our scopes on a suspected Clarke’s weaver nesting site just outside the boundaries of the protected area. The birds are rarely observed nesting, an activity that indicates a healthy species count. We melt into the cobalt shadows thrown by first light, and set out on our five-hour hike to look for them within the Brachystegia woodland that dominates the forest.

The forest has recently been fenced by the Kenya Forest Service (KFS). A rambling village of wattle and daub huts and shambas (farming plots) now encircle the forest perimeter. Trees just inside the fence’s perimeter are sparse. Kenya’s hardwood forests are being lost at a rate which is unsustainable. Population growth and poverty are twin culprits. Illegal harvesting of forest trees by people, particularly valuable tropical hardwoods, is now the chief destroyer of the coastal forest (it used to be the forest elephant). The fence is designed to keep the elephants in and the people out. On the elephant front, it is doing its job. But in desperation men are taking their pangas (machetes) deeper and deeper into the forest, braving the elephant and the buffalo and even a single male lion recently spotted prowling the perimeter, to hand-pick hardwoods such as African blackwood, prized for the carving of crafts and furniture.

The booming calls of Fisher’s turaco reverberate through the dank forest like French horns. In Arabuko there are two mammals found nowhere else on earth, the Golden-rumped elephant shrew, the whippet-sized russet Ader’s duiker. We see both of them, the little shrew’s unmistakable slash of lucre on its hindquarters, we witness the duiker’s signature dive into pools of shadow, and one of the amphibian species, a tiny pygmy puddle frog (pictured below) vaults onto our hands. But the The Arabuko-Sokoke Forest is being bitten into fragments. Its reduction is happening from the edges inward, a terrestrial erosion.

One way to arrest the decline in the world’s forests is to educate people, both locals and visitors, about their value. Recently I was charged with writing a proposal for a new visitors’ centre to the Arabuko-Sokoke, which, if it goes ahead, will be built by Kenya Forest Service and will placed at its northern entrance near the roadside village of Gede.

Prior to starting work I was shown scanned images of what I assume to be the architect’s drawings and am amazed to see that the structure will be built entirely from recycled materials and reclaimed wood. For example, instead of windows, plastic bottles – thousands of which are thrown into landfill here – will be employed to make mosaic windows.

The project’s designer and builder, Andrew McNaughton, was a design concept originator for large commercial spaces for over thirty years, based in Nairobi. Now he makes furniture and art objects almost entirely from marine debris. He takes the doum palms and teak that drift in from the sea, even the daily flotilla of washed up plastic flip-plops, toothbrushes and plastic bottles, and employs them in constructing objects of real elegance but which also carry a conservation message.

‘The visitor’s centre will be 100% reclaimed and recycled materials,’ McNaughton tells me. ‘You will enter it as if entering the forest. It will be completely organic.’ These concepts – recycled, reclaimed, organic – are now very often used in the lexicon of sustainable architecture. Although almost never for public buildings in Kenya, where sustainability is considered a rarefied approach suitable only for top-end safari lodges. The piles of flipflops, lighters and driftwood in McNaughton’s workshop attest that his materials are genuinely resourced from natural efflux and waste. The forest itself challenges us to reconsider our relationship with constructed space, with its natural weave of interior and exterior. We feel simultaneously enclosed within a structure, a vast natural pattern, and also released from such strictures. The Gede Forest Visitor’s Centre is designed to embody and reflect this paradox, with its seamless walls and marine lighting, so that visitors have the feeling of walking into one of the natural ampitheatres the forest often generates.

The centre will be located near to the Gede ruins (main photo), a Swahili civilisation city abandoned in the early 16th Century. It will be made from the same building materials used in most structures up and down the coast – makuti, or coconut palm thatch, and mabati (corrugated iron sheets) for sealed roof covering. Sawn tree stumps from dead forest trees will provide the seating at the entrance. A spiral staircase will convey visitors up to the ‘Tree Gallery’, an upper deck made from reclaimed wood. Meanwhile display panels set around the circular structure will inform visitors about the wealth of tree species in the forest and its endemic animal, bird, and insect life. Light will filter in through the semi-transparent ‘litre lighting’ as McNaughton terms his litre-sized plastic water bottle panels. All materials will be locally sourced.

The centre will be an educational facility in itself. What is ingenious about the project is that the revenue from souvenirs and snacks sold at the centre will be fed into an existing education programme for local children. In Kenya, secondary school is not free. Once their children have left primary school, education costs about $300 US a year per child. Many families in the area live on less than $1 a day. Children’s education effectively stops at 11 years old. Or, in some cases, families take to poaching and illegal hardwood harvesting in an effort to keep their children in school.

The ASSETS education programme is the brainchild of A Rocha Kenya, and their scheme of secondary school bursaries is tied to conservation initiatives. Children learn about the importance of conserving the forest. A condition of support is that the families of the children sign a statement promising not to harvest forest wood. Children and their families spend time in the forest planting seedlings, and removing exotic and invasive species. They are urged to look at the forest as a repository of their education and not a resource to be plundered. Instead of the forest being used to send children to school, schoolchildren will send the forest into the future.