A re-wilding diary: animal invasions in an Indian ocean house 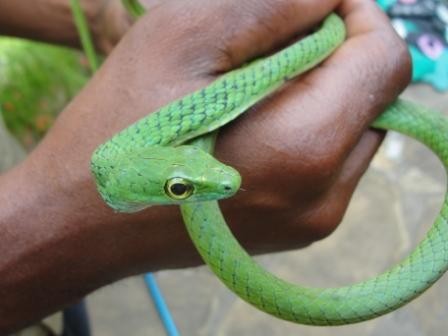 In Africa, you don’t have to go on safari to see wildlife, you can have a mini-safari in your own backyard – in this case a five-acre piece of land on Watamu beach on Kenya’s Indian ocean coast.

It’s easy to overlook the nature in our immediate environment, even when you are in a wilderness area. Watamu is a thick finger of land sandwiched between the Indian ocean and an extensive inland creek system where mangroves flourish. It’s hot, humid, subject to stiff winds of the monsoon of the moment, the Kaskazi, and to sudden slow curtains of rain that seem to stall mid-air, then disappear.

The land here is divided up into ‘plots’. My temporary home is a five-acre parcel of beachfront land characterised by sand dunes and an intact indigenous riparian forest of casuarina, bambakofi, doum and coconut palm trees. The house is a Mediterranean-style beachfront villa which is open in part to the outdoors; in theory anything can squeeze in through the louvered windows and the iron grates that stand open all day to allow sea breezes to scour the house.

Here, borders between inside and outside, tame and wild, are dissolved. One morning not long ago, my host walked into the living room and saw that he had acquired a new sofa cushion overnight; a water monitor lizard lay sprawled across the back of the couch, sunning itself in the morning rays. Plated lizards routinely steal the cat’s food, then hide themselves under the refrigerator as I enter the kitchen so I spy only a thick chocolate-coloured tail tapering to a sharp point and one fat leg poking out.

Then there are the ants. Ants are hardly in the order of lions and elephant in the wildlife sighting excitement stakes, but what they lack in drama they make up in numbers. My theory is that they are orchestrating a take-over of the plot; they are merely waiting for us to move out so they can crank up the stereo and make short work of the crisps. The house is home to trains and traffic cones, bonfires, mud-slides, superhighways and aortic veins of ants. As I write a mini-swarm of honey-coloured ants is fixing to airlift a flake of my morning toast to their lair.

Then there is the avian invasion. Ill in bed on New Years’ Eve, my party companions became a pair of abseiling bats who flew into the bedroom through the windowless windows and proceeded to chase each other in elliptical swirls. Other invaders have their eye on the chocolate boxes and packets of nuts unwisely scattered about this most permeable of houses. My host had to chop a limb from the bambakofi tree outside to discourage the russet-rumped Sykes’ monkeys from invading the bedroom. More recently, fork-tailed centipedes - which can deliver an acid-like burn - were found attached to the curtains of a guest bedroom. Water monitor lizards sometimes make a home in the roof, clumping around like noisy upstairs neighbours, and lost ghost crabs tap-dance through the living room. We have to throw tea-towels over their head and cart them down to the beach. As soon as they smell water, they head back to their under-sand burrows.

One visitor caused a stir recently. My host was walking up the stairs the other day when a piece of rope caught his eye. The rope was green and entwined around one of the framed paintings on the stairway. He stopped dead. The green mamba is a fairly common snake in these parts, and its bite is fatal. My host backed down the stairs, reached for his camera with one hand and his telephone with the other. He rang the Bio-Ken Snake Farm, a local centre for venom-farming for anti-venin. Within minutes they had arrived and pronounced our visitor a green-spotted grass snake. Mr grass snake was persuaded to leave the premises by the experienced handlers. For a snake, he was quite pretty.

Keeping a wildlife diary here has sharpened my senses. These daily invasions can become so routine, we hardly notice the ghost crabs and the geckoes anymore. Elsewhere, too, people have started to pay attention to the micro-life in their immediate environments. An urban rewilding movement has emerged, for example, in part expressed by the popularity of television programmes such as Foxes Live, part of Channel 4's Wild in the City series in the UK, which tracks the fortunes of families of urban foxes in real time, using night vision and thermal imaging cameras. The programme has been a hit. Who would have thought the nation would be gripped by the plight of urban foxes?

The rewilding movement calls for a rethinking of the conflictual model of animal-human cohabitation, in which the interests of people and animals collide, with the animals usually losing the fight. Its proponents are writers such as George Monbiot, whose stirring polemic Feral was published to acclaim and controversy in 2013. In Feral, Monbiot makes a compelling case for the reintroduction of vanished species, and a regeneration of an increasingly denatured landscape in the UK, which has been given over to cultivation or housing development.

Rewilding is an expression of our changing relationship to the natural world. We have come a long way from Thoreau’s Walden. No place is any longer only one place; it is a conceptual as much as actual terrain where competing needs for resources are played out. With the exception of a few natural landscapes such as the Antarctic, which has never been a site of human settlement, there are few true wildernesses on the planet. There are few clear demarcations between pure and sullied, inhabited and uninhabited, pristine and polluted. Instead we see increasingly interactions, interstitial landscapes where wilderness and built environments intersect.

The last decade or so has seen a flourishing of nature writing in the UK particularly, in the form of books such as Robert Macfarlane’s history of the wilderness in the UK, The Wild Places, or Jay Griffith’s Kith, which invokes images of inner wildness that would have been familiar to William Blake, or fusions of memoir and introspection by authors such as Mark Cocker’s Crow Country and Richard Mabey’s Nature Cure, or autobiography - Tim Dee’s The Running Sky and Four Fields  - or Kathleen Jamie’s Findings and Sightlines.

Why has this nature writing revival taken place here, and why now? It could be that the urgency in new nature writing reflects an episode of cultural anxiety in the UK as people become cut off from the natural process of the land. It’s not clear, however, whether the rewilding movement is a radical or an essentially conservative impulse. Do we seek to turn back the clock in a retrograde mission to re-establish a wild which never existed? Is the aim to return Tesco-clogged landscapes to a more wild state reflective of an actual original state of pristine savagery, or is it a cultural hallucination on the part of the Whole Foods brigade?

Back in Watamu, I patrol the perimeter of our plot at twilight, looking for signs of life amid its stone terraces draped with coral creeper, bougainvillea and frangipani. Osprey eagles and black starlings perch in the neem trees by the ocean and trumpeter hornbills hold a swaying sundown caucus in the thin branches of the casuarinas. Each day brings some new visitation in the animal-human interaction of this coastal forest. As I write an adolescent Sykes’ monkey peers at me while grooming under the shade of the bambakofi and a tiny lizard slaloms down a wall. The black and brown cat who is the only legitimate animal inhabitant of the house prowls the room restlessly, looking for small creatures to terrify.

In the tropics night falls like a velvet curtain dropped on a stage. Soon battles for survival will rage on the beach between ghost crabs and fledgling hawksbill turtles. Stingrays, stonefish and Portuguese men of war will ebb and flow with the ocean tide. The wild always involves at least a hint of danger. Between the safari ants, the lashing sting of centipedes, or the six-hour long wail of a Portuguese man of war tentacle, humans are participants in a struggle for defence and supremacy. It is this awareness of our vulnerability that rewilding promises to sharpen, and with it to bring a new alertness to one of the essential meanings of wild, that of an uncontrollable force. The wild is ever present in the recesses of the house here – the ghost crabs who cling to the curtains, the plated lizards getting fat on cat contraband, the capillaries of ants fanning across the kitchen on their mysterious nocturnal missions. Upside-down geckoes will chase each other across the ceiling and bats will play tag around the bed. Tonight we will cede the house to the wilderness, and hope it lets us stay.