The Novel: a survival skill – reading fiction with Tim Parks 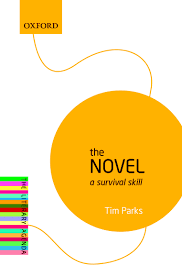 For the last six weeks at UEA we’ve been fortunate to have Tim Parks as UNESCO City of Literature Visiting Professor. The UNESCO scheme brings writers of international repute to the university under the umbrella of the UN agency’s Cities of Literature programme, of which Norwich is one. Parks delivered a series of lectures to students and staff based on ideas he has explored recently in his book The Novel – a survival skill. Half guide to reading great novels of the 19th, 20th and 21st centuries, half renegade literary critique, the book is a unique resource for readers of novels of ideas.

Parks’ visit to campus also coincided with the publication of his latest novel, Thomas and Mary. In fact one of the most apparent characteristics of Parks’ work is its sheer volume: as well as being Associate Professor of Literature and Translation at IULM University in Milan, Parks is the author of some seventeen novels, nine works of nonfiction, and sixteen works of translation, including novels by Antonio Tabucchi, Alberto Moravia and Italo Calvino. He also writes essays and reviews for The New York Review of Books and the London Review of Books, a fearsome duo of haut-culture critical journals where few mortals are ever published, let alone shared between them. (When asked at a recent UEA literary festival event how he manages to be so prolific in comparison to most writers, Parks’ response was typically deadpan: ‘I don’t know, perhaps other people don’t write enough?’)

The Novel – a survival skill is published by Oxford University Press in their The Literary Agenda series, whose manifesto is to reinvigorate the meaning and value of literary reading. Parks’ contribution is to refute the formalist notion that biography has no place in literary critique. He deliberately reads authors’ lives into their novels, and sees their lives and work as forming a conversation. He looks for patterns in the life which then find expression in the work. For example, Hardy’s melancholia and pessimism and its influence on the extraordinary transcendant gloom of his novels, or Dickens’ acute awareness of social status, which he pursued so ruthlessly as to banish those he loved who he perceived stood between him and his ideal of social success, or Joyce’s competitive, maximalist insistence upon being the best, which had its roots in a childhood marred by a feckless father.

In his weekly seminar with us, Parks focused on exploring this organising principle of reading he has been developing over many years, which he terms ‘semantics’. These are ‘worlds of feeling’ in novels, created for them by the dominant psychological tropes of their authors. Parks acknowledges the influence of systemic psychology in forming these paradigms, in particular his dialogue with an Italian psychologist, Valeria Ugazio. By no means comprehensive or reductive, these semantics are loosely structured to describe the dominant tensions and ideas at play within the worlds of feeling Parks has identified. He calls these structural approaches to feeling: ‘winning/losing’; ‘the desire to belong; being worthy of the group’; and ‘freedom: the tension between fear and courage’. These worlds of feeling might intermingle, but one of them will usually emerge as the governing force, Parks argues, and in many cases a writer will write many books exploring the same paradigm.

To illustrate this example, he marshals the work of Thomas Hardy, with his insistence on subjecting his characters through the most punishing ordeals imaginable simply for pursuing love, or self-fulfilment: ‘Everything that can go wrong, does, in a Hardy novel.’ But somehow, when taken as a whole Hardy’s oeuvre does not feel repetitive, or as if he is raking over the precise same ground thematically. The novels are too various for that, Parks claims; a similar world of feeling is created over and over again, in ingenious ways. This is part of the novelist’s resourcefulness, to find ways to return to the same material yet somehow make it new each time. Often, the writer may well have been aware of their semantic to only a limited degree, particularly those writing before psychoanalysis and its delineation of conscious and unconscious motivations. Semantics draw their voltage from their latency, and the writer’s obsession with certain themes is ultimately an attempt to resolve tensions underneath the surface of his or her life.

The point is not to ‘explain’ these works of fiction via the conduit of biography, or even ordinary psychoanalysis. Rather, Parks suggests that literature is a conversation between writers and readers whose lives will be governed by the same paradigmatic oppositions. (And in fact readers may be drawn to a particular writer for just this reason). This is one way in which literature operates as both as both a transcendental communiqué and salve – it seeks to reveal the enigmas that underpin much of our lives, and which have their origins in the obfuscations of the self. Novels become a commons where experience between readers and writers can be shared.

‘A novel is, at source, a world of emotions,’ Parks told us. Reading is a personal experience, he suggests, as much as a cultural transaction in symbolic capital. A person wrote the novel, a person reads it. What moves between these two consciousnesses through the text is a communion of shared life experience. It is a subjective, refreshing and ultimately humane approach to reading.