The Ninth Wave – writing at sea

Force 12 seas in the South Atlantic 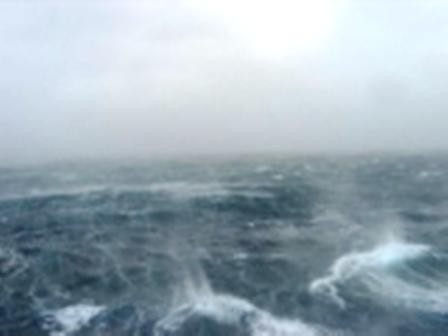 I have written substantial parts of my last two books at sea, much of them typing with one hand while clinging to the desk with the other, keeping a leery eye on the cabin window to determine which stage we were in the great oceanic washing machine cycle. If the porthole was submerged, it was bad. If I suddenly found myself horizontal when I thought I had been standing, or vice versa, then it was bad. If we only had Uruguayan beer and ran out of fizzy water somewhere over the mid Atlantic Ridge, well… this actually happened, and it was Bad.

Being at sea, especially in the middle of the ocean or in the Arctic and Antarctic where rescue is logistically difficult or impossible, I felt both capable and vulnerable. We were removed from the world. We were each other’s only rescue. I was often lonely but never alone. There were regular meals, someone to talk to, always – in the bar, in the Duty Mess, on the bridge. Or I would talk to my chaperone, the Wandering Albatross who often accompanied me, flying stalwart and unmoving for days outside my porthole.

Arriving at the edges of the world – land – after a long time at sea, the world looks strange. Shops, hills, trees, coffees, money, newspapers. What do we need this for? And how capable we feel, that we have steered our way across an immensity. I’m not sure if anyone who has sailed long distances either by sail or even by Marine Gas Oil is the same at the end of the journey, however nerve-shreddingly monotonous they may have found parts of their voyage.

I have been writer-in-residence at sea several times now. On Royal Research Ship James Clark Ross, a British Antarctic Survey vessel and on the RRS Ernest Shackleton. Together these ships have moved by body intact from the Falkland Islands to the Antarctic and back, from the Falkland Islands to northern Europe –  the majority of the length of the Atlantic Ocean – and from the UK to Western Greenland and back, a near-transatlantic crossing.

A body of work, The Ninth Wave, charts the relationship between writing and long ocean passages. The title essay was written aboard the James Clark Ross during our passage from the Falkland Islands to Vigo, Spain, in spring 2010. Another story, ‘The Most Beautiful Voyage in the World,’ partly excerpted here, is a futuristic take on an Arctic cruise ship, written when I was invited to join a ship to Arctic Norway and the Russian border in spring 2011.