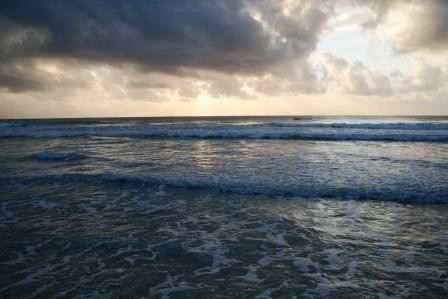 Sunrise on the Indian Ocean creates a visual effect more moving than any other sunrise I have seen. It’s something to do with how the sun emerges from the ocean, often – at least in this kusi (see below) season – accompanied by lunkheaded clouds, through which it filters and refracts.

In the evenings, when the sun sets over land, the sea holds the light much longer than either the land or the sky, creating an elongated platinum twilight. In early September we are coming to the end of the kuzi season, or southeasterly trades. The wind shifts later in the year, from December to March, to a northerly kaskazi.

The dhow, a traditional fishing and cargo vessel, is probably the most iconic symbol of the African coast of the Indian ocean. They have one or two masts and a pointed stern. 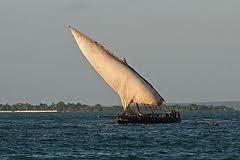 I love the language of dhows as much as their physical presence. Powered by a single square of madrouf, or rough cotton, they lean into the horizon, a slender yearning profile against the massive skies. ‘Dhow’ itself comes from the Arabic word dawa. There are several designs: the ngalawa is based on an Indonesian double outrigger design first brought to the western Indian Ocean over 1,500 years ago, while the jahazi is a small dhow used for fishing and cargo.

While I have never been on a dhow, let alone on a dhow safari, I wrote the poem below. It is set in Mozambique and Tanzania  because of the resonant and captivating placenames further down the coast – Kilwa, Ibo, Quirimbas.

Following it is another short poem, loosely about the Kuzi, the southerly trade wind. In our Kenyan exam at the Lewa conservancy in August we had to answer a devilishly phrased question about the direction of this wind, which in my mind assumed the form of a riddle.

Flare of sun in a blood ocean. On nameless islands we

maroon ourselves, cook cockles and prawns

in the October trades. At night his face shines

us from Ibo Island to Kilwa, a forest of

is turquoise. It’s not him I want, but the prow

of moments when gold becomes gold, a seeking.

Slender hours in the Quirimbas he spears

pink octopus with his javelin under the bone

moon. Our drifter dhow fuelled by a square

of madrouf. A cold coast on the other side of this

between us. Outrigger penitents, we sleep

in the teak hull that sings to us all night.

Sharks bask in our wake.

water pouring from him

from the muscle above the shoulder where

scything back alabaster in the keen sun

how we find ourselves so quickly in another country

in Diani at 5am the night after my birthday

the night one year rolled into another

our anchors these oceanic days

dhow clouds leaning into the horizon

it rained that day, last rains of the Kuzi

wind swinging on its haunch –

if you stood in Mombasa

on August 8th with your back to the wind

which direction would you be facing?

Somalia in all his blondness