How to Save Britain's Wildlife? 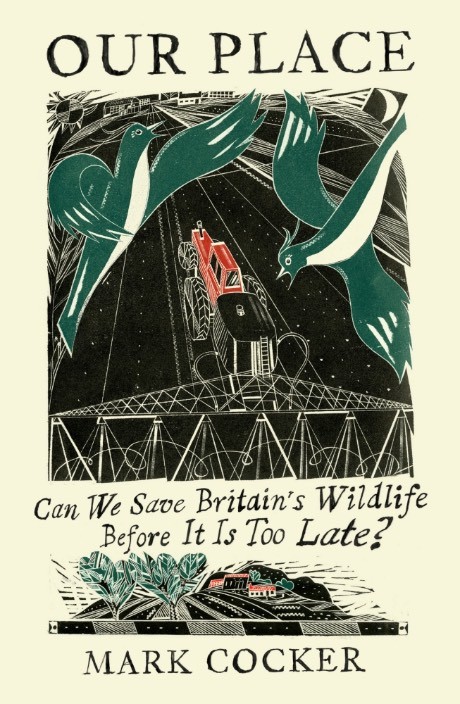 The first step to answering this question is to read Our Place by Mark Cocker. I read Cocker’s ninth book, published this April, in advance of interviewing him for the recent Norfolk Festival of Nature. A world-renowned authority on birds and a long-time Norfolk resident, Cocker has turned his formidable descriptive and analytical skills to the question of the book’s subtitle.

What does wildlife need saving from, you might ask. The answer is: us. We are living through and perpetrating the largest extinction of species in the British Isles since the ice age. Aptly, considering the Conservative party’s present obsession with nationality and belonging, Cocker frames this in terms of a dereliction of duty to our fellow citizens: ‘We are bulldozing our fellow Britons – between 60,000 and 80,000 species of animal and plant – over the cliff into oblivion.’ Why?

Cocker begins his investigation with a description of Blackwater, the five acres of land on the banks of the Yare river he purchased a few years ago, in part to conduct a rewilding experiment. He doesn’t put on the rose-tinted glasses. Depending on the season, his land can be a ‘stinking soup of anoxic sludge’, an awkward, turbid riparian plot where ‘great foul gloops of marsh gas engulf you’. It is also graced with piles of towering sallow, hemp agrimony, great hairy willowherb and meadowsweet where marsh orchids thrive amidst ‘starburst blooms of ragged robin.’ In Cocker’s rendering, nature retains its often jolie laide character.

Cocker ploughs through acreages of text, digesting the 2013 State of Nature report, the Common Agricultural Policy and the Farmland bird index, in part so that we don’t have to. He discovers another dominant culprit besides ourselves: land - specifically patterns of land ownership, which is concentrated in the hands of an entrenched elite in the British Isles, and also landlessness, which is the position of the vast majority of those of us who live here.

Women, as it turns out, have been central to conservation initiatives in Britain since the 19th Century, including Octavia Hill, the founder of the National Trust. Among his other findings is a an element of hypocrisy. In the UK we are a nation of joiners of conservation organisations (RSPB: 1.2 million members; the National Trust and the National Trust of Scotland combined count 5 million, or one in every 10 British voters), but we do not have the vision or the gumption to fight for nature when the chips are down. Instead, we turn to gardening. Cocker writes: ‘The whole approach to environmentalism in this country is sometimes construed as a form of gardening, with its associated fetish for perpetual meddling.’

Our Place hits many notes at once: descriptions of specific places close to the author’s heart which have the density and precision of an etching; a cri-de-coeur to reverse decades of political neglect and the wrong-headedness of the Common Agricultural Policy; a social history of conservation in Britain and an indictment of a permanently supine posture, politically. When faced with a catastrophic picture, we take the Prince Charles approach, flocking to join conservative, even patrician, conservation organisations, especially the National Trust, with its Chippendale mansions and tea-towel gift shops, and the RSPB and its ‘kitsch’ anthropomorphising campaigns: vote for bob the squirrel.

There are no pastoral paeans in this work, perhaps because such delusional sentimentalising of nature is partly responsible for our dereliction. Cocker has condemned the consolatory capacity of books about nature as ‘clothing a landscape in fine writing’. His own ‘poetry of fact’ (his term) is an amalgam of expertise and often bravura lyrical writing: the skylark ‘drizzles down its zany granular song’, is just one of many examples. The point is not to impress the reader, but to cause her to see, hear and perceive the natural world anew.

Often, the flaw of state-of-the-nation dissections, including polemics, is while their authors are efficient dismantlers of the status quo, they cannot offer an alternative vision, or a way out. Cocker concludes with ten truths; not solutions per se, but which can inform how we tackle the problem. ‘Hope is written into all our connections with the rest of nature, and it is a two-way process,' he writes. 'Yet because it is so central to our relationships with each other, we continue in denial. And what we have done to our country becomes the truth that dare not speak its name.’

In his introduction, Cocker reveals he set out to write ‘a short polemical book’ but decided he was constitutionally incapable of writing a tract. I disagree – He has, for one, identified a flawed reflex in our thinking about nature in the UK: we have an inbuilt tendency to see nature as something over there, separate from us, to be cherished or managed, but ultimately subordinate to human consciousness. We must start to see ourselves as being in nature, Cocker writes. To save nature is to save ourselves, and everything else.