South African artists protest the destruction of the rhino 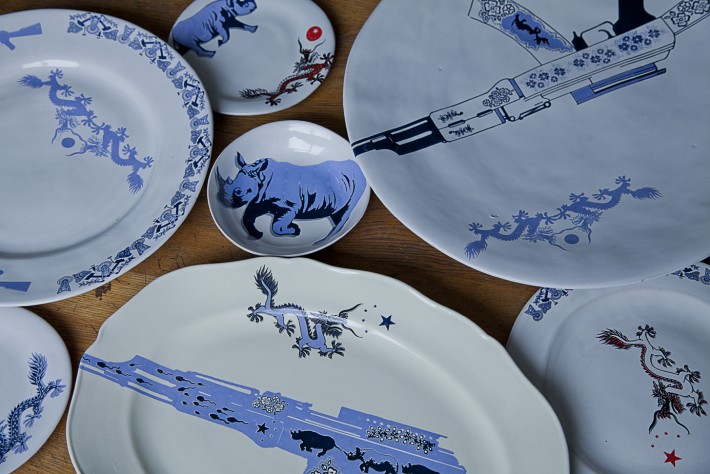 Cape Town’s Design Indaba (a Zulu word meaning ‘matter for discussion’) is an annual exhibition of the best of design, arts and crafts of southern Africa. This year I made a surprising discovery amongst the packed aisles and stalls featuring hand-knit cushions, silver jewellery and futuristic furniture.

Mervyn Gers is a self-taught ceramicist with a thriving commercial business, making stoneware for restaurants, cooking schools, high street store chains and wine estates alike. His plates, bowls and milk pitchers feature designs taken from classical Japanese and Chinese ceramic design. Piebald catfish nose happily through the bottom of his bowls, pursued by smiling dragons. But next to these lullingly familiar images I saw something so unprecedented I had to look three times to make sure of what I was seeing.

Three large dinner plates hung in a tryptich. On the centre plate was a semi-automatic machine gun fringed by flowers and pointing toward the left hand plate; on this a smiling blue rhino was running across a white expanse. To the right, a livid Chinese dragon trailing a single red star spewed flame behind the stock of the weapon.

Rhinos – guns – Chinese dragon: it’s not difficult to read the story Gers is writing. What first caught my eye was the blunt novelty of seeing an AK-47 on a dinner plate. On closer inspection I saw that the weapon was loaded with unusual ammunition: little tadpoles. Or sperm; I wasn’t sure and the busy corridors of the Indaba didn’t seem the place to inquire. Several days later at his studio in the industrial flatlands near Cape Town’s harbour, I asked Gers why he chose this incendiary imagery.

‘It’s all about sex, isn’t it, fundamentally?’ he replied. ‘Rhino horn is desirable in Asia because of folk beliefs around its value as an aphrodisiac. This has no basis in fact, nor do rhino horn’s supposed medicinal properties. It’s fact made of keratin – the same substance as human nails. Basically, it’s an enormous fingernail.’

However delusional, beliefs about its properties in Asia are no joke for the rhinoceros. Its horn is now worth more per ounce than gold; a kilo of powdered horn is worth $65,000 in China; ivory from elephant tusks, meanwhile, is worth $900 per kilo. They money paid to poachers, smugglers and shippers is so vast that in late 2012 then-US Secretary of State Hilary Clinton commented that the trade in illegal wildlife had become second only to trade in illegal arms and drugs.

The story of the rhino slaughter can be told in cold numbers: only 3,000 black rhino remain in the wild in Africa; in 2012, 618 rhino were killed in South Africa alone – a 50% increase from 2011, and an astonishing 5000% increase from 2007, when only a handful of rhinos across Africa were killed. The slaughter is now at a level where it is likely to lead to population decline. Rising affluence and a proportionate increase in traditional medicine use in the Far East is to blame. In the case of elephant, a newly affluent Asian middle class are buying exotica and ivory has become a status symbol. In Kenya, elephant are taking the hit – in 2012 375 elephant and 20 rhino were lost to poaching.

As with human death, numbers become an abstraction next to the real loss. You have to spend time with both these giants to value their idiosyncrasy. Both rhino and elephant temperamental and dangerous to humans if provoked or disturbed, it’s true. But they are also intelligent, charismatic animals – playful, curious, shy and communicative in equal measure. Rhinos may look antediluvean but they are surprisingly agile, funny and gentle, under the right circumstances. Even a day spent in their company is enough to convince one of their right to exist – and persist – as a species.

However, when a wild animal’s body part becomes worth more than gold, you know they’re in trouble. The potential profits have attracted the interest of international crime syndicates; ‘increased firepower and ruthless tactics,’ are being used, according to the US State Department. Poachers have adopted military capability, employing helicopters, night vision goggles and tritium night sights on weapons. The money at stake also means the poachers can buy rather than shoot their way in; increasingly it’s an inside job. Wildlife veterinarians, park rangers and game park owners have all been implicated in rhino deaths. There is also the human cost – across Africa 100 people, the vast majority of them park rangers, are killed every year while defending wild animals from poachers.

Back in his Cape Town studio, I tell Gers, ‘You couldn’t make it up – it’s just so absurd; who would have thought that its horn would spell the potential end of the rhino.’ It is half dystopian fable, half dark parable of human hubris.

Equally unlikely perhaps is Gers own journey. He grew up in a small town in the Northern Cape’s Kalahari desert – ‘so small there were only twelve of us in my graduating class.’ His family discouraged him from studying his first love – art – in deference to making a living. He worked in marketing for years, a skill he now puts to good effect in his ceramics business. He never thought of himself of an activist, he tells me, but over recent years he has felt an increasing outrage at the destruction of African wildlife, and also at the unchecked influence of China on the continent. Several of his plates feature mining towers – a critique of how China is ‘sucking Africa dry’ of metals and primary commodities. 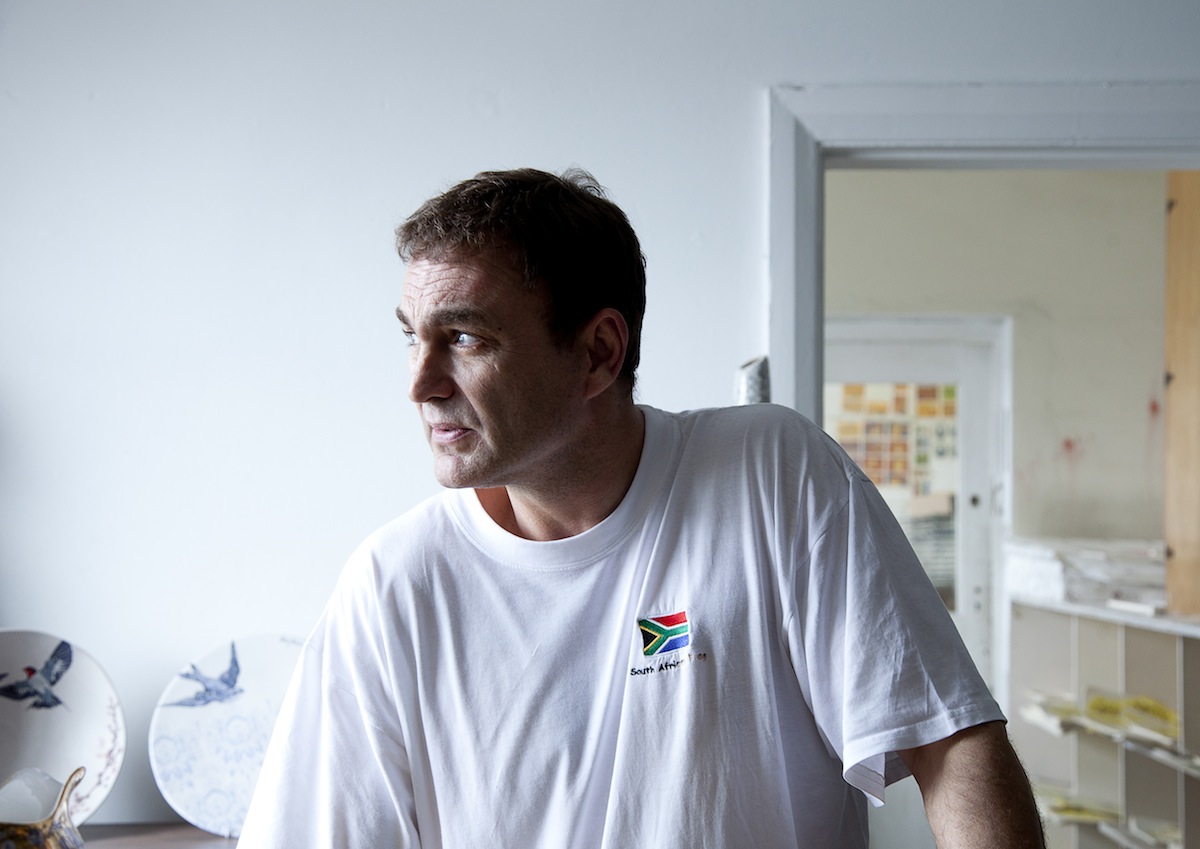 Gers’ usual trade is in bespoke decorative ceramics that people want to have on their dinner table – no guns and oil-extraction towers here. He shows me carefully aligned five-piece dinner sets, where sections of catfish screenprinted on the dinnerware line up to form a perfect five-part fish. I ask him how he first thought of using his pottery to make a statement.

‘I had the idea of doing guns first, but to make them pleasing, in some way. I wanted the designs to be soft and palatable. There’s no point in frightening people. Plus we’re exposed to enough graphic images of guns and mutilated rhinos every day.’ This violent and repellent imagery is necessary, we agree, to motivate and campaign for change, but it is not something he was prepared to replicate.

The initial body of work was completed in two days. He worked originally with classic Blue Willow patterns – one of the best-known design compositions in the world, working in pale blue pigment.

‘I didn’t want to be didactic,’ Gers says. ‘Instead I wanted to work with familiar designs. People would see the work and ask me, what’s this all about? I’d say, what do you think? You can make up your own mind.’

And they do. ‘A very well-known and respected potter came up to me at the Indaba and said, “what’s going on here? You’ve lost the plot, man.” People have either loved it, or hated it.’

We discuss the complexities of the trade in exotic wildlife and animal parts. I tell Gers how, in Kenya, poaching of elephant is carried out in some cases by well-armed Somalis; fees for procuring ivory for the Far East markets have been linked to the Al-Shabaab militia. The new geopolitical instability caused by links between the rhino trade, China and the ‘war on terror’ has spurred the US to take a tough stance on the trade in illegal endangered wildlife and animal parts.  As with climate change, the solution feels beyond our remit or control. What can we do?

‘You can legalise and farm rhino horn and ivory,’ Gers says. ‘Horn and tusks grow back. It you do that, the rhino and elephant will stay alive. Education isn’t going to work in the short term – education takes one or two generations. Just as with drugs, legalising is the only hope.’

A few days later, I came by another body of work – also by chance – that has the rhino’s decline as its subject. 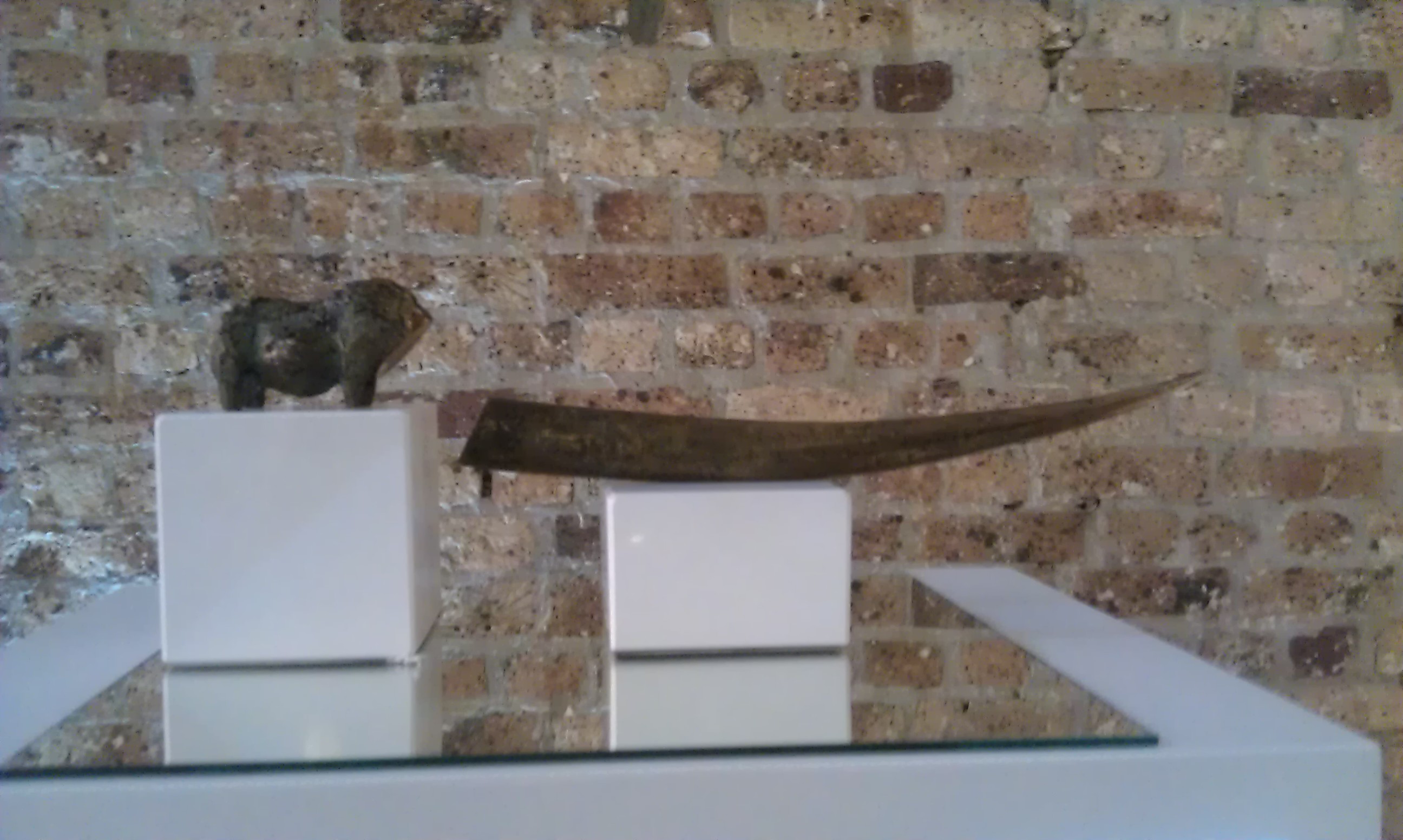 The sculptures are more metaphoric than figurative; his rhinos have no eyes or ears, and the conformation of their bodies lacks the detail of their actual physicality. In each artwork the scale of the horn is distortedly large, a comment on how the grotesque and fetishised manner (as in Gers’ tadpoles, it's about sex) in which the rhino has reduced to a single body part on which human desire has focussed, and are being murdered for an appendage which, if extracted surgically and safely, need not be lethal.

Stark, lonely, surprisingly delicate, these small, dense bronzes embody the rhino’s dilemma – as an evolutionary anomaly, a static and shy animal so easily killed in an age of automated weapons that it simply may not stand a chance.

Allerton’s work embodies the strange spirit of the animal's predicament; static but restless, gratuitous and forlorn at once. The pleasing lineaments of bronze attract our eye by the same lulling principle as Gers’ Blue Willow harmless decorative motifs of flowers and dragons. What both artists are doing, I think, is to invite us to admire the work with our customary complacency and aesthticisastion – influences and attitudes which feed our hunger for commodities. And then, once we are sitting comfortably, to deliver a brusque message about how we are consuming the world, one rhino horn and one elephant tusk at a time.