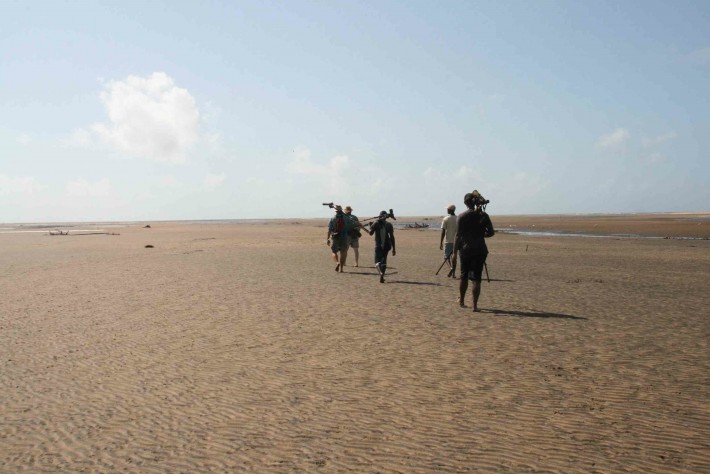 ‘Come on, how many Flamingoes do you see?’  The challenge comes from Colin Jackson, the research director at A Rocha Kenya. A group of us stand with our magnifying scopes and binoculars, bristling into the heat. I squint into the blare of tropical sun. The tide at the Sabaki rivermouth is out, exposing miles of sandflats that burn under a cloudless sky.

Only a few hundred metres away a cloud of pink leggy petals disperses and re-coheres. More Greater flamingoes are flying in from downriver. They land Concorde-like, necks outstretched, legs tucked in for touchdown.

‘Five hundred?’ I offer. The answer is closer to a thousand, I learn, after being taught a little-known technique for counting large agglomerations of birds.

I have just returned from two months on Kenya’s Indian Ocean coast. While there I was based at a conservation research centre, Mwamba (‘rock’ in Swahili), one of the A Rocha International network of research centres around the world. A Rocha (‘the rock’ in Portuguese – you may see a theme emerging) is a Christian conservation organisation that links faith and stewardship of the environment in ingenious ways.

Mwamba’s focus has long been on birds. Bird research, I learned, is best conducted by insomniacs.  We undertook the wader bird count that introduced me to flamingoes at the Sabaki river delta, a stunning open-mouthed river north of Malindi, we did all-night bird ringing sessions at Mida Creek, we walked ten kilometres on a Clarke’s weaver (an endemic and endangered species) survey in the Arabuko-Sokoke Forest (ASF), all of which required either getting up shockingly early or not sleeping at all, or both.

Colin Jackson is known for his total approach to birding: if he’s walking, eating lunch, or – more unnervingly – driving on the coastal highway, Colin is still birding. ‘Bohm’s spinetail,’ he shouts excitedly as we zip by the Giriama village just north of Mida Creek in the jarring little Maruti jeep we bomb around in on our  missions. ‘Now that’s birding, folks!’

The ASF is the largest remaining fragment in mainland Africa of a dry coastal forest which once stretched for 4,000 km from Somalia to Mozambique but which has since been reduced to no more than 400 square km. During my time at Mwamba I was fortunate to be able to work on a proposal for an innovative new Forest Visitor Centre which will hopefully be constructed for the Arabuko-Sokoke area, and to walk in this unique coastal forest, which has been declared a UNESCO Biosphere Reserve and has been identified by BirdLife International as one of the most important forests in Africa for the conservation of threatened birds.

But over 100,000 people live in villages bordering the forest, most of them subsistence farmers. Many people live on less than $1 a day, and so local people rely heavily on the exploitation of natural resources provided by the forest, particularly illegal logging and animal poaching. In response to this, A Rocha Kenya has developed a number of community-based conservation programmes which aim to conserve the ASF by simultaneously contributing to meeting the needs of people who depend on it and ensuring they benefit directly from its conservation.

One day we went to Arabuko to undertake a pentad, for a project called Bird Atlasing. The idea goes like this: a country such as South Africa – where it is already well underway – or Kenya is divided up into pentads, GPS-defined squares of territory five minutes wide by five mintues’ drive long. The atlasing project relies upon and brings together ornithologists, scientists, nature guides and mad amateur birders like me. Once in the pentad, one’s job is to identify as many birds as possible by sound and sight. These pentad lists are fed into a database, and so to produce a census and mapping of species. It’s birder nirvana: there is nothing a bunch of birders enjoy more than making lists. ‘Fire-fronted bishop’ Colin cries, before the rest of us have even noticed, let alone identified, the bird.

During my seven and a half weeks at Mwamba I also learned a great deal about the Indian Ocean. We were living on the beach; at night I went to sleep to the crash and fizz of waves and by the time I left could tell whether it was high or low tide or in between simply from the volume of the ocean’s roar.

The Indian ocean’s tide, at least on our stretch of coast, is erratic. In much of the world ocean high and low tides advance by a steady half hour a day. But our tides fluctuated wildly – high tide on a Tuesday would be 2.30pm, say, but the following day it might be 4.41pm. During my two months at Mwamba, instead of checking my email or bank account I puzzled over the tide tables to plan my day.

That the tide is so unpredictable is likely to do with local ocean gyres. These same gyres, along with the Kusi monsoon, bring an unwelcome cargo of tonnes of plastic to our shores. The beach is strewn with a high-tide hem of abandoned bleached flipflops, plastic bags, frayed toothbrushes, sheets of bubble wrap, yellow bottles of bleach, fragments of random plastic objects in tutti frutti hues, also faded by the sun. Pieces of ship’s rope in popsicle blue and mint green festoon the coastal bush like Christmas ribbon.  A plastic My Little Pony; a garish purple and gold shoe like an offcut from a Dolce & Gabbana runway show, children’s hair baubles – it all ends up on the beach.

‘Most of it comes from India or the Middle East,’ says Andrew McNaughton, a visual artist who works almost exclusively with what is collectively called marine debris. McNaughton lives up the beach from A Rocha in Watamu and collects these washed-up objects to create mosaics, objets d’art and furniture of startling lyricism and craftsmanship. Its power is in the dissonance between the formal beauty of the work and the devalued objects it is constructed from. Often only on closer inspection do you realise that the baroque border of one of his creations is made of toothbrushes, faded and frayed by their weeks-long sojourn in the Indian ocean.

On my last weekend in Watamu I participated in the International Coastal Clean-up. In just two hours over 200 volunteers collected 2,588kg of rubbish which had accumulated over just 10km of beach (pictured below, photo courtesy of Jess Simpson). Just as we were trawling the beach with our binbags, in Nairobi the terrorist attack on Westgate mall was beginning. It is a sobering time for Kenya.

I don’t want to indulge in solemn homilies about what we are doing to the planet and ocean – others, from the stark warnings issued conservation campaigners to McNaughton’s art and its refined message, are better at this. But at Mwamba I was constantly struck by how this delicate environment that was my home for two months is under an insistent attack; on the one side from a flotilla of sea-bound garbage, insoluble due to its materials, and the sheer amount of plastic chemicals are killing sea turtles with corneal cancer. And on the other side the land is being hacked at and chopped out, in part from local people’s desperation to make a living and to send their children to secondary school, which costs $270 a year in Kenya. This is often not wanton destruction: when faced with a futureless child or taking to the forest to harvest hardwood, I wonder how many of us would stand on our principles.

A Rocha Kenya has come up with an ingenious project which seeks to both address and redress the destruction of habitat and unsustainable farming methods. Its ASSETS education programme links good environmental practice to education, and provides bursaries to attend secondary school and university for 150 local students who would otherwise languish in their villages. It was a pleasure to meet some of these motivated young adults at Mwamba, and hear how their lives had been transformed through access to higher education.

Birds, turtles, mangrove protection, hardwood preservation, marine environments, coral protection and education – this is only a preliminary list of the impressive activities undertaken by A Rocha and other organisations in Watamu, such as the Watamu Marine Association. Watamu itself is a fragile peninsula, sandwiched between the Indian Ocean and Mida Creek, a vast mangrove-rich inland waterway. It is unique in Kenya and quite possibly along this whole stretch of the Indian Ocean, from Somalia to Tanzania. I feel lucky to have called it my home for two months. And I now know how to count Greater flamingoes.