Consciousness, character – and conscience – in the novel 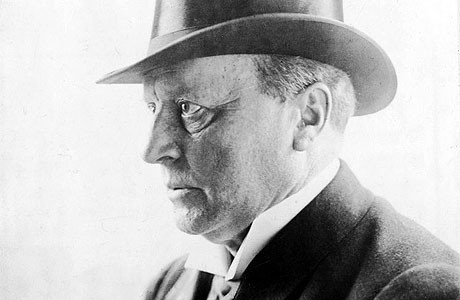 Henry James’s Portrait of a Lady is – along with Wings of the Dove – his most morally searching novel. I recently returned to the novel for my seminar on consciousness, character and the novel on the Theory and Practice of Fiction course I am teaching this year on the University of East Anglia’s creative writing programme.

There is a very famous scene which takes an entire chapter, Chapter 42, to play out. On the surface, not much happens. The heroine, Isabel Archer, sits by the fire in the house she shares with her husband, Gilbert Osmond. In the first part of the chapter her husband attempts to manipulate her into furthering the marriage of his daughter Pansy, Isabel’s step-daughter.

Osmond upbraids Isabel for her hesitation in setting in motion a marriage which she knows will not work. Her husband’s parting shot as he takes leave of her is that she ‘find a way.’ For the rest of the chapter Isabel thinks, and the fire burns low. The candles diminish. She stays there, alone by the fire, until dawn. At the end of the chapter, she rises and leaves.

In action terms, it's not Die Hard. But this chapter is the fulcrum of the novel. Through the course of that long night, James sloshes through the turmoil in Isabel's mind as she sifts through clues, realisations, fragments of understanding, discarded instincts, her own motivations, to try to understand how she has tilted her toward this moment of misery and – she begins to understand – betrayal.

The scene is demanding to read. It is dense with thought and recollection. It presents us with one of those controlled, supernaturally articulate furies of James, when he writes about a character's inner upset. What it achieves, I think, even more masterfully than to show a woman grappling with her predicament, is to chart how the process of how Isabel Archer comes to understand consciously the things she already knew unconsciously – about herself, her husband, her marriage, her lot. Conscience is thought to be a project of the conscious mind, but it might more properly reside in the unconscious, where it is formed by sparks and flares of instinct. Above all else, Portrait of a Lady is a dramatisation of one woman’s reckoning with conscience, and how, having discovered it, she must pit it against her desires and instincts.

In class that day my students and I considered this topic of consciousness, character and (although it isn’t in the seminar title) conscience  as a vehicle to think about our instincts, motivations and ambitions as fiction writers.

The novel is a way to investigate what it means to be alive. The novel can also be a form of abstract thought, given life and depth and feeling through the creation of people who don’t exist. We wondered, why are we bothering to do this? Creating characters, especially believable ones, is difficult. Living with real people and oneself is hard enough. But beyond this, what is our interest, our obsession even, with character. What exactly are we trying to work out – or resolve – through these people we create?

I thought of the book I have just written, and the book I am presently writing. Both are about values, particularly in situations where inherited corruption and abuses of race and history are present from the very beginning of an individual character's consciousness, and how these mechanistic forces leave their imprint on the individual. They are both set in Africa, where one has many opportunities to feel the pressure of history and politics, and to consider one’s position. It's impossible not to ask, in Africa, who has rusted so that I can prosper?

The other reason I’m thinking about conscience is more personal. Not long ago someone behaved in a way toward me that, while not outwardly shocking or violent, displayed a lack of conscience, among other things. In some ways this event has rippled through my life more powerfully than any dramatic or frightening occurrence I've experienced. I’ve had to search deep inside myself for the reason why I feel this way, and can only conclude that I have been operating with a moral code, or an idea of fair behaviour, that I was to a degree unaware of yet have internalised this in my conscience. Perhaps I even staked my life on it.

To get back to the project of writing a novel, conscience is not a necessary ingredient for consciousness, although if you reverse the two a different relationship applies. It is impossible for an unconscious being to have a conscience, yet so much of our lives seem devoted to the aestheticisation of our true conscience, and to the creation of a false self – a betrayal of conscience.

In a recent article for The Guardian, Rachel Cusk defends the kinds of creative writing courses on which I teach (Cusk also teaches, at Kingston University).  She argues that the popularity and appeal of creative writing courses might have less to do with the desire to become a published novelists, and more to do with people’s famished need to speak with and of a ‘true’ self: ‘What is it, this book everyone has in them?’ Cusk asks. ‘It is, perhaps, that haunting entity, the ‘true’ self. The novel seems to be the book of self.’ The would-be writer, Cusk suggests, is only that person trying to free him or herself from a prison of false expression which ordinary life has forced upon him.

The arena of self-expression and the arena of conscience are linked. Life as it is lived gives ample opportunity to discover your own principles, limits, fallacies, values and beliefs. But writing fiction is a way to extend the boundaries of that arena, and to think abstractly about what people will do and what they will not do, to draw the frontiers of empathy and understanding, and consider how events take us to inhabit simultaneous doppelganger selves, masqued alter egos who might, in the terrain of morality and assumption, never existed. In a nutshell: a good woman is made bad. The transformation is incomplete, though. She is both at once. The story is, why?

In class last week, we wondered if using the novel to explore conscience was now old fashioned. The novel in its modernist sense – ie post-Conrad, Henry James introduced psychology (or psyche, as the better term) as a definitive factor in peoples’ fates. Their goal seems to have been to explore the intricate fabric of choice, tendency, happenstance, circumstance, politics, fate, that collude to create what many of us think of as our fate. The external will of God, or some other determining deity, has played a very minor role in these investigations in the last fifty years.

Cusk does not say this in her piece, but her argument suggests that conscience might live in the writer’s idea of their true self, and that conscience risks being eroded by ‘life’. Instinctively, I agree with her about the core self, and the need to speak the truth and be heard. This careful listening is perhaps what my Masters and PhD students get from me which is most of value (and which I never had myself; I always wrote in isolation).

But what is it about so-called ordinary lived experience that nudges us into dishonesty and betrayal of our core selves? Some of this is obvious: the doublespeak of corporate and bureaucratic life, the envy factory of Facebook and other forms of social networking where we put forward heavily edited versions of the self; the compromise of family life; the indignity of bodily failure, the weak-willed gamesmanship of human relationships. ‘Writing feels like the opposite of being alive,’ Cusk observes.

Writing is a way to get beyond – rather than escape – the self. This is one of its great emancipations. For having transcended the boundaries of the compromised public self, writers become mulish, durable thinkers, not easily manipulated, non-conformists with a simultaneously unbreakable and flexible sense of self. Mr James  may have agreed that could be worth the effort of our often lonely fascination with the dimensions of the human spirit.