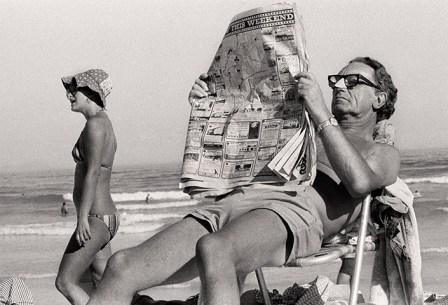 One of the enduring images of Apartheid is the signage of segregation; some of these, now housed in the Apartheid Museum in Johannesburg, South Africa, are reproduced in an elegantly analytical essay that accompanies photographer Steve Bloom’s exhibition of his street photography from the 1970s.  Net Blankes/Europeans only; Taxi Rank for Whites; separate entrances to workplaces, bus stops, train platform areas, audience areas in concerts and carnivals; separate benches and beaches - The business of strict racial segregation in Apartheid South Africa required a huge effort and resources on the part of the repressive state to maintain and enforce. I

It was into this rigidly demarcated world that Steve Bloom, a successful reportage, wildlife and photojournalism photographer, was born.  The photographs that make up Beneath the Surface lay gathering dust in a cupboard for nearly 30 years, Bloom – a modest but steely presence – tells us in an engaging and wide-ranging talk delivered as part of the London Festival of Photography held at the Guardian on 11 June. The Festival is the initiative of another South African, Brett Jefferson Stott. The audience seems to contain many people who were active in the anti-Apartheid movement in Britain in the 1970s and 80s, including MP Peter Hain.

Bloom shot these photographs in 1976, on the heels of the mass uprising in Soweto which resulted in children and students being shot dead by the security forces, a tense moment for South Africa, and which ultimately lead the Nationalist Party to tighten the screws of their Apartheid project. These images intrigued me because many are taken in places I know well, including Cape Town and Clanwilliam in the Cederberg. Cape Town is still an economically segregated city, and District Six, the area razed to forcibly evict Coloured families and communities out of the City Bowl area in the 1970s, is still a wasteland. So it’s not entirely correct to say that Bloom’s photographs show a vanished city, but certainly an earlier incarnation of it – unfamiliar to me, but, as the title says, somehow still beneath the surface in a strange archaeology of the present. When I send the photographs to my friend Pieter, who lives in Cape Town and who was an African National Congress (ANC) activist for many years, he writes back ‘those really were the bad old days.’

Bloom’s photographs show, through portraiture and the shoot-from-the-hip ethos of street photography, the inequality that was structurally created and conserved by the Apartheid regime. Although historical, it strikes me that these images are still political. ‘Photographs, whether in the mind alone or shared physical objects, help shape our memories and insight into events,’ Bloom writes in the accompanying essay.

But there’s humour, too: an Idi Amin lookalike parades through Cape Town in the back of a Cadillac, accompanied by Che Guevara-type molls with shades and fake machine guns. A photograph of the segregated audiences at a concert show dour whites, while the Coloured audience look like they might actually be having fun. A state-built ‘Dog Toilet’ on Sea Point beach (for white dogs? Black dogs?) is used as a vantage point by carnival spectators who climb up on its ramparts.

At the time he shot most of these telling photographs, Bloom was working for a mass market magazine company, airbrushing cover photos of idealised Afrikaner womanhood. On his days off he took to the street and shot in black and white. Frequently he got into trouble for documenting the dark side of Apartheid: Bergies (homeless people) on Table Mountain; two black homeless children sleeping on cardboard at the entrance to Barclays Bank. ‘They were all there,’ Bloom tells the audience. ‘If you look closely at the detail of the photos you can see the companies that were doing business with South Africa at the time.’ He points out Kentucky Fried Chicken, Coca-Cola, Pepsi, Barclays.

‘I didn’t realise I was doing street photography,’ Bloom tells us. ‘There was no such category at the time, anyway. But I did know I was going against all the classic rules of composition I’d been taught.’ Many of these images look like they have been shot literally from the hip: a black woman at the old Market in the Parade Grounds downtown – now a carpark – looms into view, her horned-rimmed glasses held together with tape. Another black woman’s face is cut off just beneath the eyes; she holds her index finger over her lips as if to say ‘sssh.’ The furtive angle and skewed composition accentuate how the spacial demarcation of Apartheid contorted the populace into unbalanced and ultimately untenable shapes.

Other images are direct reportage. An armoured police vehicle pursues a black man in downtown Cape Town for unknown reasons, cornering him and beating him with batons. Bloom shot the entire sequence, but there are only two exhibited; he tells us that the more graphic images which show the man being beaten he decided not to include, because the before and after shots tell the story mor effectively. A graphic depiction is not always necessary. The images capture the confusion of the pursuit as s seen by other acciental witnesses that day.

African reportage photography seems to be going through a golden age at the moemnt. Many of the photographers who work in this genre and whose work I admire are either South African or the country is their subject: Jodi Bieber, Jo Ratcliffe, Guy Tilim;  Finbarr O’Reilly’s photoessay on white poverty in Krugersdorp, for example. The lavish contradictions and inequalities of the country, while painful to live within and negotiate on a daily basis, provide a kind of violent inspiration for a new aesthetic in documentary photography, a sort of hybrid between traditional reportage and fine art photography.

Bloom’s 1976 body of work sits in the documentary/historical category.  However he has gone through radical shifts of direction and interest in his subjects through his career. These days he is largely a wildlife photographer. He shows us several astonishing images of zebra, camels, lions. His technique - particularly with low shutter speed -  is faultless, but he also seems to bring an extra dimension to his wildlife work that few photographers who manage to capture the perfect animal image can bring to the frame.

Bloom writes that he favours aesthetic qualities over rawness, even in his wildlife work. ‘As a photographer, I believe it is important to be deeply interested in who or what is being photographed. So it’s the photographer’s approach, rather than the subject matter alone, that largely determines the power within the image.’ The images in Beneath the Surface do not show, for the large part, overt violence, broken or bloodied violence. Instead they document everyday situations of the ritualised and quotidian humiliation and ‘apartness’ (the translation of Apartheid). Bloom was likely able to capture these effectively because he shot instinctively, and also because he was operating on home territory. He was intimately familiar with the regime, but, coming from a family of dissidents himself, not complicit with it. He took certain risks in photographing the sprawling shantytown of Crossroads, for example, and he wore his hair long – at the time unacceptable in mainstream South African society.  He doesn't come across as a natural radical, rather a probing and committed photographer, a watch-and-wait expert, but able to work on instinct, to feed off the moment. ‘Photography is like playing music,’ Bloom tells us. ‘It’s about the feel for the moment, a muscle memory, an unthought judgement.’

‘The past should never be forgotten,’ Bloom writes in his essay. ‘Apartheid was a terrible period in the history of south Africa.’ The racism that inspired the architecture of the society that Bloom grew up in has not disappeared, he warns us. ‘Look at Euro 2012, what’s happening in the Ukraine. The Dutch team being publicly harassed for having players who are not white.’  Bloom’s talk is inspiring. He reminds me how, over the course of a lifetime’s engagement with a passion and a form, our subjects, tastes and approaches can be transformed. But the same eye is behind the camera, always, watching the world in a state of flux.