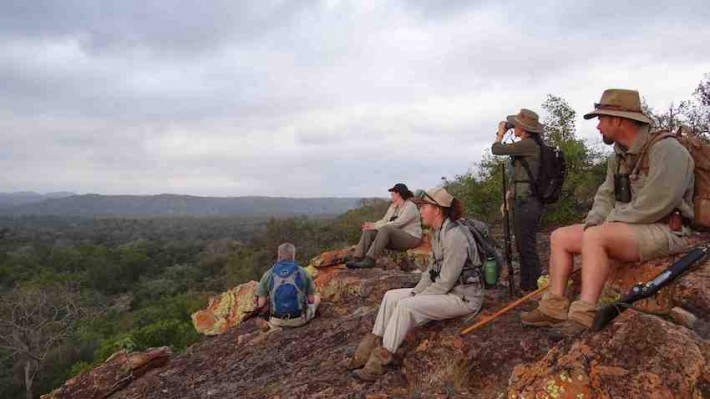 ‘Always walk with a torch at night. There are snakes and scorpions around. Also leopard, hyena, even lion. One night last year we were sitting here having dinner and a male lion walked into the kitchen.’

‘Did he find anything to eat?’

‘Us! He gave us a hungry look. We had to chase him out of camp.’

Rob is instructing our newly-arrived group on the dangers of this place. It seems entirely possible that a lion would saunter through camp, sniffing boerwoers, the excellent slim sausages we cook on the fire at night. The camp is unfenced and unpatrolled. Not far from here, a hyena killed a woman in her tent when she got up to pee in the middle of the night and didn’t zip up her tent properly on her return.

In bush camp we have a two-bar cellphone signal; we put a car battery on charge to power our phones and computers. The camp radio, our only means of communiqué with the world, squawks to life to read us rugby scores and lion sightings. The nights bring tok-tokkies – large flying beetles that barge softly into our faces.

We are students on a 55 day-long professional safari guide training course. In eight weeks’ time we will write an extensive exam and undergo a three-hour practical examination. We are up at 4.45am every day, 45 minutes before pale light begins to soak the sky. This is also lion rush hour, as it happens – lions are most active just before dawn. We get up in silence and walk through camp in darkness armed only with a torch. We do vehicle checks and the dust-down, then set the table for breakfast, put on hot water for tea and lay out rusks. On our Duty days we are responsible for all hospitality; making sure the cooler is stocked with drinks, that lunch is served on time.

Our instructors are well-informed young South African men who veer from taciturn to elated, if they happen to see a Chestnut-vented tit-babbler, for example. (It’s quite something, watching stocky men dressed in khakis and carrying a rifle jumping up and down shouting ‘Chestnut-vented tit-babbler!) The bird in question is common enough in the drylands to the west – the distant Kalahari – but is rarely seen in this humid bush. ‘It must be a vagrant,’ says Rob, our instructor. ‘Vagrant’ is birder-speak not for birds that doss on benches and drink beer from tins, but those species not normally found in an area but who sometimes pitch up while passing through.

We are all transfixed by the animals - by the boomslang that stabs the poor bushveld dormouse over and over again, like an appendage of the Alien in the horror film, the boa constrictor who sashays up the steps of our outdoor lecture room and who has all but propped himself up in a chair and started taking notes before a fellow student spots him and shrieks, the sweet nyala who dissolve into the bushes between our tents, the gigantic water monitor lizard, a mini-Komodo dragon, who is the real owner of my tent and the land it stands on, and who I have to face down on the path to my canvas home each afternoon.

I call it Animal Big Brother. Although maybe Animal Hunger Games is more appropriate. The reserve where we study extends to 33,000 acres and is entirely fenced by electrified wires. It’s a private reserve, far away from the nearest dusty, biltong-chewing town. The nearest espresso and national newspaper are six hours away by road in Johannesburg.

‘Reserve’ has a double meaning; as a noun it is a place of enclosure, ostensibly for protection, but also a kind of cage. In its verbal form, to reserve is to set aside. South Africa has a long history of setting aside land for game parks – the Hluhluwe–iMfolozi reserve in Kwa-Zulu Natal was established in 1895 and the renowned Kruger National Park three years later, making them the oldest wildlife reserves in Africa. Since the transition to democracy in the early 1990s private reserves have flourished alongside public reserves and parks.

Many private reserves allow bounty or trophy hunting. The typical image of the hunter, immortalised in Hemingway’s The Green Hills of Africa, is a canny stalker, a pursuer who develops a relationship with his quarry as he uses his wit to track the animal on foot through the bush. In some forms of trophy hunting, the pretence of pursuit is jettisoned. Animals are forced into smaller electrified enclosures where they can be shot; CCTV cameras and camera traps record their every move. A hunter, without fail a foreign male captain of industry type, is driven around in a Land Rover and pays for the privilege of shooting an animal who has nowhere to run.

Our course neither condones nor condemns hunting, but we discuss the rationale of its inclusion in South African conservation strategy. The official narrative is that bounty hunting pays for the other animals’ upkeep. When an ageing and infirm elephant is shot (it can’t be called ‘hunting’) the bounty price pays for two healthy animals to be bought from Botswana, say. When a lion is shot, a Sable antelope breeding programme, for example, receives nearly 5,000 pounds.

I wonder how he feels, this invariably German-Russian-American recreational hunter, as he puts the bullet between the eyes of his quarry. An expansive sense of power, perhaps, fuelled by a burst of testosterone as well as adrenalin – we are familiar with this from the shooting range; the rifles we are learning to shoot with precision as part of our training pack a higher muzzle velocity than military-grade weapons. But guides and hunters are a different breed. In guiding, shooting is for defence only and killing an animal is a last recourse. Men who have been guiding for years have been known to hang up their hat after having to shoot dead an animal that proved a danger to his clients.

By night hyena move through the sand river, only a metre or two from my tent. Each morning I see their tracks, sometimes so fresh the substrate still trembles. By day we all stunned by the heat. We put our heads under the water tap that runs hot at first from the metal pipe, then finally cool. Often snakes coil around the water pipe, as desperate for moisture as we are. We have nights of lightning and wind but by morning the inquisitive sun with its glucose heat has returned.

The course is difficult - even more so than I expected it to be. ‘See that tree?’ The driver who ferried us to the reserve where we would spend the first part of our course pointed into the bush.

‘Yes,’ I said, suspecting an ambush.

‘That’s a marula. By the time you come out of here you’ll be able to identify 32 species of tree at a glance. You’ll look at that – ‘ his finger went on a pointing mission, picking out one tree after the other – ‘tamboti, knobthorn.’ I looked bleakly at the stand of trees. They were identical, as far as I could tell; all big and green. I would turn out to have tree dyslexia. I struggle to see the detail, the identifying features.

When I mention this to Rob he says, ‘everyone has a weakness. You learn to turn them into your strengths. Birds were mine. It took me weeks before I could tell them apart. My instructor would point and say, what’s that, and I would say, it’s a bird, bru. Then he’d say, that’s the Greater yellow crackpot or something. I nearly gave up. But I worked at it, and now I’m good on birds.’

Much of our learning is experiential, from simply putting in the hours in the bush. Even ‘down time’ is instructive. Camp upkeep is part of our coursework. We hack at the bush on each side of the path with pangas and reorganise the quartzite stones that mark its boundaries. This provides interesting wildlife encounters. Enraged Swainson’s spurfowl waddle away, honking. Sometimes the shy, Bambi-like nyala come to watch our efforts, standing a few metres off in the trees, nervously licking leaves. I have become fond of the male nyala, who looks like a cross between a yak and a gnu, but prettier. Rob catches me murmuring to him. ‘I wouldn’t get too attached to him if I were you. The last nyala buck who hung around camp got chomped by a lion in the middle of the night.’

Our reserve is densely forested. It is the worst kind of bush to spot animals in. And given it’s a hunting reserve to say the animals are a bit skittish is like saying Vladimir Putin is a bit nationalist. They have learned to associate the sound of a vehicle with gunshot and with the attendant sudden disappearance of one of their number. Zebra are only a haze of individual barcodes melting into the forest. Waterbuck explode into the trees, the signature white ‘toilet seat’ ring on their rear the only part of the animals visible. ‘Look, more disappearing toilet seats,’ cries Rob.

In some ways these are good conditions to learn in: if you can correctly identify a sable antelope, distinguishing it from a waterbuck or a nyala bull on the basis of only its hock or a glimpse of its horns, then you’ll do well on the plains of Kenya, where animals file dutifully past in full visibility, draped against a sere sky as if for inspection.

Learning to do something so specialised, and in which the stakes are high, can be a chastising experience . Many days we encounter some kind of situation that could be dangerous. There is so much we don’t understand about this environment we have the temerity to move through, with its gladiatorial safari ants, trees secreting scalding latex, pop-up buffalo – buffalo have a knack for materialising from a bush you thought was just a bush – and exhaustively venomous snakes. It seems rash to think we can venture into it this way.

By the end of my course I know what the concave underside of a turtle is called (the plastron), the gestation period of an elephant (at 22 months, the longest of any mammal) and all the signature species of the South African biomes - my favourite being Succulent Karoo and the Bastard quiver tree, an all-time unbeatable name. But it’s not about quantum data. As it turns out, the bush is a text that can be read, but only with any degree of precision and knowledge after you’ve been reading it for a long time.

More than anything it is the detail of life in the wilderness that sinks in and which transforms itself, through familiarity, into knowledge. I can now tell how far away a lion is from listening to its roar (the sound carries up to eight kilometres); if I wake in the middle of the night I hardly need my watch the time: at 4.30am the Pearl-spotted owlet, a crepuscular species, is a reliable alarm clock; the tracks of animals outside my tent tell their own nocturnal story of explorations and ablutions and scuffles; the Senegalia nigrescens (the botanical name for the knobthorn) towers over me – I have finally conquered tree dyslexia.

That night we sit around the fire, or ‘bushveld television’ as Rob calls it. We haven’t seen television itself in two months, or had any contact at all with the outside world, apart from glacially slow-loading emails on our smartphones and roadtrips to buy biltong. A shriek rips through the night. ‘Bush baby,’ we say as one, reflexively, without even looking up.